Klipsch muscles in on the sub/ sat market with a compact reimagining of its Reference range. Mark Craven reports. Read our Klipsch reference r-8sw review. 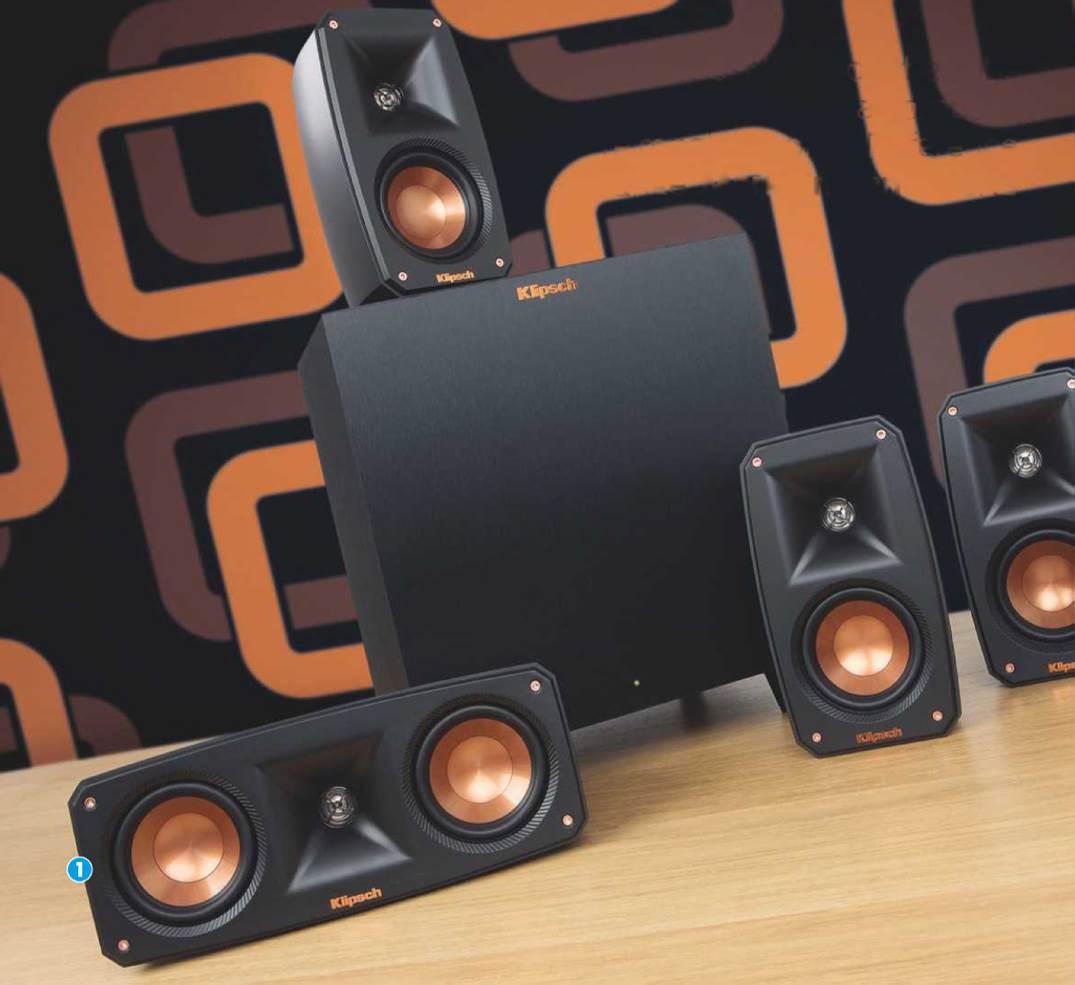 The idea behind Klipsch’s Reference Theatre Pack is simple: bringing the US speaker brand’s house sound, beloved by owners of its floorstanding models, to those with small rooms/budgets.

Klipsch considers the speakers in its Reference Theatre Pack as mini versions of its Reference series full-size cabinets. To that end, some of the company’s trademark technology is deployed.

The most affordable of Klipsch’s Reference stable

Each passive model features a horn-loaded high- frequency driver, a Klipsch speciality. Sat back in the cabinet is an aluminium Linear Travel Suspension (LST) tweeter, borrowed from the company’s Reference floorstanders but down-sized from the usual 1in to 0.75in. Opening up around it is Klipsch’s square Tractrix horn, which aims to target high-frequency delivery at the listening position, and improve dynamics and clarity.

Midbass, meanwhile, is handled by copper-coloured Injection Molded Graphite (IMG) drivers, giving these speakers the same two-tone aesthetic as the rest of the Reference lineup. Two are used in the centre channel cabinet; across the board all are 3.5in units, a bit of a step down from the 8in versions in the brand’s RP-8000F tower speaker.

The overall styling departs a little from the Klipsch norm. Many of its full-size speakers flaunt a no-nonsense design, with more right angles than a Rubik’s Cube convention, but these satellites are cut from softer cloth. Each cabinet is ever so slightly curved, while square corners are replaced by bevelled edges. And the black and copper look, if you ask me, works better at this smaller size.

Klipsch’s grilles snap into place courtesy of magnetic fixings, which is a nice touch at this price. Speaker terminals are inset and spring-loaded, most likely meaning some fiddling about with bare-wire cable, but this does mean the cabinets can fit flush to a wall (keyhole fixings are provided for wall-mounting). The speaker’s rear ports are also set back a little, giving them space to breathe.

The R-8SW subwoofer is less sexy to look at – basically a black cube raised off the ground by four feet – and the paper specification won’t set AV enthusiasts drooling either. It uses a single 8in downfiring driver (still copper coloured, even though you’ll never see it), adjacent to a down-firing port, and is powered by a 150W Class D amp. Connections are standard LFE/stereo phono.

Its low-frequency response is rated at a somewhat modest 38Hz, but as my colleague Ed Selley noted when he auditioned the R100-SW subwoofer as part of a floorstanding pack [HCC #293], Klipsch has a habit of getting the most out of not a lot.

You shouldn’t have trouble installing these speakers. Either place them on handy AV furniture, or wall-mount if you’re feeling flash, and find a spot for the sub, which is light enough to make moving it about in search of its optimum position painless. With it sat against my front wall, and a slim-line Marantz NR1710 AV receiver on processing and power duty (with a 100Hz rather than 80Hz crossover, as the satellites are rated down to around 110Hz), I was up and running.

The system’s performance is characterised by a good grasp of high-frequency and mid-range detail, and an energetic approach to the low-end. Vitally, it manages to create a bigger sound than some might expect from the size of the cabinets. High sensitivity ratings (91dB for the satellites, 95dB for the centre channel) equate to an easy drive, and make them ripe for partnering with a low-cost AV receiver.

I warmed up with AC/DC’s hard rock classic Thunderstruck (CD). Earlier this year at the Bristol Hi-Fi Show I heard this through a system with six subwoofers. Suffice to say the experience on this occasion was markedly different, but not disappointing. The R-8SW doesn’t add unnecessary bass bloat to the track’s pounding floor toms and kick drum, providing a rhythmic backbone for higher frequencies to work with.

Lenny Kravitz’s Always on the Run (Tidal Hi-Fi), in 2.1, finds the Klipsch speakers sounding a little less cohesive. As the instrumentation undulates and Slash’s fingers roam the fretboard, the soundstage begins to sound cluttered – yet when Kravitz’s spoken word outro kicks in, or a saxophone unexpectedly pops in with a jazzy motif, these moments stand out with clarity and surprising projection.

1. Tractrix horn-loaded tweeters are used across the board 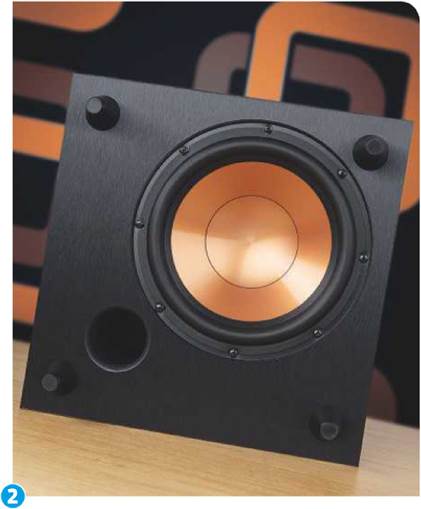 awe, and snappy effects placement, and the Reference Theatre Pack is up to the task. Bullets rip into the walls causing stone chips to fly, the soundtrack hammers along in the background, and my listening position is peppered with the sounds of various guns discharging.

There’s a focused feel to the performance, but a trade-off in total wraparound immersion. More direct than diffuse, these cabinets will favour smaller environments where viewers are sat in the sweet spot.

LF extension, unsurprisingly given the subwoofer’s entry-level spec, is more trouser tickling than flapping. When German planes unleash their payload on the beach in Dunkirk (4K Blu-ray), the R-8SW conveys the effect without fully finding the low-level reach of this exemplary

5.1 track. But there’s a tightness to its delivery that’s commendable, and as the sound designers place bass impacts further up the frequency range, the sub’s presence is more keenly felt.

It’s a system that gets other key aspects right. Its forthright nature extends to dialogue reproduction, and the dual midbass arrangement of the centre channel brings a heft to voices. Day-glo animation Angry Birds (Sky Cinema) features Sean Penn in a non-speaking but growling role, and the Klipsch array ensures this gets the laughs it deserves, while the intonations of the rest of the voice cast are well-defined. The film’s cartoonish Foley effects pack a punch, too.

More nuanced content, and general daytime TV viewing, is less this system’s bread-and-butter. The considered soundscapes of A Quiet Place, for example, can sound quite sparse thanks to the aforementioned lack of depth and dispersion. Detailing is good, even the film’s minutest sound flourishes, but it lacks that evocative feel.

The sub/sat speaker market isn’t as buoyant as it once was, with many companies choosing to maintain long- running product lines rather than try to reinvent the wheel, and the proliferation of soundbars dampening buyer enthusiasm somewhat. So new arrivals, in any form, are always welcome.

Klipsch’s package falls into the deliberately compact category, and the size of these cabinets should not be considered an irrelevance. Two systems under £ that I’ve loved – Wharfedale’s Diamond 11 HCP and Q Acoustics’ 3010i (not the more recent, and more expensive, Plus iteration) – are really sub/sat imposters, utilising larger speakers that bring an expected increase in scale over these more diminutive models. Put simply, you can get a bigger sound for the same or less money than you’ll find here, but you’ll have a bigger system to accommodate too.

Comparing apples to apples leads to packages like Cabasse’s Eole 4 or Monitor Audio’s MASS II, and this Klipsch array more than holds its own. Sure, the speakers aren’t as wide in their dispersion as the coaxial Cabasse spheres, or as downright stylish as Monitor Audio’s cutesy Mass models, but the sound is tight, focused and refreshingly energetic. And the asking price is right too

Best Klipsch reference r-8sw prices in the US ?