THE H65U8B IS probably Hisense’s most convincing attempt yet to muscle into the highly competitive mid-range TV arena. 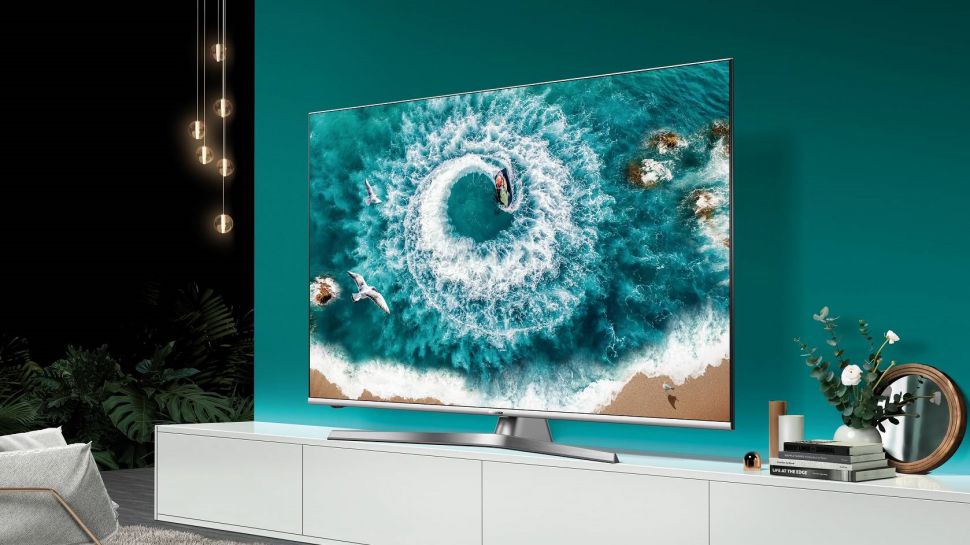 A good-looking 65-inch flagship, it has a tempting feature set, and is well worth shortlisting. Here’s why…

Build quality is polished and substantial. The edge-lit (ELED in Hisense speak)

U8B weighs in at 26.8kg, yet looks slick with its silver grey bezel. It sits on a wide V-shaped pedestal, which means you’ll probably need a fairly wide AV rack if you’re not wall-mounting.

AV input. There’s Ethernet if you don’t want to use Wi-Fi, plus a choice of tuners, Freeview Play or satellite.

As is increasingly common, the H65U8B comes with two remote controls. Let’s call them Sid and Eddie. Both find room for dedicated buttons for

POSITION: Top of the Hisense LCD tree, ahead of the U7B

Usability is great. Smart connectivity is provided by Hisense’s proprietary Vidaa U 3.0 OS, which I’m reliably informed is named after Iron Butterfly’s prog masterpiece In-A-Gadda- Da-Vida. It’s clean, functional and zippy (Hisense claims it’s now 50 per cent faster in use than the previous generation), with a horizontal bar to dispense all the OTT apps you’ll need.

Naturally, as it’s part of the Freeview Play club, you also get all the main catch-up services, plus UKTV Play, CBS Catchup and Horror Bites. The U8B will also play content from connected NAS and media servers.

Visually, the U8B is all about impact.

Its picture presets are characterised by rich hues, courtesy of its wide colour gamut panel, and snappy contrast, changing appropriately for HDR. In addition to regular HDR10 and HLG, this flatscreen is also compatible with Dolby Vision.

In Hisense’s Standard preset, brightness, contrast and colour saturation are kept on a loose leash. It has an unabashed vibrancy that makes it a go-to showcase, but some might find it over-worked; it even manages to make the deep ocean and shadowed confines of

The U8B is also available at 55in for around £

The U8B offers a solid mid-range performance when it comes to peak panel brightness. I measured HDR highs at 470 nits, using a standard 10 per cent HDR test window in Dynamic mode (it rates slightly less in Standard mode). That’s enough to put a believable sparkle into any Transformers collection.

There are caveats about black level performance, though. The screen suffers halos and blooming issues when bright highlights are presented against a black background, a consequence of its relatively unsophisticated local dimming algorithm.

The blackness of letterbox bars is often compromised by bright highlights from within the movie image frame. This also means there’s a limit to just how much shadow detail is preserved onscreen.

Sonically, the H65U8B is fine for casual viewing. The TV’s Dolby Atmos compatibility is welcome, but don’t expect anything immersive from its 2 x 15W stereo array.

Drill down and the H65U8B lacks the refinement that AV enthusiasts might seek, but when it comes to value for money and sheer visual bravado, it’s a hard proposition to argue with

This well specified 65-incher could be your first Hisense Tv. Dolby Vision and wide colour make it a crowd-pleaser.