For those wanting the legendary LS3/5a exactly as it was, an impressed David Vivian might just have discovered the answer. Read our Falcon Acoustics LS3 5a Gold Badge Review. 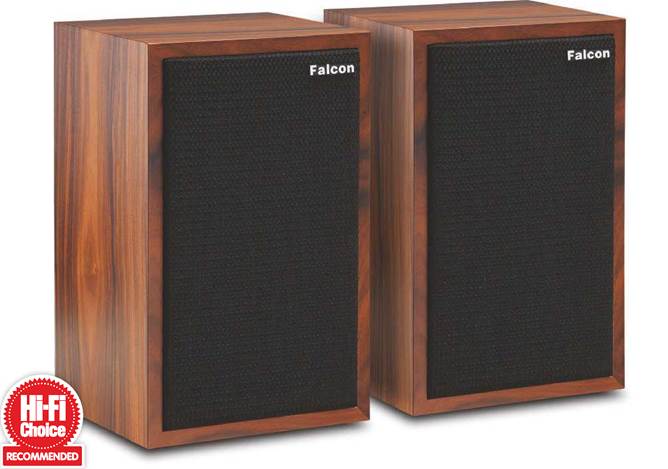 A confession: in over 30 years of reviewing, I have never heard the BBC-developed LS3/5a, either as a rare original or any of the more recent incarnations built under BBC licence. Is there a more iconic small speaker still in production? Probably not. In some ways this puts me at an advantage as I can listen with fresh ears and no residual experience of the early LS3/5a or its myriad latter-day clones to clutter my opinion. Also, the subject of this review is universally held to be an object lesson in meticulous verisimilitude. To borrow a slogan from another famous Brit-fi brand, it’s as close as it gets.

It helps, of course, when your new/ retro BBC-spec mini monitor is the product of a company founded by Malcolm Jones, the man responsible for designing, developing and engineering the original LS3/5a’s KEF B110 woofer and T27 tweeter.

The imperative to stick to the original recipe saw Falcon source some of the remaining Tygan grille cloth from Denmark while the Baltic ply with Beech fillets for the cabinets was a little easier to locate in the UK. But these were just peripheral

considerations. For true authenticity and building on its unique use of newly manufactured B110 and T27 drivers, Falcon completed its so-called Silver Badge LS3/5a with the original 15ohm crossover (later versions went to 11ohm for higher sensitivity).

Falcon couldn’t leave it at that and, as a running upgrade to its LS3/5a production, already sold in matched pairs, elected to include a few material substitutes, in particular polypropylene film capacitors standing in for the now unavailable polycarbonate items. Along with ultra-low inductance resistors, the revised components are mounted on a new multi-layer FL6/23 printed circuit board hand made to BBC/Falcon specs in the UK/ EU and hand assembled by Falcon.

Thus installed from January 2020, Silver Badge became Gold Badge, though owners of the earlier version can retro-fit the FL6/23 Gold Badge crossover with a DIY kit or the help of a dealer. The relatively narrow, at least by modern standards, 70Hz – 20kHz (+/- 3dB) frequency response and low 83dB sensitivity remain the same, but as far as Falcon is concerned this is the best sounding LS3/5a it has made. In truth, there’s probably nowhere left to go – a sentiment equally applicable to the immaculate build and range of natural wood veneers, available in Cherry, Walnut, Rosewood, Burr Walnut and Yew.

Falcon recommends sitting the LS3/5a Gold Badge on a sturdy, high- mass stand, which is just as well as I was going to use my regular Slate Audio 24-inchers anyway. I wonder if I should try to choose a front-end system to stoke some synergy with what I’d read about the baby BBC monitor’s strengths and weaknesses at least. Maybe a turntable with a warm balance, possibly an expensive valve amplifier with ample real world muscle and control. In the end I decide against it. Far more interesting and relevant to see what it makes of the modern digital and solid-state components I usually listen to. Currently that’s an Audiolab 6000 CDT (HFC 447) CD transport, Chord Electronics Hugo TT2 (HFC 468) DAC and Hegel H120 (HFC 460) integrated amp, all connected together with super crisp and transparent Nordost cables – the action to take place in my smaller listening room, natch.

To dial myself in (I’ve been listening to big floorstanders for the past few months) I dig out DALI’s Spektor 2 (HFC 441), a brilliant budget box that is fast, fun and entertaining with very decent detail and good bass for its size – which is about the same in height, but a little deeper than that of the LS3/5a. It’ll get me in the ballpark, I reason, and possibly embarrass the Gold Badge Falcon in certain areas as over achieving cheapies sometimes do. 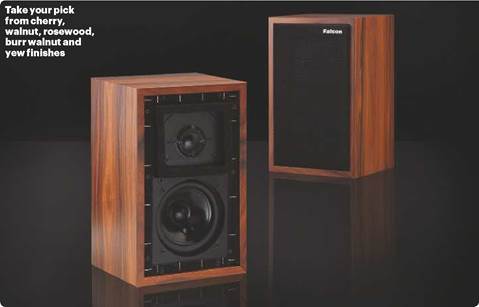 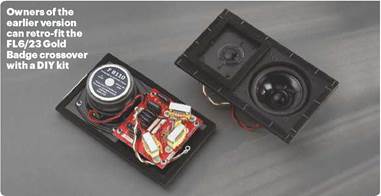 It doesn’t happen. Not only does it not happen, the Gold Badge eclipses the best efforts of the DALI so effortlessly and completely that the ‘dial in’ exercise is largely a waste of time. Almost unbelievably, my first impression is of sonics approaching the best I’ve heard in the room, irrespective of speaker size, with exquisite tonal balance, low distortion

It certainly has its limitations, but the LS3/5a is capable of exquisite results

and a soundstage that, avoiding the common trick of being aggressively projected, has startling in-room presence, falling back behind the plane of the speaker with a depth and breadth that extends far beyond the walls. Playing Invisible Man from Queen’s The Miracle – maybe not the most flattering opener for a speaker so lavishly praised for its handling of small ensembles and chamber music – the sound is anything but scaled down to suit, making immediate musical connection through a combination of transparency, extraordinary precision, focus and a phenomenally open and resolute midband. All right, stadium loudness isn’t a starter, but the song’s signature shrieking synth stabs arrive with so much bite and dynamic intent, it makes me jump. True, there isn’t much bass weight, but it doesn’t seem to matter, so good is the drive, speed, texture, articulation and tunefulness of the lower registers. If Kate Bush and Sarah Bareilles sound astoundingly, seductively intimate, I’d expect that. The sheer enjoyability of a clearer, leaner, lighter take on Queen, however, comes as a genuine surprise.

The Gold Badge can sometimes seem a little bright and hard edged with certain electronics and material. I’m sure more sympathetic matching will fix that without detracting from its midband magic and ability to sprinkle a little stardust on all kinds of music.

Contrary to expectations, this take on the LS3/5a is a very relevant and contemporary-sounding speaker. It may have its limitations, but more importantly it’s capable of exquisite results and, as such, comes very highly recommended indeed.

Though lacking the ‘letter of the licence’ authenticity, Falcon would certainly regard the likes of Rogers and Sterling as producing worthy rivals that stay close to the original LS3/5a design. Spendor and Harbeth still have some skin in the game, too, though their current efforts are more conscious updates of the LS3/5a rather than replicas of the seventies design and, if you’re not so much of a purist, are certainly worthy of an audition too.