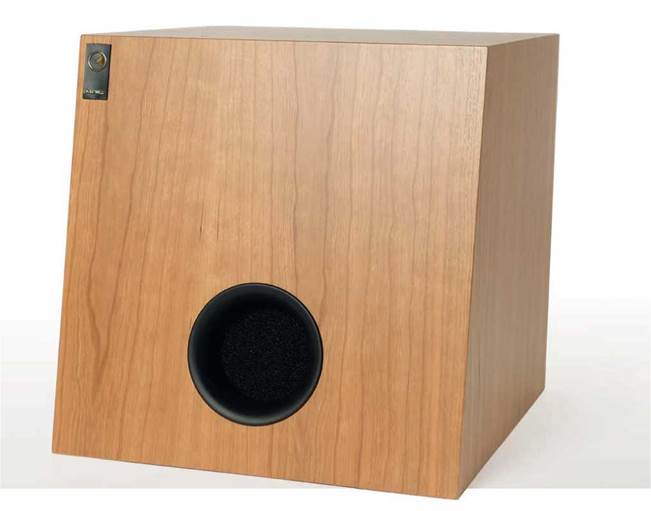 It is a truth universally acknowledged, that a pair of LS3/5a loudspeakers in good condition, must be in want of a bit more bass. OK, so my days as Jane Austen’s stunt-writer are somewhat numbered, but you get the point. The LS3/5a (in all its guises, even including the LS3/5) is a little bit light in the bass, in that there is precious little content below about 100Hz. The usual way to boost this is with a subwoofer, and typically today that means a powered subwoofer. The Chartwell SUB3 by Graham Audio is the notable exception; it is a passive bass cabinet designed specifically for the classic BBC design, and adds a little bit more bottom end to the classic broadcast bookshelf. As Chartwell also makes both the LS3/5 and a version of the LS3/5a, it’s a logical add-on.

Like all Chartwell and Graham Audio designs, the SUB3 use the company’s own Volt-built design drive units, and is the work of Derek Hughes, son of Spencer and Dorothy Hughes (of Spendor fame), and one of the keepers of the BBC flame. The SUB3 is a small, bass-extension cabinet, effectively a sealed box upper chamber containing a 155mm Graham/ Volt bass driver and a crossover, with the lower chamber containing a port constrained by a foam bung. There is no internal damping or wadding, and the thin-walled cabinet doesn’t even feature any bitumenised internal wall cabinet treatment. Connections amount to two pairs of speaker terminals; one from the amp to the SUB3, and one from the SUB3 to the LS3/5 or LS3/5a.          ► 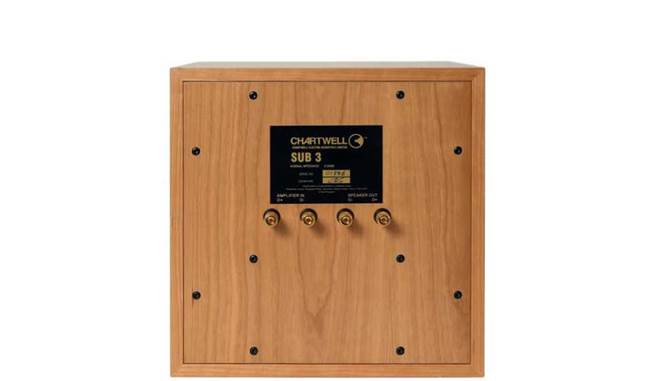 ► The front baffle (I’m not even sure if that’s the right word, given there is no front-firing bass driver) is sloping slightly, otherwise the SUB3 is a perfect cube, and sits on a quartet of spikes. Although sold in pairs, they are identical, and each is designed to sit between your amp and your loudspeaker, both electrically and physically. Ideally, the SUB3 should sit close to the wall behind each LS3/5 or LS3/5a, rather than next to it. This helps provide some boundary reinforcement, and – from a purely room acoustics point of view – the single worst place to put a bass loudspeaker of any description is the place where the loudspeakers typically sit in the room. So, having these bass speakers set back is a good thing; just make sure this isn’t an attempt to add small speakers into a massive room and have several metres between speaker and sub. As there is no phase control (no controls of any kind, in fact), setting the SUB3 far back in the room and having the main loudspeakers 3m or more into the room could put the bass slightly out of sorts with the sound from the BBC designs.

As the principle changes between the LS3/5 and LS3/5a involve the high-frequency driver and crossover, the SUB3 is designed to fit in with both, extending the bass of the speaker into the double-digit zone. Chartwell claim a response down to 35Hz, and while that might be the case, there’s not much going on at that bottom end of the bottom end. Instead, a real- world in-room response is going to be something nearer to about 50Hz. This is still a marked increase in bass compared to the 100Hz of the main loudspeaker.

This is a one-trick pony, but it’s a very good trick. The SUB3 is designed to only work with the BBC loudspeakers, and even matches the impedance of an LS3/5 or LS3/5a loudspeaker (although in fairness a nine-ohm design, not 15 ohm versions, such as the Falcon Acoustics LS3/5a tested on page 47… it will work, but the impedance mis-match is not ideal), and Chartwell supplied a pair of LS3/5 (and a set of Something Solid stands designed specifically for that cabinet size). It uses a fourth-order bandpass crossover, meaning it has no interaction with the loudspeaker itself, and it just kicks in below the end-point of the LS3/5 or LS3/5a. As that design comes to a fairly abrupt stop around 100Hz, the SUB3 fills in the spot from 100Hz down to (theoretically) 35Hz. If you play the SUB3 without a loudspeaker connected, you hear just how effective that bandpass really is; the speaker has a sharp stop at 100Hz where almost no frequencies above that leak through. The character of the loudspeaker remains untouched through the SUB3… almost. If you don’t get the installation right, there is either slight bloom and exaggeration between bass and sub-bass, or the reverse happens: a very slight gap at the inflection point where SUB3 ends and LS3/5 begins, almost as if the two products were teenagers at a prom night, hugging the walls and afraid to dance with one another. Get it right, though, and it’s like someone put on the Barry White records (I’m showing my age here!). When it’s all done properly, the two interact seamlessly and the tonal balance is nigh on perfect.

The SUB3 rounds down and rounds off the LS3/5 to modern ears, too; we are used to small loudspeakers packing more of a bass punch today.

► It’s an easy product to discuss because this is an LS3/5a only with more bass. It doesn’t change the LS3/5 or LS3/5a for the better or for the worse, it just adds more bass to the proceedings, and that bass is in keeping and in character with the BBC design. It’s precise, accurate, and a little bit laid- back. It’s not the most dynamic subwoofer sound, but neither should it be if it is to retain what makes the LS3/5a an LS3/5a.

The bass extension isn’t enough to make the LS3/5a fill a bigger room, nor is it fast and deep enough to make the loudspeaker the first choice for drum ‘n’ bass, dubstep, or grime. But, I’d suggest that the LS3/5a probably isn’t your first port of call if you are playing back to back Stormzy cuts. On the other hand, if you chose the LS3/5 or LS3/5a and love what it does but would just like it to do a little more at the bottom end, then the SUB3 is the perfect choice. The SUB3 rounds down and rounds off the LS3/5 to modern ears, too; we are used to small loudspeakers packing more of a bass punch today, and while the SUB3 isn’t big on ‘punch’ it does bass extension and gives extra texture in those bottom octaves.

I am loathe to rely simply on classical music for this, in part because the association with the LS3/5a and classical music is almost a cliche, but the recording that best encapsulates what the SUB3 does best is Paul Galbraith’s interpretations of Bach Sonatas and Partitas for the violin [Delos], played on an eight string guitar held like a cello. This unique instrument has a sound akin to a Spanish guitar but has a richness of tone and depth of bass that is lost to the LS3/5a (it just sounds like a guitar), but with the SUB3 in place, those last two bass strings are more sonorous and resonant, and the difference between this and the instrument of Segovia shines through. A larger orchestral piece shows the LS3/5 or LS3/5a has more substance, some weight, and greater majesty to the sound. But such things are relative, and anyone expecting a full-range sound from a small speaker are going to be disappointed. That being said, the LS3/5 and LS3/5a are small speakers for a small room, and in that small room context, I suspect the SUB3 might just be as much bass as the room can take.

Moving over to the rock end of the spectrum, the bass from the SUB3 is more ‘majestic’ than ‘fast.’ This works really well in adding some bottom end solidity to classic prog works from the likes of Pink Floyd. It’s worth noting, however, that while listening to Fragile by Yes [Atlantic], this showed where

the SUB3 both worked very well and didn’t quite keep up. Tracks like ‘We Have Heaven’ and even the bass-oriented ‘South Side of the Sky’ were excellent and the SUB3 really filled in the bass perfectly, but the opening ‘Roundabout’ was a little too fast-paced, for both the LS3/5 and the SUB3. A bigger loudspeaker (if that fits your room) or a well-installed active subwoofer would give both the speed and depth needed to play this track with the kind of intensity it requires, but that would change the nature of the LS3/5 or LS3/5a in the process, thereby defeating the object of the exercise somewhat. I think many existing owners of the classic BBC speaker would happily go for a bass add-on that retains the loudspeaker’s agility than impose a new character.

The LS3/5 and LS3/5a are icons of classic British audio, and the SUB3 extends that icon further into the bass without tampering with what makes the LS3/5a so special in the first place. Those who have lusted after LS3/5 or LS3/5a designs – or those who already own a pair – will accept no substitute and brook no change to the design. For them, the SUB3 is a perfect solution to the ‘not a lot of bass’ problem inherent to that iconic loudspeaker. That classic BBC small monitor for small rooms need not sound quite so small now. +