As a bottom-of-the-range budget option, it’s nowhere near as slender or as well made as its higher-spec siblings and. frankly, feels a bit low-rent. Tap the rear of the device and it sounds hollow; apply pressure and it bends disconcertingly; and the plastic power button on the bottom edge feels flimsy. 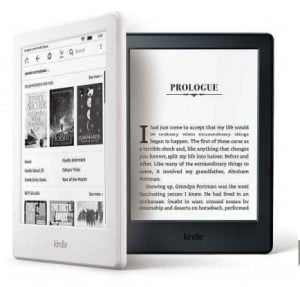 Still, once you’ve switched it on. there’s every chance you’ll completely forget about these cost-cutting compromises, and that’s mainly down to its excellent E-Ink Pearl screen and slick performance.

Sure, the 600 x 800.167ppi resolution display isn’t as sharp as on its pricier rivals -which all have more modern. 300ppi E Ink Carta screens – but you have to look hard to tell the difference. And the contrast between page background and text is excellent. Turn down the light on the Oasis and sit it next to the Kindle, and you’ll be hard pushed to separate the two.

What’s likely to cause more annoyance is that the Amazon Kindle 2016 doesn’t have a light for reading in the dark and you can only turn pages using the touchscreen. There’s also no 3G version of the basic Kindle, although with Wi-Fi hotspots so prevalent these days that’s not a major concern. Also. 4GB is plenty of storage for thousands of books – just make sure you plan ahead and you’ll never be short of books to read.

Elsewhere, the basic Kindle is all but identical to Amazon’s more expensive models. The touchscreen uses infrared rather than capacities sensors, so although the screen surround is slightly raised, it works perfectly. The new Kindle feels just as responsive, and battery life is a claimed “up to four weeks” – although this is with wireless turned off and reading limited to 30 minutes a day.

Once it’s switched on, you’ll forget about the cost-cutting compromises

As for the user interface, the new Kindle benefits from the same overhaul that Amazon recently gave its more expensive e-readers. That means improvements to Page Flip, which gains a thumbnail view, making it easier to flip back and forth visually through your eBooks: plus social-network integration and family sharing.

There’s even Bluetooth audio connectivity, so those with sight problems can navigate the Kindle interface by touch and have their eBooks read aloud to them through headphones.

The latest Amazon Kindle is a basic e-reader, and its design, build and specifications reflect this. Once you look past the features it lacks, however, a highly capable e-reader emerges. It’s responsive, lightweight, great for reading and as good as any of its rivals for usability and content. Simply put, the Amazon Kindle remains the best e-reader you can buy.

■ up to 4 weeks battery life

No light for reading in the darkk