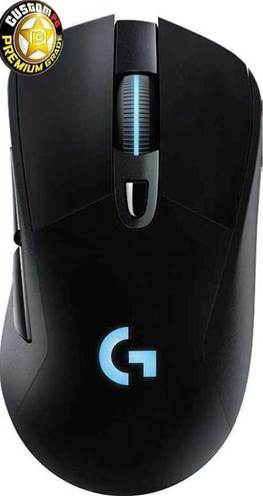 The Logitech G403, in both its wired and wireless forms, was supposed to be a cut-down, affordable option for gamers seeking performance without the frills. However, both mice have ended up being a little more expensive than you might expect for a product with such a description. Nonetheless, thanks to fantastic core performance, they both remain great gaming mice.

The G403 Wireless, then, offers a very basic set of features. It has just six buttons – left, right, DPI, back, forward and scroll- wheel-dick, and although it has a weights system, it only provides room for one extra 10g weight. However, this simplicity is partly what makes this mouse so appealing. Instead of packing in superfluous features, Logitech has concentrated on the basics.

As such, the ergonomics are fantastic if you’re right-handed. It’s compact, yet it also has a relatively higher central portion and wide rear that allows for a degree of grip with the lower section of your hand, while the two sections of rubber on either side provide a decent grip for your thumb and little finger There’s not much of an overhang at the top into which to nestle those fingers, but the grip from the rubber is good enough to keep it secure.

The overall button layout is also fantastic. Every single one of the six buttons just sits exactly where it should, and feels easy to reach and unobstructed by clutter.

Having the DPI switch as a single button works surprisingly well too. It’s relatively 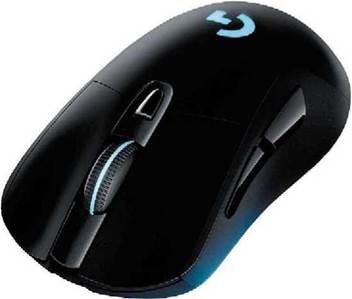 large, so it’s easy to tap it while in the heat of battle, without fear of missing or hitting the wrong one out of several DPI buttons.

Styling, though, isn’t this mouse’s strong suit. Its simple all-black livery is inoffensive, but the rather mundane Logitech logo, single strip of lighting on the scroll wheel and general lack of flair means it feels more basic than beautiful, especially compared with some of the competition.

The wireless system, meanwhile, uses the same cable-with-tiny-adaptor deal as most of the other mice on test this month.

The cable itself is a plentiful 2.13m long and braided, plus it’s notably thick

You can choose a single color for both the wheel and logo too, and adjust brightness. Alternatively, you can opt for a lighting cycle or breathing effect, the rate and brightness of which you can also change. Button assignments can also be changed and macros applied. It works well.

The Logitech G403 Wireless nails its remit of delivering all the performance that matters and none of the unnecessary extras. It feels great and tracks perfectly; wireless performance is fantastic, and it’s button response and layout is perfect. If that’s all that matters to you then it’s a great buy. Its price of inc VAT might not leap out as a bargain, but the G403 covers all the essentials for the cheapest price on test.

Not an outright bargain, but a truly fantastic core experience makes the G403 a great low-cost wireless mouse.