Take a walk on the dark side It used to be fairly easy to predict what each new generation of JVC projector would give you. A bit more brightness, even more contrast, and maybe a new calibration tool or two. 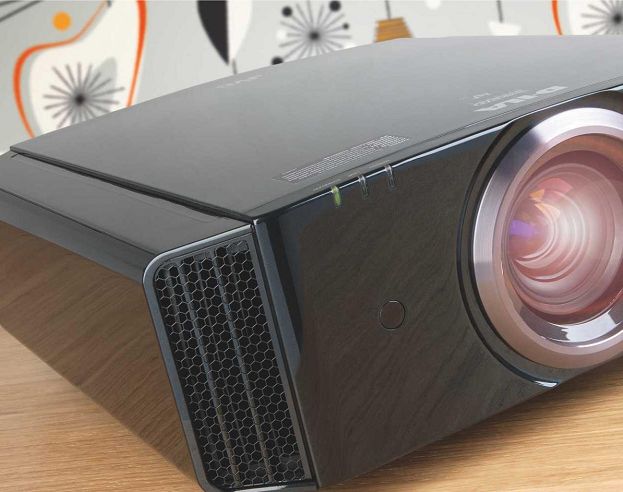 It’s starting to look, though, as if JVC has gone as far as it can in contrast and brightness terms with its proprietary D-ILA projection tech. The new X5900 claims the same 1,800 Lumens brightness and 400,000:1 dynamic contrast ratio figures delivered by its predecessor, the X5500.

This home cinema beamer also enjoys precisely the same serious but attractive design, and uses the same 265W lamp. Plus, like the X5500, it features what might be called a ‘pseudo’ 4K resolution, rather than the full 3,840 x 2,160 McCoy, via JVC’s e-Shift system. This places two 1080p chipsets in sequence, diagonally offset by half a pixel. This creates an image with essentially twice as many pixels as a standard 1080p one, with JVC’s Multiple Pixel Control (MPC) processing joining the images together to deliver a 4K effect. The e-Shift system can work with either native 4K material or native HD sources, although JVC claims processing improvements introduced for the X5900 reflect the growing availability of 4K content.

Other updates for this PJ include refinements to JVC’s Clear Motion engine for reducing blur and judder; a useful entry in the projector’s menus that shows an HDR source’s maximum content light level (peak luminance) and maximum average light level settings; and manual gamma setting adjustments you can use in conjunction with the projector’s auto-calibration system.

The X5900’s connections are all found on the projector’s rear. Both HDMI inputs support data flows up to 18Gbps, enabling them to play 12-bit, 4K/60p and 4:4:4 chroma subsampling images. It would be good to see Sony’s 4K projectors following JVC’s lead in this respect.

This is a dream to set up. Zoom, focus and image shift are all motorised, with plenty of precise flexibility. The remote control is helpfully laid out and brightly backlit, while the menus are straightforward once you’ve familiarised yourself with the occasional bit of jargon.

I was struck by how much cleaner and more convincing JVC’s e-Shift 4K effect is here than I’ve seen it looking before. During an early sequence in Oblivion, where Jack flies over the planet surface looking for a damaged droid, there’s practically no sign (with either the HD or 4K versions of the film) of the gentle noise that I’ve noticed in detailed or subtly toned areas of the same sequence with previous e-Shift iterations. This immediately makes the image look more natural and involving.

The latest e-Shift improvements also benefit detail. While e-Shift has always made HD look more dense, with native 4K sources it’s always come up short of the crisp, immaculate and detailed appearance such content enjoys on Sony’s native 4K projectors. With the X5900, though, e-Shift closes the gap considerably.

With the 4K Blu-ray of Lucy, for instance, pore and blemish detail on Scarlet Johansson’s face during extreme close-ups is more readily apparent. The reduction in noise mentioned earlier helps to ‘sell’ e-Shift’s resolution-enhancing qualities, too. It all adds up to a sense of the enhanced depth and space associated with the best 4K images. To be clear, however, shots across the city in Lucy do still lack that absolutely pristine look you get with native 4K displays.

When there’s motion in the frame, clarity remains tangible thanks to the improved Clear Motion Drive/Motion Enhance settings. Previously I’ve tended to turn these features off, but here, on their default settings, they really help retain the image’s 4K-like sharpness during action- packed scenes without generating unwanted side effects.

Nor does the image look unnaturally fluid with the Blur Reduction options set to their lowest levels.

The most unexpected improvement yielded by JVC’s revamped processing finds the X5900 faring much better both at avoiding clipping (loss of subtle shading and detailing) in bright image areas, and delivering more subtle greyscale detailing in dark picture areas.

With all previous JVC PJs, their lack of brightness has been too profound to make HDR feel consistently convincing; dark areas have looked over-dominant and hollow, while bright areas have veered towards flat and empty. On the X5900, HDR material generally appears more well-balanced and natural.

I should stress at this point that HDR here bears little resemblance to HDR on a high-quality TV. The projector’s 1,800 Lumens of maximum light output can’t rival the explosive dynamism and lifelike light levels associated with flatscreen HDR. But you do get a sense that you’re seeing a more dynamic image than you get with SDR content. Furthermore, baseline brightness doesn’t appear heavily depressed in order to create enough breathing room at the other end of the spectrum. HDR pictures no longer look routinely darker than their regular counterparts.

The PJs lack of brightness is rather exposed by content that’s been mastered to an extreme peak light level (usually 4,000 nits). Such dynamic HDR grading – as used, for instance, on the 4K Blu-ray of Pan – can see objects framed by a much brighter backdrop looking so dark they almost become silhouettes. When Peter stands in front of the windows of Blackbeard’s ship, he doesn’t look like a fully realised, natural part of the picture. Night scenes in Pan’s forest and mine locations also suffer with crushing of shadow details in the darkest areas. The X5900 fares better with gentler HDR sources. Dunkirk, which tops out at just 323 nits, and deploys a maximum frame-average light level (FALL) of just 144 nits, appears terrifically well-balanced.

The X5900 is an excellent colour performer. It’s capable of delivering the entire range of the DCI-P3 colour space used in commercial digital cinemas (and which forms the basis of the expanded colour range found on most 4K Blu-rays), and it’s capable of doing this with impressive accuracy and authority. Obviously it would be better if the X5900 had more luminance on tap to help it ram home the wider colour ranges associated with most HDR content. But even as it stands the X5900’s colour response is good enough to make you feel like you’re watching a true ‘next generation’ image. 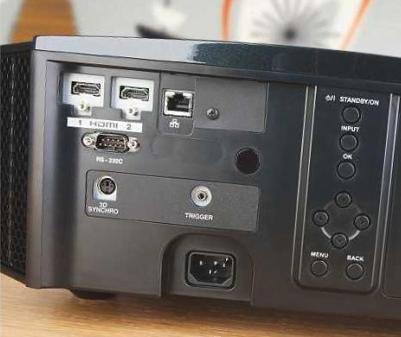 The X5900 also looks nothing short of resplendent with any decent-quality standard dynamic range source you throw at it. Colours are beautifully nuanced and natural. Black levels are pretty much perfect, and far beyond anything any rival projection technology can deliver. Details look crisp and clean, underlining the new-found skills of the latest e-Shift system. Motion is believable, and standard dynamic range images are bright and punchy.

The JVC’s run of form even extends to 3D. Issues with crosstalk (double ghosting) that have plagued many previous JVC projectors have been largely dealt with, leaving you with crisp, immersive 3D visuals only let down by the way they project much darker than 2D images.

The X5900 wraps up a mostly excellent performance by running reasonably quietly. You can barely hear it at all when watching SDR using the Low lamp option, and while the cooling fans do clearly run harder with HDR and 3D, the sound is smooth and consistent enough to let your brain tune it out.

The price puts the X5900 between Epson’s LCD- based 4K scaling TW9300 and Sony’s VPL- VW260ES. Both have their merits – the former for its brightness, that latter for its native 4K playback. This JVC is peerless for its money, however, with the all-important matter of black level. Add in processing tweaks that deliver improved HDR and pseudo 4K abilities and you’ve got JVC’s most compelling entry-level PJ for generations

This optical sensor, which fine-tunes gamma, colour and colour temp, is compatible with JVC’s downloadable (Windows/ Mac) auto-calibration software, as is the company’s pricier Elite model.

Much improved processing joins class-leading black levels to deliver JVC’s most compelling and current-feeling mid-range projector since the arrival of 4K.