If he still had a pair David Vivian would dig out the flares to review this blast from the past that sounds anything but dated. Read our JBL L82 Classic Review. 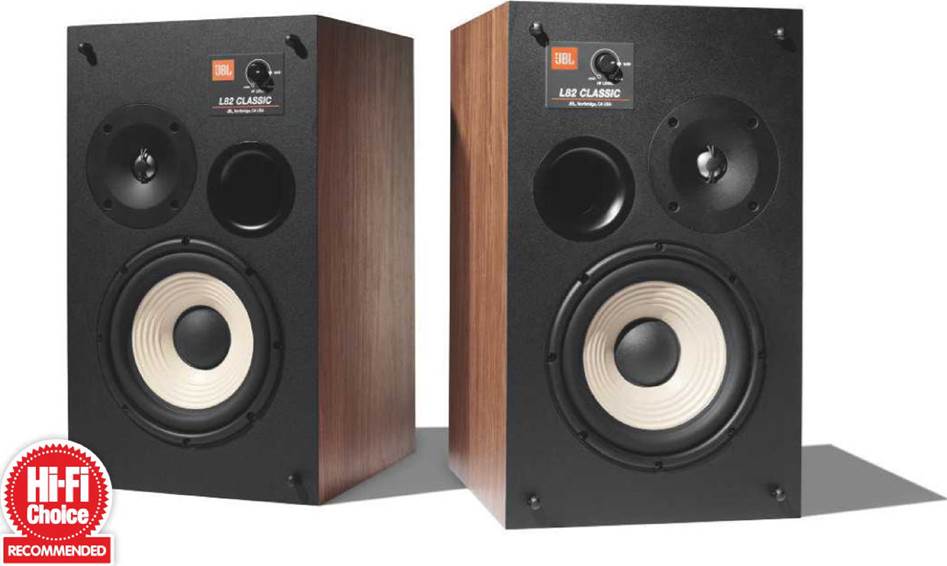 Retro is enjoying something of a revival, and not just with hi-fi. The so-called restomod trend is furnishing car enthusiasts with modern updates of beloved classics such as the E-type Jaguar, early air-cooled Porsche 911s and even The Saint’s (Roger Moore era) Volvo P1800. They all evoke powerful nostalgia through immaculately realised visual and tactile stimuli while seeking to eliminate the ravages of age and the limitations of old tech. Sky-high desirability, it seems, is assured.

The parallel trend in audio perhaps isn’t quite so tightly defined, but it does seem to have tapped into a yearning to turn back the clock and is perhaps best illustrated with loudspeakers. Attempts to recreate/ reinvent the BBC’s classic seventies nearfield mini monitor, the LS3/5a, have been on-going for years but, more recently, the likes of Spendor,

Wharfedale and JBL have released modern interpretations of classic designs, the most intriguing of which are bulky, wide-baffled speakers on squat stands – a type of configuration popular half a century ago that had all but died out, but absolutely nails that seventies vibe.

JBL must have felt it couldn’t go wrong with the second coming of its L100, a reworking of its best ever selling speaker and arguably the most iconic design of the era. It wasn’t wrong. That the look of the ribbed white woofer cone and orange Quadrex foam grille (now available in blue and black as well) were back in all their old-school glory stoked up a perhaps irrational craving for bygone standards, but the internals were bang up to date. Not that it sounded like just another modern large box. Although fluent in all the key hi-fi metrics, the new L100 Classic cleverly retained some of the original’s heavy-fisted confidence, warmth and relaxed sense of fun.

The L82 Classic before you is half the price of the L100 Classic and, if not quite half the speaker, is notably more compact and so easier to accommodate. Unlike the three-way L100 Classic, it isn’t based on a JBL model from the seventies but inspired by the L100 Classic itself – a smaller, two-way, sibling built with the same mix of retro and modern. As such, it teams the L100’s 25mm titanium dome tweeter and waveguide with a 200mm white paper pulp cone mid/bass driver. It might be a driver shy, but the distinctive wide baffle layout is much the same, incorporating a panel and dial that can be used to adjust the tweeter’s output level while the tweeter itself is offset (to the inside or outside depending on which way round you position the speakers).

With JBL being part of the giant Harman International corporation, accessing the latest facilities and tech to realise the retro conceit was never going to be a problem. It informs the carefully optimised chassis and motor system of the mid/bass driver, also its accurate alignment with the front- fi ring reflex port. With the crossover point set at 1.7kHz, the tweeter takes on more of the workload than in the three-way L100 Classic where it isn’t required until 3.5kHz. Unchanged between the models, however, the waveguide surrounding the dome is there to improve dispersion and slacken off the rigidity of the listening sweet spot.

A sizeable box for a standmount, then, the 12.7kg weight squares with the solid build but isn’t quite the heave expected to nestle it onto the relatively low-slung, gently upward tilted JBL JS-80 stand (£ and essential for that authentic seventies aesthetic if not, as we’ll discover later, the very best sonics). With that iconic Quadrix foam grille set off against the cabinet’s attractive walnut veneer, the L82 Classic looks terrific, especially from a distance. Closer inspection betrays an absence of the studied slickness and attention to detail displayed by B&W, KEF and Monitor Audio as they battle for ‘best dressed Brit speaker’ bragging rights, but the finish is okay and perfectly serviceable. The single binding posts round the back are sturdy and of decent quality, too.

I listen to the L82 Classic in both my large and small listening rooms with a variety of different upstream components and am frankly amazed by how consistently enjoyable it is. Yes, some setups sound better than others, but only in matters of largely academic hi-fi minutiae. Whatever the flavour of its surroundings and partnering kit, the speaker seems suffused with the performance of the music, even when aspects of reproduction are pulled in one direction or another. This is not something you can say of many speakers in my experience.

In view of this, and despite achieving the cleanest, most detailed ‘hi-fi’ presentation with the speaker perched on my 24in Slate Audio stand (not a great look) and driven by Primare’s I25 Prisma Class D integrated amp (HFC 461), I finally settle on my smaller listening room, JBL’s own low-slung, upward tilted JS-80 stand (offset tweeters to the inside) and the warm tonal tilt of Electrocompaniet’s ECI 80D Class A/B integrated amp (see overleaf) with digital sources routed through Chord Electronics’ Hugo TT2 DAC (HFC 468) and MoFi’s StudioDeck+ turntable (HFC 466) teaming up with Chord’s Huei phono stage (HFC 459)for vinyl. Many rewarding late evening listening sessions ensue long

The Quadrex foam grille is available in a choice of black, orange or blue

after the time I originally put aside for auditioning. I reacquaint myself with everything from Lenny Kravitz to Diana Krall, not least because, in addition to its ability to play very loud without strain or harshness, the JBL doesn’t shed its musical mojo at low-to-moderate volume levels – an unexpected delight and undervalued real-world asset I reckon.

omission. One such example is Falcon Acoustics’ LS3/5a Gold Badge (HFC 470), which all but mesmerised me prior to installing the L82 Classic. That it’s able to make me smile following so much exposure to the Falcon’s sheer sonic luminosity through the midband and treble speaks volumes, not because it’s an LS3/5a kind of speaker, but precisely because it isn’t.

No superpowers on show here except, perhaps, one. Charisma. The L82 Classic is a poor monitor. By the strictest definition of the term, its sound is a tad coloured. Resolution of fine detail isn’t its calling card, either. If you want to hear how Trevor Horn sewed Yes and Owner of A Lonely Heart together at the mixing desk, look elsewhere. If, on the other hand, you want to know why he bothered, the JBL will take you on a stereo ride filled with energy, purpose, surprising subtlety, satisfying dynamic contrasts, a big and deep soundstage and truly great bass. You might even experience pangs of nostalgia for the way hi-fi sounded in the seventies. But experience better. Yello’s Core Shift from the duo’s Point album, by the way, is simply epic.

The bottom line is this: the L82 Classic won’t unearth everything there is to know about a recording, but if there’s anything good about it it will share it with you with spirit, elan and a generosity defined by its own character and not some notional ideal. A bit like Clint Eastwood, it has star power that’s unchanging and transcends whatever it’s playing.

The L82 Classic is not, I suspect, a speaker that will hit it off with the most demanding of audiophiles. It simply isn’t transparent enough. And that’s fine. There are plenty £ alternatives with X-ray vision. As a speaker that does its thing with attitude and style – essentially amplifying the musical goodness in whatever it’s fed and to hell with ultimate fidelity – it emphatically hits the spot and I applaud it for that •

Think retro is a marketing gimmick? The L82 Classic will change your mind

Best JBL L82 Classic prices in the US ?

The only speaker that emulates the L82 Classic’s mix of qualities is its larger L100 Classic stablemate – at twice the price. Where the L82 plays rather fast and loose with hi-fi strictures, the identically priced and similarly sized SMC19 from ATC is an exemplary student and the differences in presentation could hardly be more marked. Both are hugely appealing, but for wildly different reasons.