The ZOTAC GTX 1080 AMP! Extreme graphics card is one of the first NVIDIA GTX 1080 to come to our labs for reviews, and to be quite honest, we were quite stoked about it. ZOTAC is known to be a GPU of choice for many gamer and enthusiast overclockers due to its ability to push the highest overclock numbers while keeping the card cool without outputting too much noise. 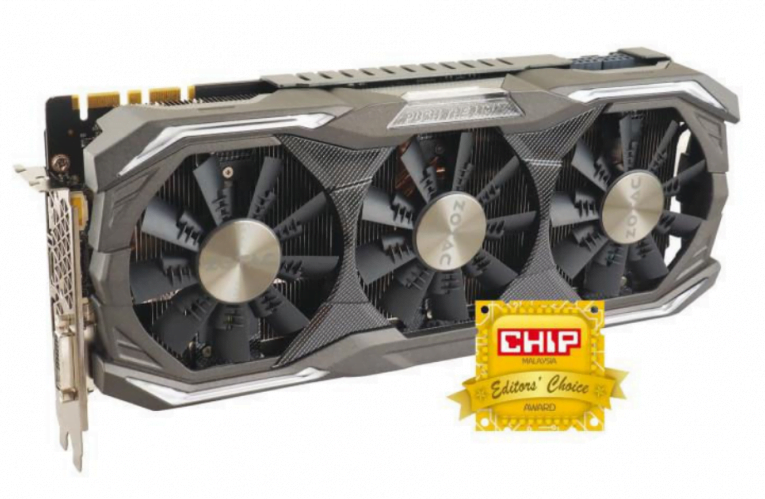 This particular card takes up two expansion bays in a case, however, due to the large ICESTORM cooler, it does, in fact take up two and a half slots from the inside. This means that depending on your motherboard, the card will cover up the PCIe slot right underneath the one that’s being used. It also weighs 1.4KG, so it’s highly recommended that you pair this card with a motherboard that has reinforced ports for better support.

The card itself requires two 8-pin PCIe ports to run, and as far as video out ports go, the card is equipped with three DisplayPorts, one HDMI 2.0 port and one DVI-D port.

First thing we should probably mention is that this card sports a massive cooler.

The great thing about this is that regardless of how fast the fans are spinning at, the fans are silent throughout our many game sessions with it. Simply by adjusting the fan RPM, we are able to let GPU Boost do its thing and let the card ramp up its performance as high as it needs to in order to play the latest games at the highest settings and resolutions possible.

As far as performance is concerned, we managed to get games like Rise of the Tomb Raider, Doom and Grand Theft Auto V at the highest settings on 1440p resolution without any problems. As far as rendering games in 4K resolution goes, we were still able to get very respectable frame rates out of these games, and the card itself was very silent even as the three fans were running at 100 percent. 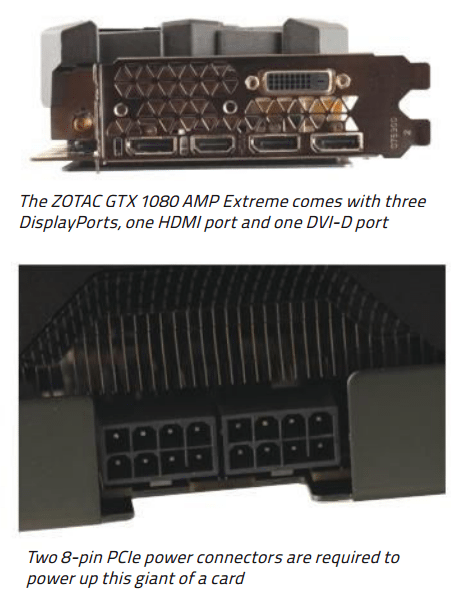 As far as temperatures go, the ZOTAC GTX 1080 maxed out at about the high 70 degrees Celcius with the fans running between 75 to 100 percent speed. Performance wasn’t compromised, and we didn’t see any thermal throttling happen, which definitely makes this card a great choice for a high-end gaming machine.

The ZOTAC GTX 1080 AMP Edition is  a powerful beast of a GPU. Definitely  recommended if you’re looking to build a  powerful high-end GPU.