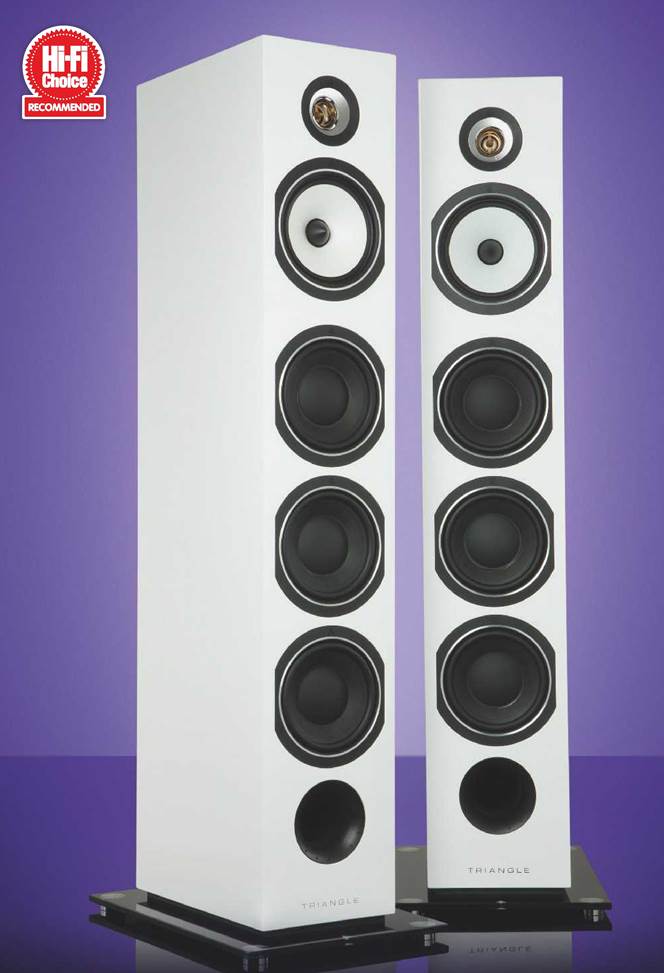 The genuine materialisation of Triangle’s philosophy”, is how the company describes this substantial floorstander – despite not being the flagship line. Instead, the Australe EZ is the top of the Esprit range, which is two below the top Magellan. You might say it’s ideal if you want the best performance and value mix.

With its huge 55-litre cabinet, this speaker needs a large stage on which to act. It is packed with all sorts of Triangle technology usually reserved for the Magellan range. The most interesting is arguably the so-called Dynamic Pulse System – or twin horn-loaded tweeters to you and I. Basically, there’s a second high- frequency driver at the rear, handling

the highest frequencies without – as the company claims – interfering with the main tweeter driver on the front. It has a different crossover setup, starting from 5kHz to the front’s 3kHz. Each tweeter is Triangle’s own 25mm TZ2510 unit with a titanium dome and compression chamber.

Below this, the 165mm midrange driver kicks in. This features the company’s beloved natural cellulose paper cone, and it’s combined with a small pleat peripheral suspension to increase the emissive surface area. The membrane profile, suspension shape and dust cap are all said to be inspired from the Magellan project. The half-roll suspension is made of a combination of foam and treated rubber, and is claimed to have low inertia. At 310Hz, it hands things over to those three bass drivers; also 165mm in diameter, the cone uses a new composite material made of wood pulp and carbon fibre. The motor sports an over-sized voice coil.

The cabinet itself is surprisingly inert and echoes far less than I expect when I knock it with my knuckles.

The so-called Driver Vibration Absorption System means it’s very well braced, and there’s a largish glass plinth supplied that is also carefully damped by a thick perforated rubber plate. There’s a choice of either aluminium spikes or rubber feet that go into the base. Round the back, in addition to the aforementioned second tweeter, you’ll find the largish reflex port and a neat looking brushed aluminium terminal board with bi-wiring sockets and jump leads if you want to eschew a second cable run. The cabinet comes in a choice of gloss white or black, and the finish is very good indeed; Triangle supplies a pair of cotton gloves so you can keep it that way while unpacking and setting up.

Once you’ve unboxed it and hauled it into your room, it requires quite a bit of fine tuning to get it set up correctly. I find it booms in my room just a little more easily than some speakers, and of course the rear-firing tweeter adds an additional element to consider during placement. Because of its weighty bass, the Australe EZ works best well out into my listening room – around 70cm from the boundary wall, slightly toed-in.

The manufacturer claims a 92.5dB/1W/1m sensitivity with a nominal impedance of 8ohm, making it an easy load on paper at least. It has a claimed power handling of 150W so can work with both low-ish and high-power amplifiers. Triangle says the frequency response is 35kHz to 22kHz; while I’m unable to verify the upper limit, I can vouch for the fact that this speaker goes down very low. Indeed, it’s one of the standout features of what is both an interesting and highly capable design.

Going from top to bottom, treble is open, lively and fast, while the midband is couth, smooth and detailed. Bass is taut and articulate, with exceptionally good extension for the price – it has an extra bottom octave over most. The good news is

that it manages to package all this together in an efficient way; despite the profusion of drive units it sounds pretty even and well integrated.

It’s always good to start with a nice, smooth seventies recording, so Wings’ Cafe On The Left Bank goes on first, and the speaker gives a fine account of itself. There’s a strong, gutsy bass that wrestles large amounts of low frequencies into the room with consummate ease, plus a light and spacious treble that sounds just a little tinselly for some tastes. It’s quite an old-school metal dome sort of flavour, giving a satisfyingly metallic lustre to hard-struck hi-hat cymbals that really sparkles out of the soundstage. The good news is that it’s never harsh or grating, unlike so many of the breed.

It does, however, seem quite different to the smooth midrange driver, which if anything – in my listening room at least- seems just a tad recessed. Certainly, it’s not as shouty as some speakers at its price in the presence band, and that for me is a good thing – especially if your system is already a little in your face.

I am impressed by the way it conveys backing vocals – you can really hear into the harmonies, which are set clearly apart from the rather busy and compressed mix. This is a very dry analogue recording from Abbey Road, and the Triangle 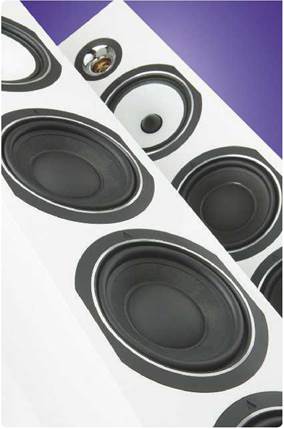 presents this well. When I switch to Isaac Hayes’ Cafe Regio’s, the different acoustic at the Stax recording studio is clear. Although this isn’t one of those speakers that deliberately sets out to be forensically detailed at the expense of everything else, it is nevertheless a subtle and refined performer that tells me a lot about what’s going on.

Moving to electronica, and Uncle Bob’s Burly House is a joy to behold. It’s got seemingly endless tracts of grunting sub-bass and the Australe EZ serves them all up with a smile on its face, so to speak. I push up the volume on my Arcam P49 power amplifier (HFC 409), and sit back as this loudspeaker moves vast amounts of air around the room. The really impressive thing is that it’s all kept well under control, and there’s little in the way of cabinet resonance to interfere – which is unexpected at this price. Indeed, my room becomes the limiting factor here, the loudspeaker showing up its not-so-rigid rear wall. Even at very high listening levels, the bass remains controlled and tuneful, but I opt not to push things as I am concerned that plaster may fall off the ceiling and cracks appear in the wall.

The Triangle offers a truly wideband listening experience and is really quite fast, giving a pacey rendition that is helped in no small part by a fast and slightly forward pair of tweeters. These also seem to contribute to a great feeling of space. Rush’s The Camera Eye is rendered in a most impressive way here; it’s a big production with a wide soundstage and the Australe EZ really lets me know about it. It gives a strong centre image to Geddy Lee’s vocals, and conjures up a spacious recorded acoustic into which the listener can peer with ease. Interestingly, this speaker tends to hang the images back behind the plane of the speakers, more than throw them forward and at you. It is as if I’m listening into an expansive ‘sound space’, rather than

having it fired right at me. All the elements in the mix are well conveyed, and the speaker shows its quality by allowing me to closely follow individual strands of the mix, regardless of how loud others get.

All of this makes for an excellent speaker at the price, but not a perfect one. Some will find the Australe EZ to be a little boomy; it has a greater propensity to boom than most of the big floorstanders that pass through my listening room. Careful placement can ameliorate this, but you really need a largish room with everything that can move nailed down. Its smooth midband means it’s not an in-your-face sound, while its powerful, snappy and dynamic – surprisingly uncoloured – sound and enjoyably rhythmic nature makes the Esprit Australe EZ an impressive floorstander for the money

Best Triangle Esprit Australe EZ prices in the US ?

Supplied in its satin white finish, British- made Spendor’s A7 floorstander costs exactly the same as the gloss white Triangle. Yet they’re two very different beasts. The former is over 200mm shorter and 20kg lighter. As such, it simply cannot match the scale and heft of the French loudspeaker’s sound and doesn’t go down anywhere as low in the bass either. Yet there are compensations – the A7’s midrange is lucid and has a lovely tone, and the treble is less ‘metal plated’ than the Triangle’s. It’s a slightly less impressive but more subtle speaker that many may prefer.

DP: Who is the typical customer for this loudspeaker?

HD: Being a high-performance product at a reasonable cost, Esprit EZ speakers are dedicated to music lovers that seek to make their first serious investment into a good hi-fi system. The Australe EZ is the flagship of this range and the tallest loudspeaker, so it’s for those with big listening rooms, and people looking for high performance at low frequencies.

How would you describe Triangle’s house sound?

We have a very romantic and emotional approach to making music. A loudspeaker has to be lively and provide a very wide soundstage to the listener. After many years of research, we found the special tweeter technologies we were looking for, providing energy and subtlety. The horn has the advantage of increasing the efficiency of the driver – you immediately feel the liveliness of music and you are transported right to its heart. Our main sonic character comes from our paper midrange unit with special cloth surround. We’ve been working on this for more than 35 years, mastering its behaviour. This reproduces voices very naturally, and it mixes with the energy of the horn- loaded tweeter – that’s the essence of the Triangle sound.

What are the benefits of the Dynamic Pulse System?

Developed for our Univers Series launched in 2002 – the then equivalent of our Signature range – this technology has been improved over the past 15 years especially during the development of the Magellan series. Research has been conducted to find the right frequency cut off for the two tweeters, and the result is improved imaging and reduced directivity. The listening spot in relation to the speaker is less critical as a result.