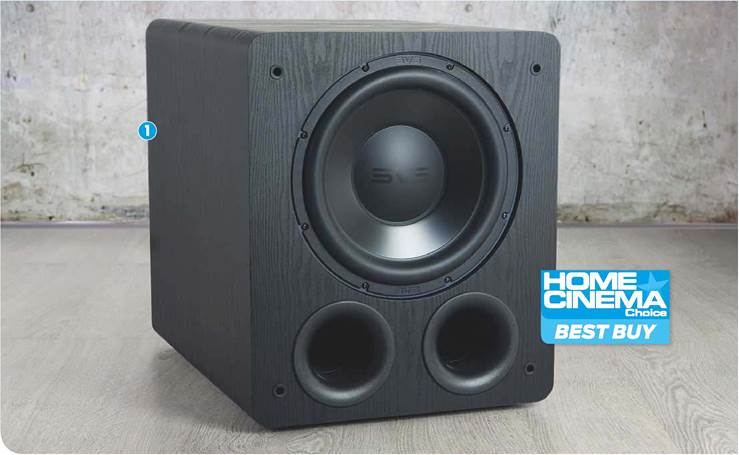 SVS HAS A settled strategy when it comes to its subwoofer stable: it sells both ported and sealed variants, to give consumers a choice. The smaller sealed models are for those wanting to install a sub in a typical living environment (or, as SVS puts it, ‘mixed media’ entertainment systems), while the larger ported offerings are for dedicated movie rooms.

And, perhaps for those who like to be terrified by bass.

In a ported sub, the self-damping nature of a sealed design is removed, giving the driver more excursion potential – required to maintain output level as frequencies drop lower. Combined with the sub’s natural (but carefully calculated) system tuning frequency, the result is a more consistent output. Meaning when your movie sound engineer gets happy with the LFE track, you’re going to hear/feel it.

The PB-3000 tested here claims a 16Hz reach, and aims for a flat response to around 20Hz. By comparison, the smaller, sealed SB-3000 [see HCC #298], while ultimately rated at 18Hz, will begin to roll-off much higher (and more gradually). In smaller listening environments, room gain will compensate for some of this; but in a larger space, SVS’s ported design should be more suitable.

And it would have to be a larger space as the PB-3000 is a bit of a beast. Measuring 55cm high, 46.5cm wide and 59cm deep, it’s by no means subtle. Just to make blending it into your movie den even trickier, it’s only available in a black ash finish – the funkier piano gloss black option of the SB-3000 is missing.

Weighing 37.3kg, you might want a buddy to help you unpack it, but once in place it’s not too hard to shift around, with SVS’s screw-in rubber feet creating space to get your fingers underneath.

The front face showcases the sub’s 13in driver and twin 3.5in ports. You’ll also spot four holes to affix the sub’s rather ungainly steel mesh grille. I expect magnetic fixings aren’t used for fear of the grille simply being blown off.

That 13in cone is identical to the one used in the SB-3000, only in that model it pretty much fills the entire baffle. Here it looks almost small. Toiling away behind the scenes to give the driver its get-up-and-go are an edge- wound voice coil, dual ‘massive’ toroidal magnets and an FEA-optimised cast aluminium basket. Plus, of course, an amplifier – in this case an 800W Sledge Class D amp (rated at 2,500W peak output) and associated DSP.

Old-fashioned dials would arguably be better, if the sub wasn’t also compatible with SVS’s Bluetooth control app, which is quick to get up and running, and makes tweaking simple. The app also introduces a three-band parametric EQ tool for frequency fine-tuning, plus Movie, Music and Custom presets.

Specs-wise, the PB-3000 should have enough about it to make a serious impression. And that’s exactly what it does.

The general idea is that sealed subwoofers exercise better control and precision, while ported models are more gung-ho and, perhaps, unruly. That never seemed quite the case with the PB-3000. Even compared to its sealed stablemate (during my audition I was able to switch between the two), I was startled by its ability to take hold of a bassline or LF effect and grip it tightly. At the same time, its greater power at the very low-end made film mixes seem… bigger. A bit like the subwoofer itself.

The ‘first to the quay’ race sequence from Ready Player One (4K Blu-ray) required the PB-3000 to do a lot of heavy lifting, some of it subtle, some of it not. Even smaller details, such as the Delorean being assembled, benefited from the scale of the sub’s output. It was adept at finding soundtrack elements and imbuing them with perceptible but delicate weight.

The chaotic, multi-vehicle rampage that ensues was a riot of bassy blasts and tones across the low-frequency range; the lightcycle engine showcased a smoother sound than the throaty roar of the monster truck, which slammed into competitor cars with delicious, punchy thunks. Wrecking balls cracked into the asphalt, with a little bounce to the effect.

As Parzival slides his car under a truck, the bass in the soundmix gives way to calm so the audience is focused on the tinkle of the coins he’s pausing to collect. Here the PB-3000 wasn’t quite able to stop on a dime, if you’ll pardon the pun. The SB-3000 handled this brief soundtrack nuance better.

But then came King Kong, throwing his weight around, and the PB-3000 sounded utterly huge. The ape’s fists 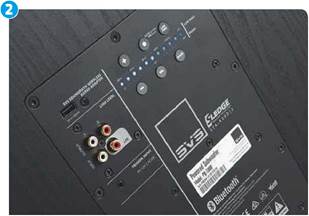 pounded the race track and his growls flattened my face, and I whooped in delight.

Perhaps the best way to describe the difference this ported subwoofer brings over the SB-3000 is that it adds an extra layer to the low-end, a bonus slice of bass that’s always tangible, if not always the most obvious element of the mix. And it’s a trait that’s replicated across a wide range of material.

In Blade Runner 2049 (4K Blu-ray), Hans Zimmer’s score menaced and throbbed, and it felt as if low frequencies were pervading every part of the room. With Baby Driver (4K Blu-ray), the PB-3000 had less to do, but I could still sense its presence in almost every scene.

Keen again to test its stopping power, I switched to music and the 3D – The Catalogue Blu-ray by Kraftwerk (and its delightful Atmos mixes). The repetitive half-beat kick drums during Trans Europe Express were a bit overbearing, a touch flabby when you’d expect them to be skin tight (even with the sub’s Music Preset in play). Here the app came in handy, as a quick level adjustment resulted in a better balance between sub and speakers.

It also sounded more in control with the tighter rhythms of Kraftwerk’s Techno Pop.

Perhaps you wouldn’t invest in the PB-3000 if your playlist involves a lot of music material. First and foremost, this is a bassmaker for movies, designed to really do justice to sub-30Hz LFE effects. It’s about delivering a performance that majors on size, depth and purity of output.

The PB-3000 does this with consummate ease, and the difference it brings to movie mixes, compared to the SB-3000, is more apparent than the £ price gap between them. It’s worrying large, and the styling is far from catwalk, but buyers are unlikely to care

Some might prefer the tighter edge of a sealed sub, but this largescale home cinema-centric woofer counters with a step-up in scale and weight. Big and bold.

READY PLAYER ONE: Steven Spielberg has an absolute blast with this fantastical sci-fi/virtual reality yarn, while the Dolby Atmos mix throws up demo-grade moments and the 4K HDR visuals offer copious eye-candy.