The brand’s debut 8K display – the Master Series ZG9 – is the best reason yet to make an early jump into 4,320p, says Steve May 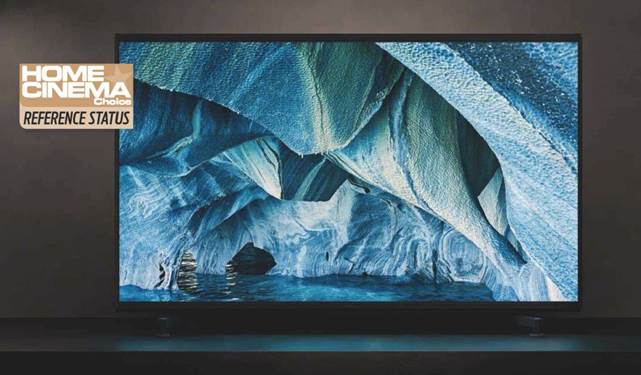 Premium Master Series TV, with a 98in model also available

SONY HAS BECOME the second TV major to debut an 8K screen, with Its Master Series ZG9. This 8K debutante comes in suitably monster 98in and 85in screen sizes. With the former retailing for £, the average ZG9 is clearly not going to appeal to the man in the street, unless of course that man happens to live on Rodeo Drive. We opted to audition the budget option.

Given there’s not a lot of choice in the 8K flatscreen market, the ZG9 squares up directly against Samsung’s Q950R series, and proves a formidable competitor.

There are two heavy-duty stand options, both substantial in order to cope with the set’s 71.7kg bulk.

The TV has four HDMI inputs, but only one (HDMI 4)

The screen comes with the latest Oreo Android TV OS, and offers all the front-line streaming apps, including YouTube, Netflix and Amazon Prime Video. Google Assistant is also built-in, with a red LED light to the right of the Sony logo to Indicate that Google Is awaiting your command. There’s also support for Apple Airplay 2 and HomeKit smart home applications.

One refinement to the Sony Ul this year Is a quick settings bar that pops up from the bottom of the screen. This can be edited to reflect what shortcuts you wish to see, from sound/picture settings to network status. Useful.

If I were to suggest Image quality on this premium flatscreen was anything less than astonishing you’d probably be disappointed. But I’m not, so you won’t.

The ZG9 provides a mesmerising viewing experience, with images that are blisteringly sharp and vibrant.

Much of the credit can be attributed to the latest edition of Sony’s X1 Ultimate image processing engine, first introduced on the brand’s 4K models. Here, everything appears to have had a tune-up. Object-based super resolution, HDR remastering, dual-database processing and Dynamic Contrast Enhancer have been given a wider expressionistic canvas.

Re-rendered 8K footage (provided by Sony) from Gran Turismo looked sensational, while travel footage captured around Vienna exhibited almost three-dimensional depth. An 8K sequence shot at the Rio Carnival wowed with a glorious parade of yellow and glittering gold. This doesn’t look like any TV picture you’ll have seen before. The minuscule detail in the image is seductive; you’ll want to sit closer to view clearer.

All of which begs the thorny question: how far should you sit from an 85in 8K screen? To really appreciate its clarity, 1.5-2x screen height is a good metric. But even on this Jumbotron, many will argue that you’re simply sitting too close. Park your sofa three metres away and you’re certainly not able to appreciate the really subtle detail.

But perhaps that doesn’t matter? What you have here is a panel that’s astonishingly immersive.

Sony describes the Image density offered by 8K as ‘realness’, and there’s some accuracy to that. The sense of texture created by the increased PPI (pixels per inch) makes for a rather different experience than 4K models.

With high-quality sources, the Vivid preset, with its oversaturated primary colours and high brightness, is a real eye-catcher. Most, of course, will opt for the Standard and Cinema options, which dial this vibrancy back – but not to a point that translates to a significant lack of pop. The Custom mode is actually Sony’s old Cinema mode, which is considerably less impactful.

Not that this screen needs to aggressively tone map.

It’s one of the brightest, most dynamic LED LCD TVs I’ve ever encountered. I measured peak brightness upwards of 3,000 nits, using a 10 per cent HDR window on the Standard Image preset. The result Is superb specular highlight detail.

Peaks are (very) bright, and the LED modules on the Backlight Master Drive are Independently controlled to give maximum contrast. According to Sony’s engineers, the 8K X-tended Dynamic Range PRO processing allied to the TV’s multizone FALD backlight uses saved energy to intelligently boost the brightness in the areas where needed (which sounds a bit like the Kinetic Energy Recovery System used in F1 cars. Okay, this analogy may be off the pace but the end result certainly puts Sony in HDR pole position). Black level performance Is class-leading.

4K content Is expertly, naturalistically upscaled. There’s no sense of over-processing or artifice. 8K upscaling is not really about making 4K look better, it’s more about not making It look worse. And this set gets the balance right.

Actually, where the ZG9’s image chops really impress is taking an HD picture and remapping it to 8K. With original 1080p content there really does seem to be more nuance and depth in the image.

Motion handling remains a strong suit of Sony. On the ZG9, Motionflow settings are limited to Auto and Custom, which offers adjustable smoothness and clearness. I’d 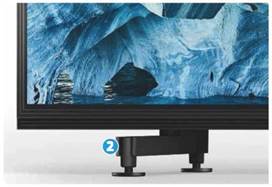 normally advise turning Motionflow off for movies, but If you do, judder becomes quite apparent on a screen this large. The Custom setting is a good compromise, with Smoothness on ‘2’ and Clearness at T. Interpolation effects aren’t too intrusive.

As for that Acoustic Multi-Audio sound system, it’s impressive. The forward-facing speakers are difficult to spot, and the rear-mounted woofers similarly discreet, but the soundstage is wide, large and in your face. There’s a decent mid-range and a fair amount of slam, great for space battles and action scenes. And, yes, the set does offer Dolby Atmos decoding and passthrough.

While there’s no compelling reason to upgrade to 8K Just yet, the ZG9 could be an arm-twister for the well-heeled. Image clarity and fine detail is stunning, and Sony’s multi-driver speaker assemblage Is effective. In short, It’s the best super-large LED TV I’ve experienced. There’s probably already a waiting list in Beverly Hills

This uncompromising 8K giant offers best-in-class HDR, with superb fine detail and colour vibrancy, coupled to a dynamic sound system. You don't need one, but you'll want it.

Park yourself in front of Sony’s monster display on a luxurious home cinema seat. The electric recline, Italian leather Paramount range begins with single chairs for £, and steps up to five-/six-seater designs.