Guy Ritchie lets the genie out in Aladdin on 4K Blu. Rather than going back to the drawing board, Sony has given its OLED flagship a tweak. Steve May reports. Read our Sony KD-65AG9 Review. 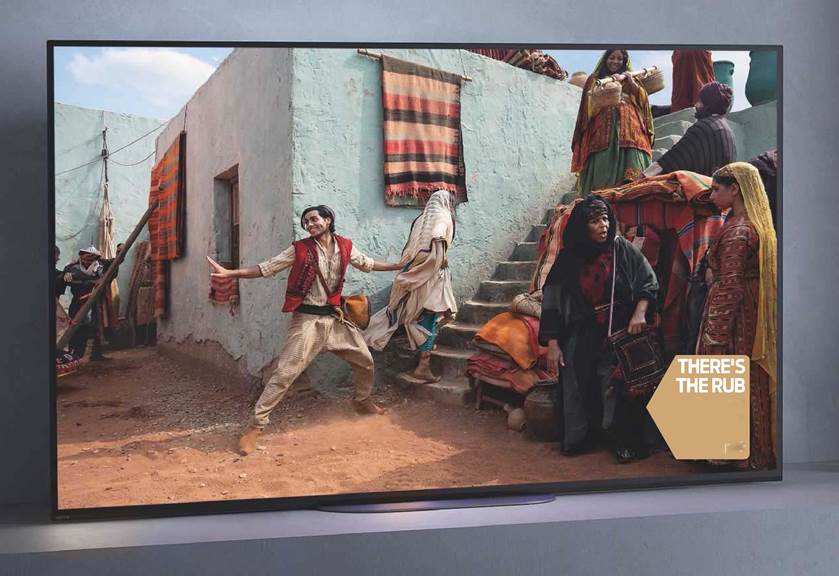 They say the more things change, the more things stay the same. It’s a saying that fits with the Sony AG9. The high-end TV technology scene has rarely been more turbulent, but you’d never guess that from this OLED. Sony’s Master Series range-topper, available in 55in, 65in and (a new) 77in screen size, opts for quiet refinement over last season’s predecessor. Well, if it ain’t broke…

This update (arguably not an upgrade) on the highly regarded AF9 steps away from some of the more outlandish differentiation seen on previous Sony OLED displays and offers a level of wide-ranging functionality that should appeal to both luxe lovers and hardcore cinephiles alike.

Cosmetics are class-leading. The screen adopts a Zen approach to design, opting for simplicity and elegance over obvious accoutrements. The frame is wafer-thin; the panel sits virtually flush to the central stand. What you see is basically all glass, save for some admirably discreet branding. The TV actually boasts a slimmer footprint than its forebear, although you’d be hard pressed to see where savings have been made. A premium RF remote, complete with aluminium face and integrated microphone, rounds out the package.

The AG9’s four HDMI inputs are v2.0. Gamer-friendly features such as ALLM and VRR aren’t supported, but eARC is provided on HDMI 1. Other connections are a trio of USB ports (one for HDD recording), plus a headphone socket, optical digital audio output and Ethernet. Wi-Fi and Bluetooth v4.2 (the latter able to link to Bluetooth headphones for private listening) cater to streamers.

The TV has a choice of terrestrial or satellite tuners, but no Freeview Play (instead Sony offers a YouView app).

Feature attractions include IMAX Enhanced certification and a Netflix Calibrated Mode. The former is probably of more interest to film fans, and lets the AG9 tick a box that other-brand TVs don’t. Compatible content remains in painfully short supply, however.

There’s no change to the smart platform. Once again we get the Android TV OS, which, thanks to Chromecast Built-in and the growing popularity of Google Assistant, now offers some useful multiroom and smart home functionality. The AG9 also works with Amazon Alexa voice control devices, and there’s support due for Apple HomeKit and AirPlay 2. The latter will allow iOS users to stream content from an Apple gizmo, or sync up with compatible speakers. You can buy electronics and home essentials online; if you want coupons and more information check it out on this site.

Given Sony’s recent track record, it’s almost a given that the AG9’s 4K HDR performance will impress straight from the box, but this screen also knows how to make the most of HD. The brand’s X1 Ultimate image processor maximises the attributes of the panel for 1080p SDR material, without images feeling overly bright or artificially enhanced.

You can get an idea of the talents of Sony’s processing by selecting the TV’s Vivid mode. This is particularly entertaining with anime, although you’d steer clear of using it for movies and sports.

The screen’s HDR performance is admirable, with some qualification.

I recorded peak HDR brightness at around 750 nits, in Standard viewing mode, using a 10 per cent measurement window. Yet small

2. The AG9 packs Sony’s most potent processor – the X1 Ultimate 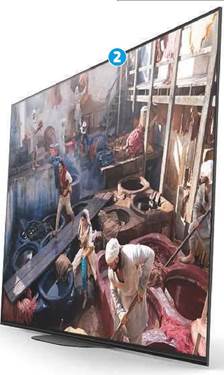 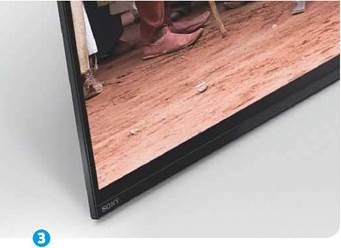 If you want to view movies and better reflect what’s seen in a Hollywood grading suite, Sony provides a very authentic-looking Custom mode, tuned to match its own mastering monitor. This is really only suitable for dark-room sessions, and HDR peaks don’t get past 650 nits.

There’s a further raft of user controls to tweak if you feel the need, although often the defaults (unsurprisingly) look the best: I preferred Peak Luminance set to High for HDR, and Medium for SDR, while Advanced Contrast Enhancer and Black Adjust are ideal on Medium.

Another tool is Sony’s Reality Creation image enhancement, which brings out subtle details that might otherwise get lost. A run-though of Spider-Man Homecoming (Netflix HD) demonstrates the benefits.

Switched on, the panel clearly delineates more detail in the Vulture’s flying suit. Take a closer look at his wings, with and without the RC treatment; it’s a wonder Toomes can fly with image enhancement switched off.

The panel’s talent for near black presentation is quickly appreciated in the other-worldly environments of The Expanse (Amazon Prime, 4K), which are deep, rich and dimensional. Colour fidelity is also consistently joyous.

The Calibrated for Netflix mode is a doppelganger for the Cinema preset by any other name, and has the benefit of not arbitrarily darkening everything; the exteriors in Dark Crystal: Age of Resistance remain undimmed. I found I left it on more than I turned it off.

When it comes to motion handling, the AG9 continues Sony’s good run of form. Available in Auto and Custom modes, Motionflow XR processing adds smoothness and clarity to fast action. It isn’t always effective with movies, though: Kylo Ren literally goes to pieces in Star Wars: The Last Jedi when he smashes his helmet against a panel (4K Blu-ray, Chapter 8). The picture appears a lot cleaner with frame interpolation off.

Reflecting its Master Series status, this OLED employs a new iteration of the brand’s Acoustic Surface Audio+ system, a sonic innovation that uses acoustic agitators on the panel itself, rather than conventional speakers, to produce surprisingly fulsome tones.

An adjustment this season sees Sony downgrading from three acoustic transducers to just two. Engineers have attempted to compensate by redesigning the enclosures to cast a wider spread of bass and treble.

To put the new sound system through its paces, I settled back with Baby Driver (Blu-ray). The simplified soundstage certainly has fluid movement and clarity, and the TV’s pair of rear-mounted woofers add welcome weight.

The opening heist sequence encourages you to edge up the volume, without any nasty crackles. But while the changing speaker specification isn’t a disaster, it’s certainly not an improvement.

Rather cleverly, the Acoustic Surface system can be designated as a centre channel in a multichannel surround array, which could theoretically save on space and costs when putting together a system. A pair of stereo spring-clip terminals await on the back to serve.

The AG9 is Dolby Atmos compliant, but you’ll need to pass Atmos out to a separate compatible audio system to make anything memorable from it.

It’s fair to say Sony is treading water with the AG9, but while fresh innovation is thin on the ground, and HDR10+ support is still AWOL, absolute quality remains undimmed. Superb image performance, coupled to still startling Acoustic Surface Audio+ technology and a beautiful minimalist design, make this a dream screen well worth swiping right for

Sony gives its top-of-the line OLED a tickle, and while audio gets a minor make-down, image quality remains excellent. Don’t expect the clamour for HDR10+ to go away, though.

SPECTRAL NEXT: A glam AV cabinet for Sony’s glam TV, Spectral’s Next range offers customisation options including integrated lighting, soundbar mounts and fabric fronts. Base pricing begins around £ for the 180cm Lowboard model.