It may lack upfiring drivers, but this affordable Dolby Atmos system compensates with unbridled chutzpah, says Steve May. Read our SONY HT-X8500 Review.

The soundbar is designed to partner screens up to 55in

THE SONY HT-X8500 is proof that you don’t need to spend big for a truly entertaining Dolby Atmos-enabled soundbar. Modestly priced (given that you can easily spend twice as much for a rival system), it’s surprisingly compact and compatible with both Dolby Atmos and DTS:X.

But there are caveats. This isn’t a smart bar and if you want to cast Chrome, you’ll need to look elsewhere. Wireless connectivity is limited to Bluetooth.

And despite the Atmos appellation, it adopts a 2.1 channel design. There are no Dolby-enabled upfiring drivers; it doesn’t even come with a separate wireless subwoofer, preferring to harrumph bass through two forward-facing woofers.

But the experience it offers is greater than the sum of its parts. The key is technology first heard on Sony’s HT-ZF9 predecessor [reviewed HCC #289], specifically Sony’s Vertical Sound Engine, which creates the illusion of audio immersion.

Physically, the HT-X8500 is a middleweight. Just 89cm wide, it’s most obviously suitable for sets measuring between 49in and 55in, and slim enough to sit comfortably in front of most of them. Naturally, it can also be wall-mounted.

Visible through the grille are twin front-firing woofers

either side of a dual driver subwoofer) can just be seen behind a rolled grille, while grey trim adds a designer flourish. Touch-sensitive buttons are provided for power, input selection, volume control and Bluetooth pairing.

Connections are a digital optical audio input, and twin HDMI – one an output with eARC – compatible with Dolby Vision, HDR10 and HLG. Some might want more HDMI inputs, but if you connect the majority of your sources direct to your TV, and listen via the Audio Return Channel, the specification here isn’t too difficult to live with.

Reflecting its upper-budget price point, the HT-X8500 has no onscreen menus. Instead, a line of LED lights on the soundbar indicate source and audio format, be it Atmos or DTS:X.

Straight from the box, it’s all plug and play. The HT-X8500 isn’t fussy when it comes to placement and can be parked in AV shelving, as it doesn’t rely on reflected sound.

The fun starts as soon as you power up. This soundbar goes loud and plays wide, Sony’s digital processing proving 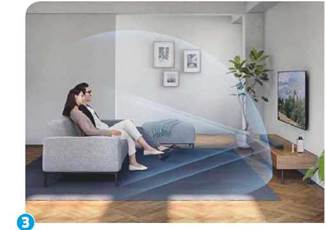 immediately effective. In many ways, it’s a good deal easier to live with than the HT-ZF9, which was inscrutable at best. Here things are a lot more clear cut.

Beneath the hood you’ll find S-Force Pro front surround audio processing, coupled to the brand’s Vertical Sound Engine. While the latter isn’t able to simulate overhead effects (very few soundbars can, regardless of budget), what it does do is paint a soundstage that towers in a way regular stereo systems can’t, and wraps audio around your seating position, almost like the sonic equivalent of Cinerama.

Sony suggests the HT-X8500 creates a soundfield comparable to an Atmos 7.1.2 system. That’s a bit wishful, but for £ let’s not be overly pedantic. Dolby Atmos and DTS:X movies exhibit a clear sense of expanded

‘When it comes to bang for buck, this is hard to beat – cinematic sound without a blockbuster price tag’

height and width. The bar’s Vertical Sound trickery doesn’t just work with object-based codecs, it can be used as an upmixer for conventional 5.1 and two-channel sound sources too.

It’s a gutsy performer, and doesn’t run out of steam in the average living room. Given the physical confines of the cabinet, I expected some shortfall in slam, but again this mid-ranger belies expectation, with its forward-facing woofers shifting air.

Bass response was measured down to 50Hz. While this isn’t enough to rearrange your spleen, it’s enough for a pleasing rumble. Sometimes its boom gets a little heavy handed, and there’s not much scope for adjustment, but for movies it’s on the right side of boisterous.

One upshot of Vertical Sound processing is that there’s a definite sweetspot. Sonic imaging is more precise when you sit square-on. Sit offside and you’ll not pick up some of the steerage.

The DSP is also something of a leveller, in so much as there’s not a great deal of difference between Atmos and Dolby TrueHD soundtracks. Both get the uncanny wraparound treatment.

When Matthew McConaughey and his team splash-land on the water planet in Interstellar, after traversing the Black Hole, it’s a wonderfully engulfing experience. The HT-X8500’s soundstage, as they air-break through the atmosphere, is coherently chaotic. The rattles in the cabin, and alarms mixing with the thunder of re-entry, conspire to make a truly cinematic cacophony.

This ability to handle difficult mixes is similarly showcased in X-Men: Days of Future Past (Blu-ray, DTS-HD 7.1). When the Sentinels attack our future mutants, the sound design is complex to say the least. An insistent adrenalised score, copious special effects, the sound of concrete splintering and sudden attacks; are all kept reasonably intelligible.

Differences between the soundbar’s preset modes aren’t vast, but I did feel Music and Cinema created the right impression. The Game preset has been fine-tuned with help from PlayStation developers, so by all means select this when you break out the joypad.

It’s a decent performer with music, as long as you’re not expecting a hi-res audio experience. Listening to Amazon Music HD via a Fire TV cube is thoroughly entertaining. Streaming over Bluetooth is equally satisfactory.

When it comes to sheer bang for buck, the HT-X8500 is hard to beat. It’s an Atmos bar that relies on DSP rather than physical drivers to create an immersive soundstage, yet sounds remarkably convincing.

It’s nearest competitor is probably the Panasonic SC-HTB900, also compatible with Dolby Atmos and DTS:X, but also without upfiring drivers. The Panasonic ships with a separate sub, reflected in its higher ticket price.

If you want cinematic sound without a blockbuster price tag, consider this a solidly entertaining upgrade for any 4K thin-screen

This affordable all-in-one delivers fun cinematic sound without upfiring speakers or install complication. It's a rewarding upgrade for mid-range thin-screens.