When it comes to OLED TVs, you probably think of LG – basically the only company in the world that produces enough panels at scale to supply the entire industry. But the TV manufacturers buying those panels (namely Sony and Panasonic) are taking the technology and making it their own with custom processors, in-house designed bezels and stands, as well as installing their own smart TV platforms – or in Sony’s case, a licensed partner’s. 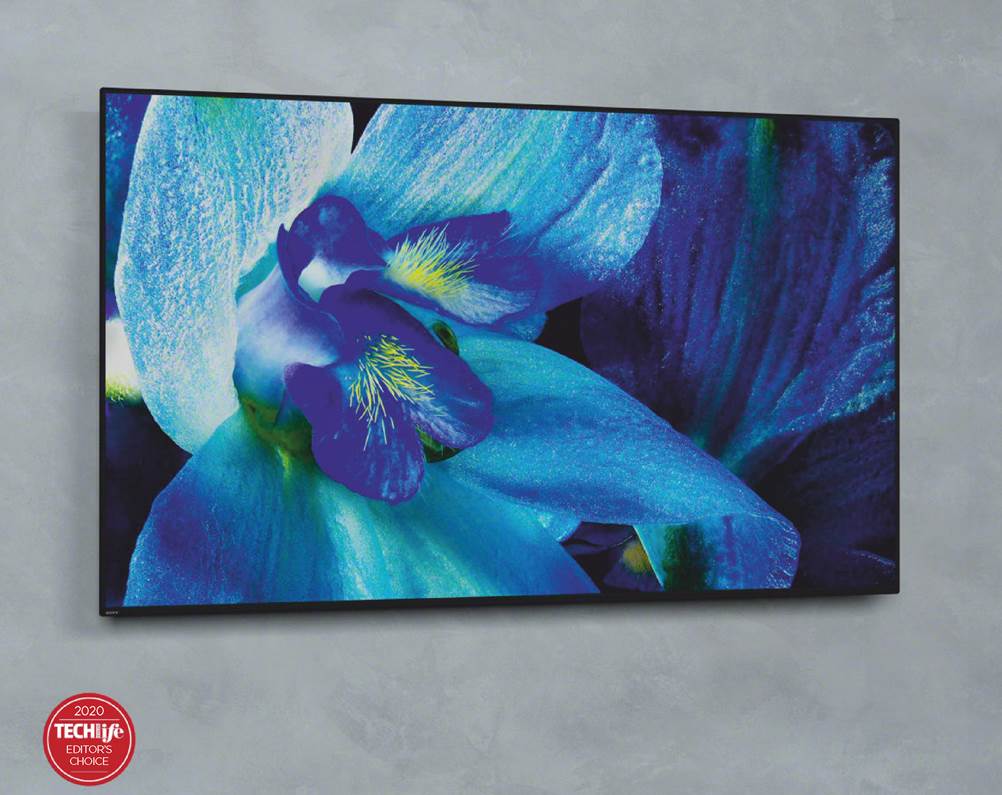 The result is a TV that’s different in both form, function and price from the TVs that LG produces, and are therefore worth looking at in more detail.

That leads us to the Sony A8G OLED that takes an LG OLED panel and infuses it with Sony’s X1Extreme Processor and Android TV Oreo with Google Assistant built into the TV itself.

Sure, it’s slightly more expensive than the lower-cost LG B9 OLED and LG C9 OLED, but if you want the best upscaling, motion processing and picture

There’s a physical power button and volume rocker located next to the ports on the back.

customisation options, look no further than the Sony A8G OLED.

Although it shares the same birthplace as the panels found in LG’s B9 and C9 OLED TVs, Sony chose to encase that panel in a minimalist frame with a crescent­shaped stand. That gives it a slightly different look than the LG B9 OLED that uses a pedestal to hold the TV upright.

The stand is reversible if you want a slightly different look and, in terms of cable management, you can string cords through the back of the legs of the TV, which should help to keep your entertainment center looking tidy.

While the bezel on the front is fairly minimal, the TV is a tad chunky in the back-midsection. That’s where the internals of the TV are hosted, and that’s where you’ll find the IO ports, which are rather generous in quantity: On both the 55-inch and 65-inch versions of this TV you’ll find four HDMI ports with HDCP 2.3 and one with ARC, plus a digital audio out, 3.5mm auxiliary and three USB ports.

For the real TV enthusiasts out there, the Sony A8G doesn’t support eARC, nor does it have any HDMI 2.1 ports – but that’s something that could be changed on the upcoming Sony A8H that’s due out later this year.

Like the A9G OLED, the step-down A8G uses Android Oreo – the latest version of Android TV that supports built-in Google Assistant and a familiar row-based design that helps separate Android TV from smart TV platforms like Tizen and webOS.

Other TVs might have ruined Android TV for you – as some TV’s processors just aren’t capable of keeping up with the platform’s resource-intensive visuals – but on the A8G everything is snappy and responsive, with a relatively deep catalog of apps that can be found along the bottom-most row.

Each row is a visual representation of content inside an app. For example, the YouTube row will have recommended YouTube videos for you based on what you’ve watched previously. The same is true for the Netflix, Google Play Movies & TV and Play Music rows, too.

This design makes finding new content relatively easy, but it can bury the library of apps which now requires a bit of scrolling to get to. Among the supported apps you’ll find Disney Plus, YouTube TV, Amazon Prime Video, Vudu, Crunchyroll, CBS All-Access, ESPN, Starz, HBO Now and many, many more.

HD/SDR Performance Any old 4K TV can take Ultra-HD content and make it look great, but the Sony A8G is among a select few that can take any content, regardless of age and quality, and make it shine. That’s due primarily to the X1 Extreme Processor which uses a multi-faceted upscaling process to reduce grain, sharpen edges and enhance colors. This is something all 4K TVs do to some extent, but almost none of them do it as well as Sony does.

To test the A8G’s mettle, we threw on The Lord of the Rings: The Fellowship of the Ring on DVD – a classic that’s well-worth re-watching every few years. The result? The Shire, which has always looked picturesque thanks to its New Zealand backdrop, looked especially verdant on the A8G, with beautiful greens and bright blue skies, and the forest of Lothlorien and the Mines of Moria had an almost ethereal look to them – which we loved.

4K/HDR Performance While OLED TVs have been panned in the past for their lower-than- LCD levels of brightness, the A8G will surprise you with 800 nits of 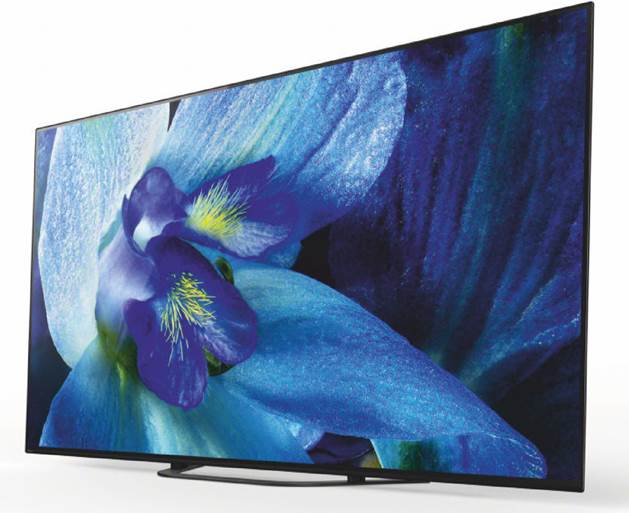 The A8G’s stand can be reversed if you want to give your TV a different look.

peak brightness. That’s still less than, say, a Samsung Q90 QLED or Vizio P-Series Quantum X, both of which easily top 2,000 nits – but it’s a big improvement on previous generations.

That perceived uptick in brightness means that the A8G looks great in both dark settings and light-splashed living rooms, and helps HDR content look more colorful and impactful.

That said, Sony is fairly conservative when it comes to its color grading and tends to be less vibrant than other manufacturers. Image presets comprise Vivid, Standard, Cinema, Game, Custom, Graphics and Photo, with Standard being fairly versatile and applicable in most circumstances.

The Sony A8G OLED is a fantastic 4K HDR TV with amazing picture performance, incredible upscaling and the best-in-class motion processing. We have some reservations about Sony’s Acoustic Audio Surface tech and the plastic remote that uses an IR blaster to control the TV, but it performs in the only category that matters: picture quality.

£429.00
Added to wishlistRemoved from wishlist 0