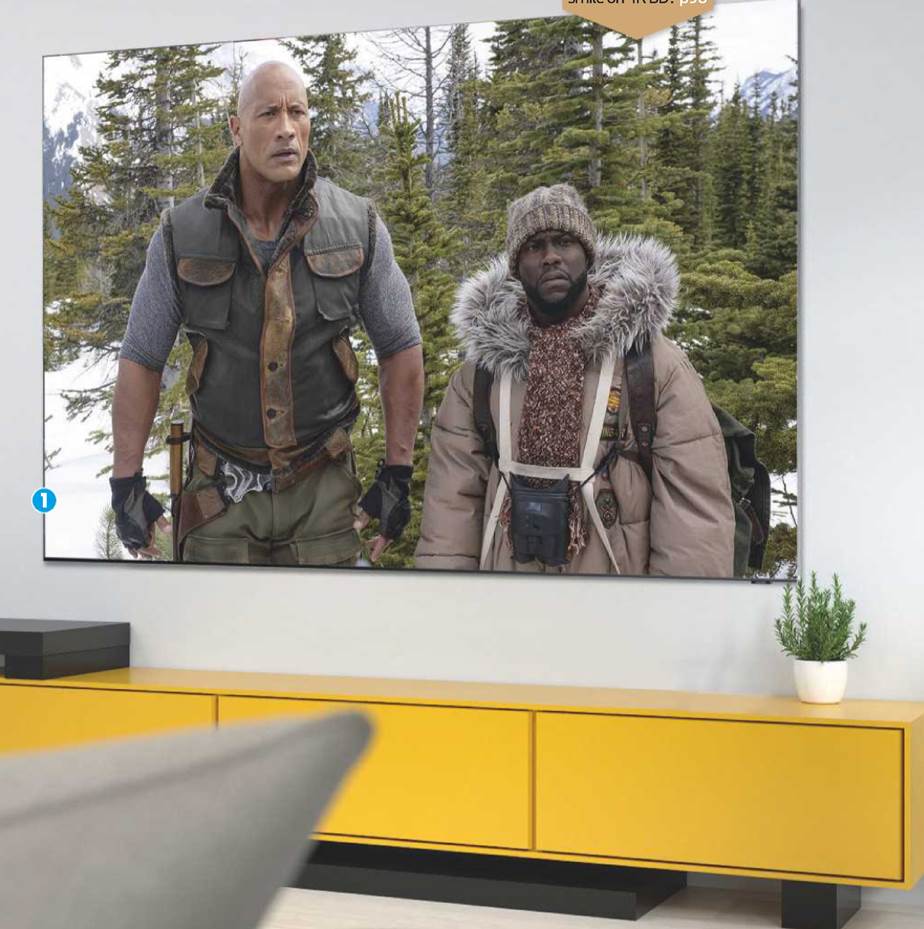 8K TV given a picture polish

While some companies still sit on the 8K TV sidelines, Samsung has already reached its third generation of 7,680 x 4,320 flatscreen. As expected, this year’s offerings promise to be better than ever, both in terms of AV prowess and aesthetics – and more affordable to boot. If you’ve always viewed the question of upgrading to 8K as ‘when’ not ‘if’, perhaps the answer is ‘now’.

One detail that might sway you (or might not) is the seal of approval from industry body the Consumer Technology Association (CTA). Samsung’s top-of-the- range 2019 8K sets hit a stumbling block when the CTA announced its 8K certification programme in September – and the Korean brand’s screens didn’t pass mustard when it came to a criteria known as contrast modulation (CM), which tests a display’s ability to distinguish a pattern of alternating, one-pixel-wide, white and black lines. Samsung’s employment of a new wide viewing angle technology caused them to fall short of the desired CM measurement. Not surprisingly, the company has put this right, and the QE75Q950TS auditioned here passes all current 8K TV ‘definitions’. As a result, its viewing angles aren’t quite as high as those of last year’s 8K sets; pictures lose a little contrast now from angles of around 35 degrees off axis. In every other way, though, it improves on its predecessors.

So what experience does a 75in 8K TV deliver? Predictably, its pictures are gloriously detailed and sharp. This is, of course, especially true if you feed it native 8K material. For the purposes of this review, such content was predominantly a high dynamic range (HDR) showreel of nature scenes created by Spears & Munsil. Every single frame of this looked more textured, more immediate and simply more real than it did on last year’s Q950R model.

There’s still scepticism about 8K’s benefits. But to my eyes the advantages are clear, at least on 75in screens and above. Even from typical viewing distances there’s a cleaner, more detailed look to images.

With native 8K content practically nonexistent at the time of writing, though, the most important improvement the QE75Q950TS delivers is its improved upscaling. Viewing the 4K Blu-ray of the beautiful Blade Runner 2049 transfer on Samsung’s new model, head-to-head with last year’s 75Q950R is like watching the film in two completely different resolutions. The amount of extra sharpness, texture, skin detail and subtle shading delivered on the Q950TS is incredibly obvious.

Some of this picture performance boost is due to a revamped panel design. Getting up close to the screen, and using highly detailed shots, reveals that where edges and small details are ‘blurred’ on last year’s set by a noticeable horizontal line structure, a more straightforward square pixel structure this year results in edges and details looking much finer and more defined.

Also, Samsung’s upscaling process has been improved by the addition of a neural network capable of deep learning. This means, in plain English, that the latest upscaling system can self-learn how best to respond to different incoming sources, rather than just drawing on a big database of before and after content.

Samsung admits the brain power needed to deliver this feat means the processor has to limit itself to addressing only the most detailed areas of pictures; it can’t be applied equally to the whole image. But this doesn’t result in just some parts looking sharp and everything else appearing soft; it just means that the relative softness or noisiness of extremely detailed areas that I’ve often seen with 8K upscaling engines is no longer an issue. The results are remarkable to behold. Even HD pictures are stable enough to be enjoyable.

1. Samsung dubs the Q950TS an ‘Infinity Screen’, thanks to its ultra-thin bezel

This year Samsung has added a further layer of power management to its Full Array with Local Dimming (FALD) LED lighting system, re-routing energy from dark parts of the picture to brighter ones. In play, this brings a brilliant sense of contrast, and reduces the backlight clouding and uniformity issues usually associated with high-contrast LCD panels. Where a bright white object appears against a nearly black background, such as streetlights against the night sky outside the orphanage at the start of Pan (4K Blu-ray), the blackness around the object shows scarcely a hint of blooming. For the vast majority of the time, I didn’t notice any such artefact at all, provided the viewing angle was kept shallow.

Just as importantly, the QE75Q950TS doesn’t have to curtail the impact of bright objects to maintain its black level uniformity. There’s none of the vanishing text and dull moons that were, for me, the main niggle with Samsung’s 2019 TVs (which were still, let’s not forget, excellent).

Put all this together and you’ve got a backlight system that approaches the black level and local contrast picture strengths typically associated with OLED technology – but also maintains the brightness advantage that’s associated with LCD TVs.

On the QE75Q950TS, this brightness measures from 3,100 nits in Dynamic mode (using a white HDR window covering 10 per cent of the screen), to 1,600 nits in Movie mode and 1,700 nits in Standard mode. Only the Dynamic preset, therefore, gets anywhere near the 4,000 nits Samsung claims for this TV, and that preset is really too aggressive to recommend. But 1,700/1,600 nits is still fearsomely bright for a TV, easily outgunning OLED competitors.

Nearly all HDR sources are accompanied by wide colour gamuts. Here the QE75Q950TS is in its element, as its 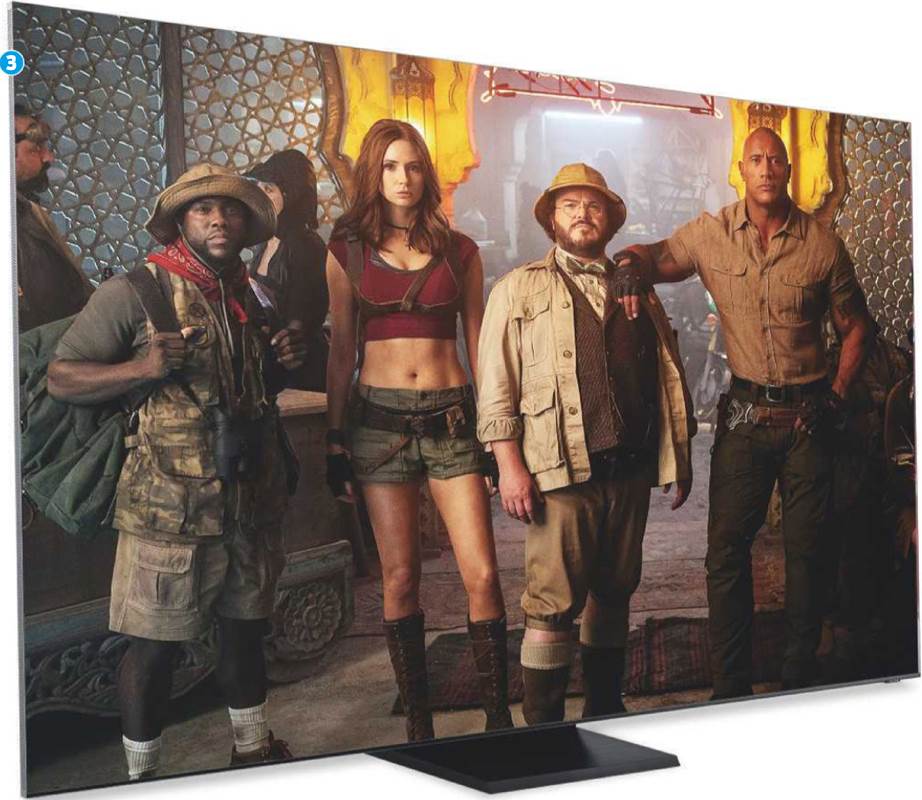 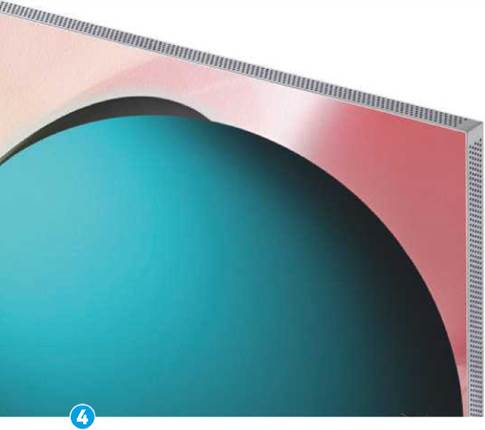 If you’re a gamer, meanwhile, the QE75Q950TS delivers all kinds of good news, beginning with an industry-leading input lag measurement of just 10ms. There’s also a welcome option to retain a little motion smoothing processing when gaming that only increases input lag to 27ms, and the TV supports Automatic Low Latency Mode (ALLM) switching and Freesync Variable Refresh Rate technology. The inclusion of a high-bandwidth HDMI 2.1 port among its connections should open support for 4K/120fps and 8K/60fps gaming (albeit with restricted chroma subsampling), if titles on the next generation of consoles reach such graphical levels.

There is a trio of relatively small issues with this TV’s pictures. As mentioned earlier, viewing angles aren’t as extreme as they were on previous Samsung 8K sets. There’s also no Dolby Vision HDR support, just HDR10+, HLG and HDR10.

Finally, my test sample occasionally flickered during very dark shots when using the Movie preset, as if the backlight was struggling to figure out where to settle with certain black level tones. Samsung tells me, though, that it anticipates being able to fix this latter issue with a firmware update soon.

Samsung hasn’t just funnelled its R&D cash into the QE75Q950TS’s pictures. This screen’s design and sound are both unlike anything we’ve seen or heard before from the brand.

The so-called Infinity design sees the screen surrounded by practically no bezel at all (a mere 2mm), so its pictures seem to emerge magically from nowhere when viewed from a typical viewing distance. Maintaining the uncluttered look is an external connections box that links to the TV via a single, discreet cable.

The massive black hole left behind when you turn the TV into standby isn’t so subtle, of course. But Samsung tries to cover that, too, with its Ambient Mode technology. This lets you play your choice of digital photograph, artwork or screensaver video when you’re not watching the set, while the TV switches to a low power mode.

Tucked into all four of the TV’s grilled-bezel sides are speakers. The idea here is that placing speakers all around the screen allows the TV to image audio in the correct place with uncanny, unprecedented accuracy. If an object circles around in the picture, for example, you can hear its sound circling with it. The Object Tracking Sound + (OTS) processing that achieves this can cover a surprising number of different objects in a frame at once, and can even track objects as they move off screen, so that the sound extends beyond the edges of the frame. It’s seriously clever stuff for a flatscreen TV that makes soundtracks feel immersive and packed with detail.

Actually, the whole soundstage projects effectively beyond the screen’s physical boundaries, without losing coherency. There’s even a height dimension to the audio dispersion, making me wish Samsung had pursued built- in Dolby Atmos decoding for its flagship set. The sound still works well without it, though – as long as, that is, you turn on the available Amplify or Intelligent sound options. In its default mode, the QE75Q950TS’s audio strangely lacks directness, dynamics and scale.

Pile Samsung’s content-rich, customisable and easy-to-use smart system (which includes the latest Apple TV and Disney+ apps) on top of all the QE75Q950TS’s groundbreaking features, and you’ve got a TV that’s the definition of a flagship set, and arguably the most all-round complete TV package I’ve seen. Naturally, many will consider the concept of an 8K TV an irrelevance while content remains elusive, and its £ price dwarfs that of similar-sized 4K sets. But in this nascent market – and with LG’s 8K OLED TVs considerably more expensive – the QE75Q950TS is in a class of its own

4. Perforations in the TV’s bezel hint at its four-sided speaker design

SAMSUNG Q800T: For a soundbar partner, consider waiting for this 2020 model to finally launch. This will intro Samsung’s Q-Symphony feature, utilising drivers both in the ‘bar and Tv for a vertically immersive presentation. Price is TBC.