When Samsung introduced its first QLED TVs in 2017, their focus was mainly on two things: brightness and colour range.

Two things which, funnily enough, rival OLED TV technology traditionally struggles with. But Samsung has moved on, and its 2019 QLED, tested here in the shape of the top-of-the-range QE65Q90R, is an LCD TV which behaves in many ways like an OLED TV – without sacrificing LCD’s own strengths…

It doesn’t look like an OLED, though. Samsung’s direct LED lighting system makes this set much deeper around the back than typical, ultra-thin OLED TVs. That’s not to say that the QE65Q90R doesn’t have its own aesthetic charm. Its bezel is slim, it uses an external connections box that provides picture, sound and power to the screen by a single thin cable, and it boasts the Ambient Mode low-power ‘screen saver’ that lets you play anything from digital photos to famous artworks, funky lighting effects and cool optical illusion animations when you’re not watching the TV. You can even display a photograph of your wall’s paint or wallpaper on the screen for the ultimate blending-in effect.

Samsung has also tweaked the stand design from the one used with its 2018 Q9FN range, switching to an attractive metal sheet approach that lifts the TV slightly higher to make it easier to accommodate a soundbar underneath.

It’s with its imaging features, however, that the QE65Q90R really makes its mark.

Particularly eye-catching is its new wide viewing angle technology. This allows you to watch this LCD TV from almost any angle without contrast or colour saturations wiping out. It does this by adding two layers to the LCD screen: one near the backlight that greatly reduces the loss of light focus and intensity that usually occurs at this stage, and one near the front that scatters the light emerging from the screen more equally in all directions.

Sony also achieved a measure of viewing angle success with its ZF9 LCD models. However, those sets had to sacrifice significant amounts of contrast to deliver their wide angle support.

Two other features of Samsung’s 4K flagship are specifically focused on delivering a boost to black levels and retaining contrast. First, there’s a new processing chip exclusively devoted to controlling the TV’s 480-zone local dimming system. Second, the screen employs a new black filter that does a remarkable job of soaking up ambient light.

The main image processor is also more powerful than the one used by last year’s Q9FN models, drawing on the ‘AI’ system Samsung developed for its 8K Q900R TVs.

This should mean, in particular, improved upscaling of sub-4K sources to the TV’s native 4K screen.

Some may be surprised/disappointed that the QE65Q90R doesn’t provide any full-bandwidth HDMI 2.1 ports. Yet this shouldn’t pose a problem for the vast majority of users, as the TV still provides a couple of HDMI 2.1-related gaming features: Variable Refresh Rate support, and automatic game mode switching. The latter kicks the TV into its low-latency mode when game sources are detected, reducing the time the screen takes to render images to a measured 15.4ms.

There’s another fresh game-related feature, dubbed Dynamic Black Equalizer. This lets you raise the light level of dark parts of the picture without disrupting the brightness or contrast elsewhere, so that you can, say, more easily spot enemies lurking in shadows.

Note, though, the TV doesn’t currently feature eARC over HDMI, meaning it can’t pass lossless multichannel audio streams onto a receiver/ soundbar. Dolby Atmos via Dolby Digital+ does play out from the TV’s Netflix app, however.

The QE65Q90R’s other smart features are extensive. As expected, Samsung continues to 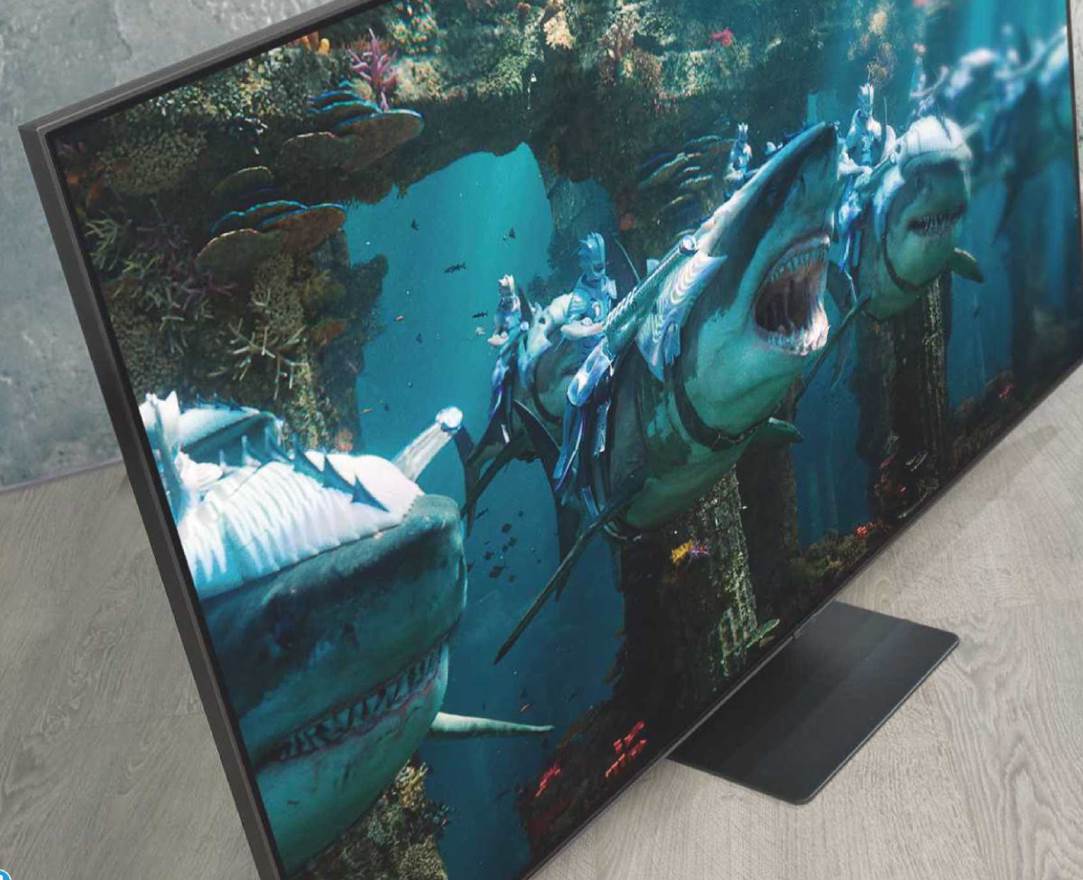 offer all the most important UK catch-up TV apps, plus 4K HDR Netflix, YouTube and Amazon Prime Video support. There’s also impressively effective voice control via Samsung’s Bixby engine, and support for Alexa and Google Assistant via external devices. You’ll also be able to use the Apple TV app and iTunes via an update later this year, as well as AirPlay 2 features.

The panel/processing refinements that Samsung has brought to the QE65Q90R deliver mostly astounding results that could at times be mistaken for OLED were it not for their extra, LCD-based brightness and colour punch.

The First Man 4K Blu-ray offers a stern test for any LCD TV thanks to its intensely bright shots of the moon and brightly reflective spacecraft appearing against the blackness of space. The QE65Q90R does a stunningly effective job throughout, delivering the film’s extremes of darkness and light without one compromising the other. During the lunar landing sequence, the surface of the moon, the whiteness of the astronauts’ suits, and the radiant ball of the sun appear blisteringly bright, while the black backdrop remains unsullied by general greyness or localised backlight blooming. The only exception is some gentle blooming around stand-out bright objects that creeps in when you’re watching from off-axis. This is one wide viewing-angle LCD issue that hasn’t been fully fixed.

The sharpness of its native 4K pictures is exquisite. Highly detailed content, such as the non-CGI footage in the 4K Blu-ray of Mortal Engines, comes across rich in texture,

‘The sharpness of its 4K pictures is exquisite. Detailed content is rich in texture, depth and refinement’

depth and refinement, and without any of the occasional shimmering or ‘bitty’ noise sometimes visible on previous 4K TV generations.

With good-quality HD sources, Samsung’s revamped 4K upscaling engine is efficient, adding a sense of detail and image solidity without overcooking source noise, grain or hard edging. Yet the processing is arguably even more exceptional when it comes to lower-quality content.

Feed it a heavily compressed online stream, or standard- definition TV broadcast, and it focuses more on smoothing away blocking and mosquito noise than pushing sharpness. The result is far more watchable, immersive images than such sources frankly deserve.

The QE65Q90R’s colour performance is beguiling, too. Capable of delivering a measured 2,050 nits on a 10 per cent white HDR window, it produces exceptionally bright, expanded saturations with the dazzling 4,000-nit master of Spider-Man: Into The Spider-Verse’s 4K Blu-ray. And the reduction in backlight blooming/leakage plays its part here.

You can generally enjoy more subtle but also punchy colours in very dark parts of the picture. I say ‘generally’ because a quirk of the new backlight control system can occasionally see small parts of the picture looking strangely faded. During the text that opens Blade Runner 2049 on 4K Blu-ray the redness of the word ‘Replicant’ is almost completely faded out until the rest of the white text appears next to it. Or at least that’s the case in the Standard picture mode that gives the best black levels and contrast. Switch to the Movie preset and the situation with the onscreen text improves, but only at the expense of greyer black levels and much less vibrant colours.

There’s more general shadow detail in the image’s darkest areas in Movie mode than you get in Standard mode, unless you nudge brightness up. However, while the Movie preset is also supposed to provide a more ‘accurate’ image, my feeling is that most people will find the Standard mode overall more pleasing – and certainly a better example of the screen’s full capabilities.

Standard dynamic range pictures are markedly darker than those of last year’s Q9FN models. I’m not sure why Samsung has gone this way, although it’s notable that the QE65Q90R’s images are more reflective of SDR’s low native mastering brightness values than they were on the 2018 sets. It’s a shame there isn’t more flexibility for increasing SDR brightness if you want to. Samsung has also unexpectedly removed its confusingly named ‘HDR+’ system for converting SDR into HDR.

The QE65Q90R isn’t compatible with Dolby Vision dynamic HDR. It does, however, handle the rival HDR10 + format, which works on a broadly similar basis – at least in the sense that it adds extra scene-by-scene data to a basic HDR10 master. However, while 20th Century Fox and IMAX now offer HDR10+ on a small number of 4K Blu-rays, and Amazon Prime Video now uses HDR10 + on its HDR streams, there remain far more sources available in Dolby Vision.

The TV’s default settings cause a few issues.

The Eco mode, which is on by default in the Standard setting, causes the picture to become too dark for blackout viewing, so be sure to turn it off. Also, neither the Auto Motion or Digital Clean View noise reduction processors are quite as adept at adapting to different scenarios as they might be, requiring some manual intervention for the best results.

Overall, the visuals here are ground­breakingly good, setting a standard for LCD TVs that should give even the most die-hard OLED fans pause for thought, and the onboard audio system is strong too; the speakers have enough power to create a fairly wide soundstage, with noticeable effects placement.

This high-spec TV sets out to improve on previous QLED generations and succeeds - viewing angle, upscaling and black level all get a boost. An excellent 4K HDR performer.

The QE65Q90R is undoubtedly expensive for a 65in TV, and it may be that the step-down Q85R series hits a better price/performance mark. But even with that caveat, there’s no denying its appeal and Samsung’s refined approach to LCD deserves the highest praise

gets you this mid-range ‘Cinematic Soundbar’ system (with wireless subwoofer and Acoustic Beam dispersion tech). It incorporates upfiring drivers to complement onboard Dolby Atmos/