The most aordable Samsung QLED model with a full array local dimming backlight, and an excellent all-rounder. Bright, with excellent contrast and rich colour, plus plenty of smarts.
126 0
SaveSavedRemoved 0 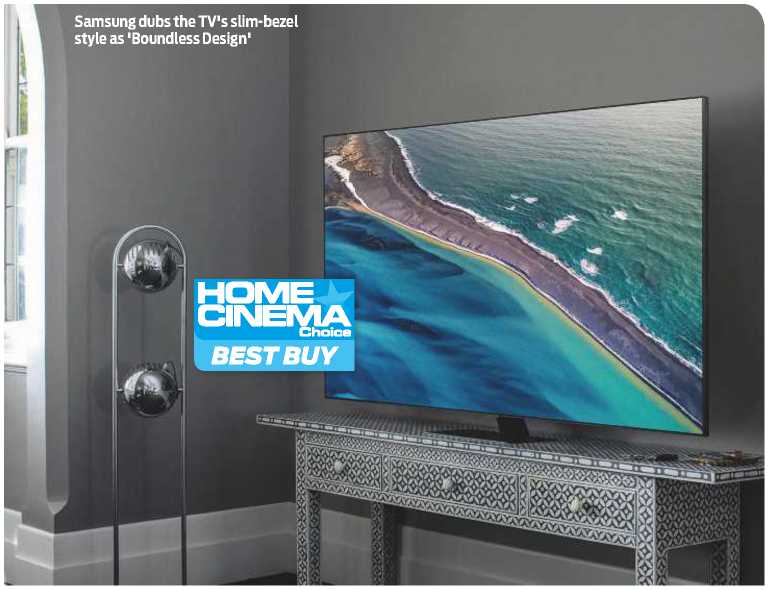 SAMSUNG’S QE65Q80T IS a high-performance 65in QLED TV that will find plenty of admirers. Also available in 49in, 55in, 75in and 85in screen sizes, it’s the cheapest full array local dimming (FALD) backlight TV in the brand’s 2020 QLED lineup. It’s also positively rammed with user-friendly features.

Actually an update on 2019’s Q70R, rather than a revision of last season’s Q80R, it shares the same number of backlight zones as that model, which is around 50. Not a huge amount, but good enough to minimise HDR blooming and maintain screen uniformity.

Connectivity is class-leading, with an eye on next-gen sources. There are four HDMI inputs, with 4K/120 support on HDMI 4, and eARC on HDMI 3, and the TV offers VRR and ALLM, plus FreeSync support for PC AMD gamers.

In short, if you’re a joystick jockey, it’s got your back.

In Game Motion Plus, a preset which maintains blur/judder reduction, image lag measures a solid 19.7 milliseconds. But if you really want to hone your skills, then Samsung’s hardcore Game mode drives lag down to just 8.7ms.

It’s a smart cookie too. Streaming and catchup apps are delivered via the Tizen smart platform (there’s no Freeview Play tuner); Samsung’s Ambient mode turns the Q80T’s screen into an artwork display; and design-wise its ultra-thin screen frame and central stand are easy on the eye.

Doing much of the heavy lifting regards picture quality is Samsung’s new Quantum Processor 4K engine. This trickles down innovations from the brand’s 8K range, using AI smarts to handle image upscaling. Samsung claims it can distinguish native detail, then through comparison with a texture database create more of the same. I found it works brilliantly well with lower-resolution streaming content.

There’s a rather limited selection of image presets – Standard, Dynamic, Natural and Movie – but rather than encourage you to wrestle with them, the Q80T offers an Intelligent Mode with adaptive brightness and

adaptive sound, designed to optimise performance according to content.

The screen’s HDR performance is on point. I measured peak brightness at just under 900 nits, which means it can handle most HDR content with little need to tone map. Note that there’s no Dolby Vision playback, however.

Contrast and wide colour vibrancy is outstanding, and motion handling is also commendable. Samsung’s Auto Motion Plus settings have adjustable blur and judder reduction to play with – I opted to turn blur down and keep judder around 4 – or you could just opt for the Auto setting.

Emphasising the Q80T’s ambitious nature is its sound system. Rather than constrict audio to standard stereo drivers, there’s an additional pair of rear-mounted speakers top left and right. As a result, the TV presents an unusually wide and high soundstage, while Samsung’s OTS (Object Tracking Sound) feature adds directionality to onscreen movement. Dialogue is locked centre-stage, while objects appear to pan around it.

This TV doesn’t take advantage of Dolby Atmos encoding (although you can stream 3D audio out over HDMI), but overall you do get something akin to a Phil Spector wall of sound. And it’s not short of dynamic punch, either.

With considerable 4K HDR talents (the lack of Dolby Vision is countered to an extent by a high peak brightness), plus a connected specification primed for next-generation consoles, powerful smart system and innovative audio, this is a flatscreen that’s easy to FALD in love with

This Swiss army knife of a 4K TV mixes a fine HDR performance with above average audio performance. Few are better equipped...

£849.00
Added to wishlistRemoved from wishlist 0