158 Views
STR takes the quirky side of  Puppy Linux out for a walk.
Technology is constantly  advancing and in recent years  we’ve seen processors move  from single core to multiple cores and  for their physical size to shrink  considerably. Linux distros have also  grown over this time with a typical  install now weighing in at around 4GB. 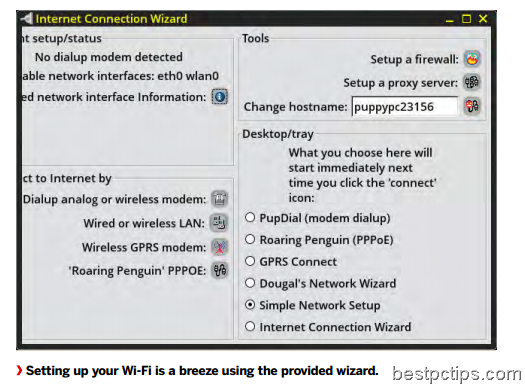 But what about older tech? Do we  throw it away or can we recycle it with a  lightweight Linux distro? Enter Quirky, a radical fork of Puppy  Linux – an excellent lightweight distro in  its own right with a 140MB download –  which is a test bed for new ideas, hence  the name Quirky. It started out as a pet  project for Barry Kauler back in 2009,  the original creator of Puppy Linux and  the goal of the project is to be as small  as possible. 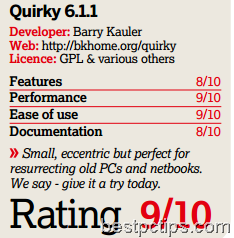 Quirky stays true to the ideals of  Puppy; being made for older PCs and  optimised for use on USB drives and  media cards and as it stands, Quirky is  a 110MB download. On the face of it,  there are very few cosmetic changes  when compared with Puppy Linux. 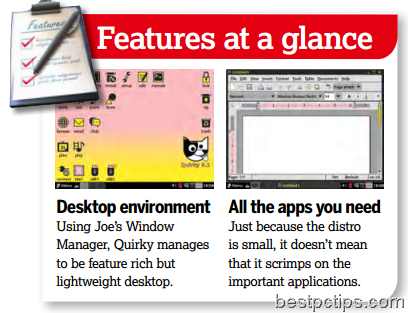 The real differences are under the  hood, where Quirky has made some  unconventional choices. For instance,  the downloaded image is a single  partition or drive, which has been tuned  using F2FS to ensure a snappy  response on elderly kit. It also only  installs in full, dispensing completely  with loading initrd.gz into memory for  a temporary root file system.
On the desktop, you will find low  resource versions for most of the common applications: For instance,  LibreOffice is replaced by Abiword and  Gnumeric word processor and  spreadsheet software. The desktop is  ably represented using JWM (Joe’s  Window Manager); a lovely light window  manager that isn’t used nearly enough.
There are tools for both wired and  wireless internet connectivity and a  wide range of wireless chipsets are  supported. But what’s most striking  about Quirky is that it is easier to use  than Puppy, a bold statement indeed as  Puppy is a breeze.
Quirky but clever Quirky can be installed onto a variety of  media and is especially suited to flash  memory, such as USB and SSD drives.
The installation method requires a little  knowledge of partitioning and setting  up a disc, but it is straightforward.
We had a couple of niggles when  using Quirky. First, we couldn’t follow  the instructions that would copy the  image to a USB drive, no matter what  we did it failed to work, so in the end we  used ddto copy the image across. It’s  not a major issue, but it could be a  bumpy ride for some users.
Second, the other issue was setting  the default screen resolution, which was  800×480 on an original Eee PC. The  closest we could manage without  editing config files was 640×480, but for those of you with a standard  resolution your mileage may vary.
However, a great feature is the ability  to save your current machine setup so  that when you next boot up, you will not  have to configure all of your hardware  and software again.
Even with these issues, we still think  Quirky is great. While it’s not for all  users: Those that need to re-purpose  old kit, but still require the latest kernel  will find this a very worthy distro for  their toolbox. The choices made by  Kauler are radical but they’ve paid off  and created a quick and lightweight  cutting-edge distro. In fact, you could  say the lineage of Puppy Linux proves a  good pedigree for this distro.
7Review earns Amazon affiliate commissions from qualifying purchases. You can support the site directly via Paypal donations ☕. Thank you!
Related Articles