The new flagship of the Debut range packs an enviable specification into a compact form. Ed Selley puts it through its paces. Read our Pro-Ject Debut Carbon EVO Review.

Over the course of its more than 20 years of existence, the Pro-Ject Debut has transformed from plucky upstart into a complete range of turntables that no longer represent the most affordable members of the Pro-Ject range, but are instead affordable all-rounders that balance simplicity and ease of use with the scope for a bit of upgrade ‘stretch’ as and when you fancy it. 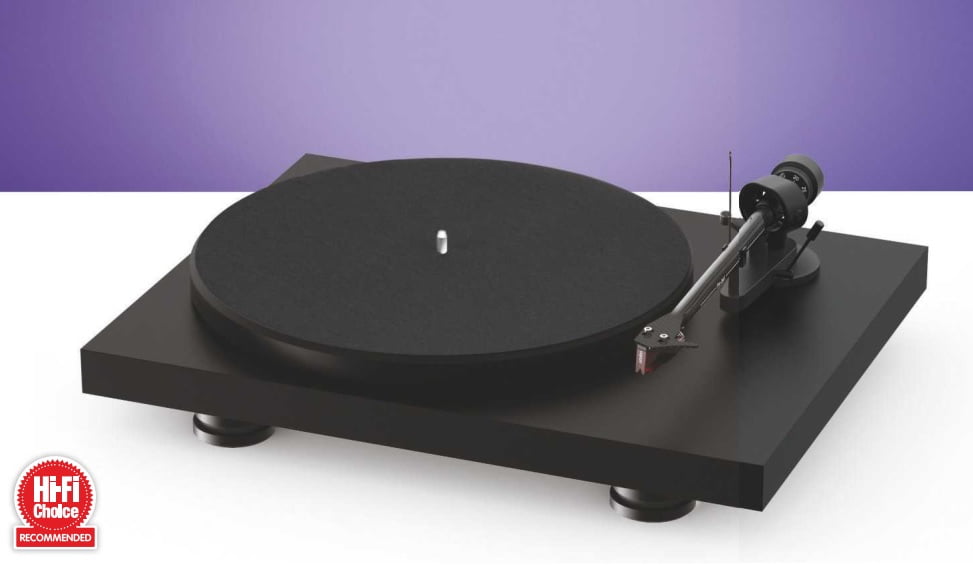 The Debut Carbon EVO is the latest addition to the family to go on sale and, as the name suggests, improves upon the specification of the earlier Debut Carbon (HFC 361). All the defining characteristics of the Debut line; 8.6in tonearm, belt drive and unsuspended plinth are present and correct as they have been in the past, but each of them has been tweaked and enhanced in the pursuit of an improved performance.

The tonearm, for example, is the same effective length as before, but the single-piece carbon armtube now moves on sapphire bearings and

boasts upgraded internal wiring. Unlike the arms previously fitted to more affordable Pro-Ject turntables, both tracking force and antiskate are fully adjustable, allowing any cartridge that works with the effective height of the arm to be fitted. For UK models, an Ortofon 2M Red comes supplied as standard.

The motor and platter arrangements have also been augmented. The platter is constructed from steel and has a TPE damping ring applied to the inner edge, which makes it much more inert than Debut platters of old. This sits on a sub-platter that the belt acts upon. The Carbon EVO has electronic speed control as standard and this works via a three-position switch. Press it left for 33rpm, right for 45rpm and centre it for off. This works pretty well, although on the review sample selecting 33 results in the platter rotating briefly at a higher speed before settling down, which looks a little odd. It is impressively pitch stable, though, and as 78rpm is also available when using a second belt, flexible too.

Harder to spot but no less useful in performance terms is the work Pro-Ject has put into isolation. The motor is decoupled from the rest of the plinth via a new mount that also makes use of TPE damping. This is partnered with a trio of feet that are both damped and equipped with level adjustment. It might be hard to get truly excited about turntable feet, but this is an area where Pro-Ject probably now has an advantage over any similarly priced rivals. Even the more affordable models have very well-designed feet and Carbon EVO is able to effectively isolate the playing surface almost regardless of what you choose to sit it on.

The appearance is a further reflection of the high quality of engineering involved. At a glance, you can tell it is a Pro-Ject Debut, but the more you study it the more some of the details and tweaks start to become clear. Something that was also apparent on the more affordable T1 (HFC 464) is that the overall aesthetic has been tidied up so that the Carbon EVO feels clean and modern as a result. The review sample is finished in walnut, but there is a wide selection of colour options available in both gloss and matte 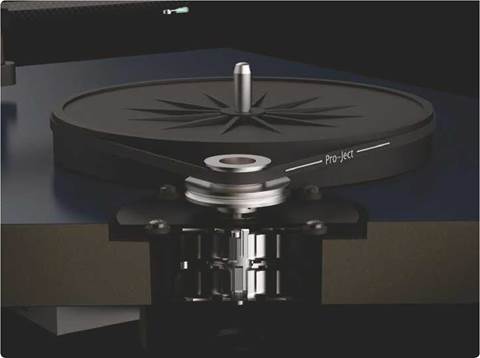 finishes including some previously unseen options like Fir Green and Steel Blue. The build quality feels entirely commensurate with the asking price and the setup remains pleasingly straightforward too. Pro-Ject supplies a good-quality grounded interconnect in the box and some tweaks to the packaging and extraction process mean this is probably the easiest Debut turntable to setup I’ve yet to encounter.

Connected to a Cyrus Phono Signature (HFC 408) and running into a Chord Electronics CPM2800 MkII integrated amplifier and Kudos Titan 505 standmount speaker (HFC 451), the Pro-Ject does a fine job of disguising its relatively humble origins. Noise levels at idle are commendably low and that admirable pitch stability once running is reflected in absolutely unwavering tone, even on sustained piano notes and other tricky tests.

Indeed, the tonal realism across a wide spread of material is extremely good. The gorgeous Night & Day by Jon Allen is delivered with its emotional content very much at the forefront of the presentation. Allen’s slightly rough vocal edge is well reproduced and the placement of him and his guitar is believable and possessed of a sense of scale that switches effortlessly between something small and intimate like this and the rather more ambitious output of the Hidden Orchestra.

Part of this ability stems from the impressive bass response. The Debut has improved considerably in this regard over the years and the Carbon EVO is the best manifestation yet. The hefty low end of Dead Can Dance’s Dionysus is reproduced with genuine force, but never to the extent of it dominating the rest of the frequency response or lacking in control and cohesion. I’d venture so far as to say that this is some of the best analogue bass you can currently get your hands on for under £ and it puts the Pro-Ject above many equivalently priced rivals.

I’m also impressed by the balance between accuracy and emotional content that it delivers. Without ever feeling anything other than consistently believable, it finds the

It’s easy to setup and use, well made and unfussy about where you place it

angst and anguish in Christine And The Queens’ What’s-Her-Face, while capturing the very personal nature of the lyrics for vocalist Heloise Letissier. The Carbon EVO never leaves you a simple onlooker to material, instead it involves and demands your attention in a way that is fairly unusual for such a relatively affordable design.

The foibles of the turntable by contrast are commendably limited. With a more aggressive pressing like 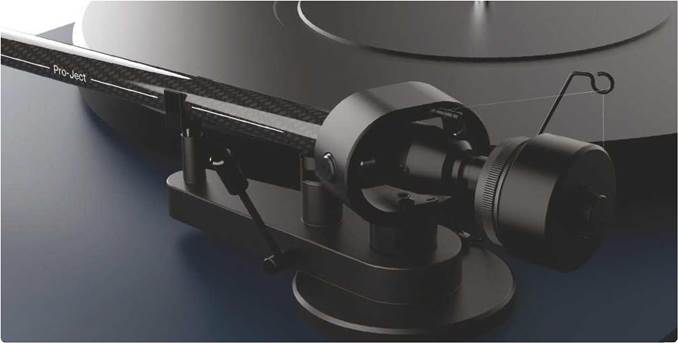 The Desired Effect by Brandon Flowers, the Pro-Ject makes it clear that this is not a great piece of mastering. Some of this is down to the 2M Red cartridge that is bundled as standard. The Ortofon is a capable but somewhat unforgiving device and the Carbon EVO delivers its performance in an entirely unembellished way. Happily, the simple expedient of switching to a

2M Blue stylus (HFC 375), which I’ve always found to be a little sweeter in its presentation, significantly reduces, if not eliminates this and so represents a simple enough upgrade for any would-be owner.

The other aspect of the Carbon EVO’s performance is rather more subjective and intentional. Even when listening to something effortlessly upbeat like Public Service Broadcasting’s Inform – Educate -, Entertain, this is a device that flows rather than delivering in-your-face- style immediacy. This seems to be something of a house sound for the brand and, while it can leave really energetic music feeling like it needs a fraction more oomph to truly deliver, the flip side is that it further boosts its ‘all rounder’ attributes as there’s very little in the way of equivalently priced equipment that I can’t see it gelling very well with. A short stint connected to a more price comparative Rega io (HFC 464) and Triangle Borea BR03 (HFC 466) sees the Carbon EVO compliment this duo exceptionally well. The spaciousness of the Pro-Ject’s presentation in particular is ideal for increasing the limited soundstage of smaller and more affordable speakers.

What this equates to is a turntable that is staggeringly competent. This is a level of performance that generally hasn’t featured as part of the (inflation-adjusted) sub-£ price bracket before and it is a convincing demonstration to rivals that Pro-Ject is very much one of

the top dogs in this area. In the Debut Carbon EVO, you get a turntable that is easy to setup and use, well made and finished and impressively unfussy about where you place it. Having delivered on being painless to live with, it goes on to provide a performance that is the easy equal of any remotely price-equivalent rival and that is sufficiently even handed that I cannot see it doing anything other than impressing in most systems. The Debut series might be over 20 years old, but there’s plenty of life in the line yet •

Best Pro-Ject Debut Carbon EVO prices in the US ?

The Carbon EVO shows how the sheer variation in spec available at this price leads to some unusual alternatives. The Elipson Chroma 200 RIAA BT (HFC 467) costs £ more, but if you don’t have a phono stage or a desire to connect via Bluetooth, it is comprehensively outgunned. In terms of pure vinyl replay, though, the Carbon EVO is consistently able to deliver better bass and tonal engagement. Interestingly, the French turntable demonstrates better rhythmic engagement suggesting that the Chroma Carbon version might be an interesting competitor, albeit at an extra £.