PMC’s Twenty5i series is for those who like the finer things in life, suggests Mark Craven. Read our PMC TWENTY5i 5.1 Review.

PMC is a brand with professional audio heritage, something that informs the general styling of its loudspeakers. Cast an eye on its SE series or flagship Fact Fenestria and neither would look out of place in a mixing suite. The Twenty5i range tested here is about as living room as the company gets, but still comes with the promise of studio-grade performance…

Outwardly, these speakers look very similar to their predecessors, the outgoing Twenty 5 range that launched in 2016. Four years isn’t much of a lifespan for a loudspeaker lineup, but PMC has felt an upgrade is warranted, brought about by a trio of new developments. Hence we now have the Twenty5i range.

And really these do look nigh-on identical. The Twenty 5.26i floorstander, on front left and right duty in our 5.1 setup, has the same exact height, width and depth dimensions as the Twenty5.26, because it uses the same lean-back cabinet (for improved driver time alignment), albeit with a new White Si Ik finish option to join the more traditional (okay, more ‘hi-fi’) Wklnut and Oak options.

There’s also a Diamond Black version that adds a premium to the per-pair price.

Best of both worlds

So what is new? Most obviously, there’s an entirely fresh high-frequency driver. The Twenty5.26i – and all other models in the range, which includes two standmounts (the Twenty5.21 i andTwenty5.22i), two other fLoorstanders (Twenty5.23i and Twenty5.24i) and the Twenty5i centre – have a 0.75in Sonomex tweeter, a new concoction in collaboration with driver specialist SEAS. Get close to the peekaboo grille and you can see it’s placed within a 1.5in roll surround. This, says PMC, means the tweeter offers both the wide dispersion of a 0.75in driver and the lower response and higher SPL ability of a larger design. A fibre-glass ‘high-frequency dispersion plate’ is also used to further increase soundstage width.

This tweeter refinement has also resulted in a much lower reach, so on the Twenty5i two-way models a 1.7kHz crossover is implemented. On this three-way tower, however, the tweeter drops out of play at 4kHz, and in steps PMC’s 2in soft dome mid-range driver, carried over from the previous generation.

Below this on the front baffle is a single 6.5in g-weave bass driver, again a continuation from the earlier range, with a crossover at 400Hz.

This feeds into PMC’s Advanced Transmission Line (ATL),the company’s spin on transmission line bass-loading. This claims to control the energy from the woofer ‘in a much more intelligent, efficient way than speaker designs based on ported or sealed boxes,’ and uses a lengthy inner cavity (effectively 33m on this model) lined with acoustic material to absorb unwanted frequencies.

There’s only one new driver here, then, so the rest of the Twenty5i series’ claimed performance boost comes from an entirely new crossover and vibration-reducing plinth stands.

The crossover uses ‘military-grade’ fibre-glass boards, connected via pure copper tracks, and – unusually – employs steep 24dB-per-octave filters at each crossover point. We’re told extensive testing even includes altering the orientation of elements on the board.

The new stand for the Twenty5.26i is an engineering trickle-down from PMC’s Fact Fenestria. Assembling it is a bit of a process, involving attaching anti-vibrati on plinths,

I. There’s a dedicated stand for PMC’s centre channel available as an optional extra 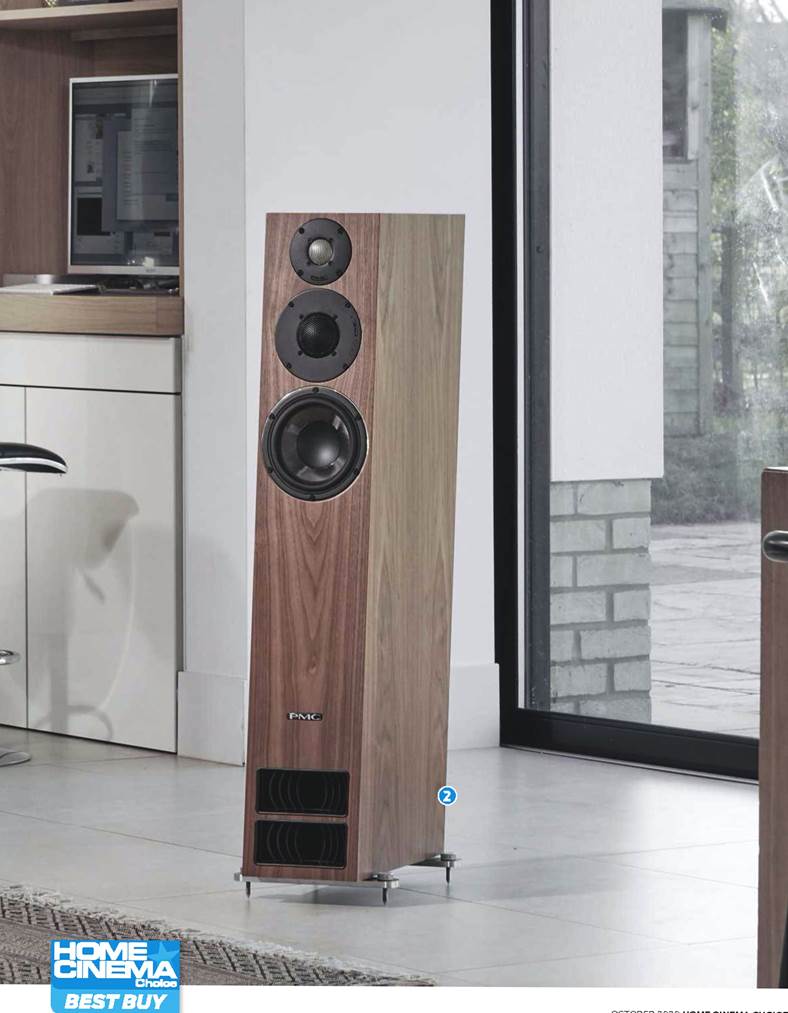 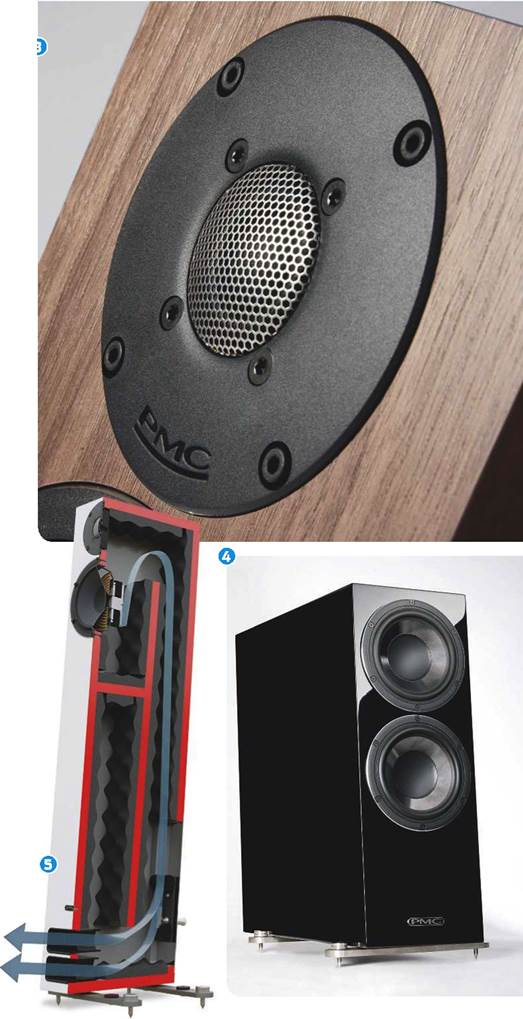 then fitting the stainless-steel spikes (very sharp, so be careful) and damping discs that aim to decouple the speaker from the floor.

PMC doesn’t sell bundled multichannel packages. Buyers instead are invited to pick and choose. With this in the back of my mind, I opted for a system with floorstanders both fore and aft. This might see m extravagant, but the price of the two-way Twenty 5.2 4i tower is only around £ more than the two-way Twenty5.22i standmount, so doesn’t feel that significant considering the cost of the rest of the array.

Again an ATL speaker, the Twenty 5.24i features the new tweeter, and a single 6.5in woofer. Two woofers are used on the centre model (the Twenty5i), flanking the HF unit, but these are smaller 5.5in iterations.

‘A sound delivery that has you tensing up, completely immersed in the drama. This is A-grade audio’

Rounding out this array is PMC’s Twenty5.sub, which hasn’t been changed since 2016. A tall, slim design with twin Laminair ATL ports for its dual 6.5in woofers, this is clearly descended from PMC’s pro background, offering analogue XLR connections and digital inputs, with associated digital EQ.

None of these speakers are particularly sensitive (the Twenty5.26i is the worst offender with an 86dB rating), and as such should be partnered with amplification beyond the entry-level. But that’s probably obvious.

Having heard an earlier generation of PMC’s Twenty series (the 2014-era range), I knew I could expect a sound performance majoring on musicality, nuance and transparency. So I began with Bad Boys Fort ife (UHD Blu-ray) to see how this setup coped with a soundtrack that’s often more about aggression than articulation.

And it fared superbly well. In truth, there was a little recalibration necessary on my part, as I’m mostly used to hearing this mix on boisterous Atmos soundbars and home cinema-centric sub/sat arrays. Now I was watching Will Smith and Martin Lawrence shoot their way through an abandoned hotel lobby almost from a different perspective.

This 5.1 setup is able to extract the finest and faintest of details, and place them carefully, lovingly within its sound field. As the scene builds towards its inevitable explosive finale, there are mice and birds occupying the deserted building that seem to be alive in the room around me. The quiet, creakiness of the location is really evoked, and the excellent dispersive characteristics of PMC’s floorstanders, not to mention immaculate imaging, create the feeling of being put perfectly in the round.

I do have a criticism of this array, though, and I’ll get it out of the way early. The Twenty 5.su b is not a monster woofer, which you can probably tell just by clocking its dual 6.5in design. There’s no doubt it can drop deep, and is supremely well integrated with the other speakers – there’s an even flow from sub-bass to mid-bass to treble in this system that’s simply delicious.

But with certain moments in the Bad Boys mix, such as the helicopter crash, I wanted a little more slam and attack; a little more unbridled subwoofer lunacy to match the onscreen mayhem.

Having said that, with the first sequences in Blade Runner2049 (UHD Blu-ray), I was quickly rethinking my opinion. The bassy swell that accompanies the eyeball close-up was deep, rich and grew and grew in output with the subwoofer never sounding like it was straining. The sense of control it has, which smoothed over some of Bad Boys’ rough edges, was beneficial to the scene here.

Skip to K about to ruin Sapper Morton’s day, and the Twenty 5i speakers are in their element. Everything about the slow-burning scene in the latter’s grubby kitchen just sounds ridiculously natural and refined. From just five speakers, you get a seamless bubble of sound. Minor details, such the simmering pot and footsteps on floorboard, are articulated with finesse rather than just plonked into play. Dialogue is nuanced; Ryan Gosling clipped and professional, Dave Bautista gruffer and (seemingly…) resigned to his fate. It’s the sort of sound deliver/ that has you tensing up, completely immersed in the drama. And when the fight breaks out, the dynamics are extreme. Fists connect with wall with a high-frequency crack, layered atop a lower-frequency punch from the sub. This is A-grade audio.

PMC doesn’t yet sell any Dolby Atmos upfirers or integrated models, and I don’t expect it to start soon either. It believes the best solution is in/on-ceiling speakers, the same as in film mixing suites. I was surprised, though, at how adept

‘There haven’t been many other 5.1 systems I’ve heard with such a detailed and all- encompassing soundfield’

this array was at capturing some of the sense of height routinely thrust into modern soundmixes. In B/aote Runner 2049, it was there when K’s ‘spinner’ takes off; with Bad Boys For Life, when the hotel roof collapsed. Not overhead, of course, just the result of speakers with a wide dispersion and a multichannel system singing in unison.

The Colin Farrell Total Recall remake (Blu-ray) has some superb sound design, and it thrilled through this 5.1 set. Chapter 8’s car chase features the pulsing engines of vehicles zipping across the soundstage, accompanied by slick, LFE whumps. The score hammers along underneath as the chase develops, and there’s the grate of metal on metal as police cars crash. It all sounded crystal- clear and without a trace of distortion. It’s an unfatiguing delivery, smooth but not in a bad way, and one that you could listen to for hours.

.Aid if it’s musical mastery you seek, you’ve come to the right place. Use the TwentyS.26i pair for traditional stereo and you’ll enjoy an image that’s clean enough to pin-point instrumentation, and wide enough to send music way beyond the speakers’ edges. The airy electronic soundscapes of Fuego by KOAN Sound (16-bit/44kHz FLAC) extended for miles, leaving me sat in front of a detailed, deep stage of rhythmic throbbing bass, lush synths and hand-clapped percussion, with high frequencies smooth and unfettered. And with those floorstanding surrounds and overall cohesion, it’s a great setup for multichannel music too.

My time spent with this PMC sextet was pretty eyeopening, as there haven’t been many other 5.1 systems I’ve heard with such a revealing, detailed and all- encompassing soundfield.

Of course, in the world of loudspeakers different sonic signatures appeal to different ears. There’s none of the warmth here that some big floorstanders engineer, and some might consider the purity of PivIC’s treble handling lacks an element of attack. The subwoofer, meanwhile, is fast, responsive and never flustered, rather than aggressive and overtly largescale.

Add your review
back to menu ↑

This power amplifier claims a prodigious 7 x 150W (8 ohm) delivery, and comes with unbalanced phono and balanced XLR inputs, making it suitable for high-end processors including Marantz’s own AV8805.

£299.99
Added to wishlistRemoved from wishlist 0