Philips’ 65OLED903 sees the brand teaming up with UK sound experts Bowers & Wilkins. The idea is that the latter’s sonic knowhow, combined with Philips’ picture quality prowess, results in a TV that’s a genuine all-rounder, and one that delivers a cinematic experience. The partnership has certainly got off to a good start, with the OLED903 scooping the ‘Home Theatre TV’ prize in this year’s EISA Awards. 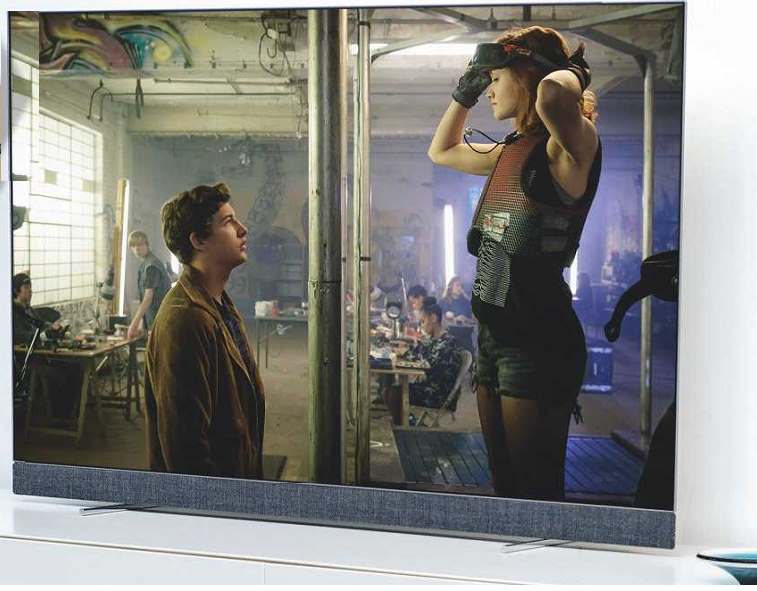 The set also bagged an IF Design Award earlier this year. The bodywork is gorgeous – an ultra-slim, metal- finished frame perched on a pair of narrow feet that become almost invisible when you’re viewing the TV head on. More visual appeal comes from Ambilight, whereby coloured light emerges from the TV’s top, left and right edges, and can match the hue, intensity and location of colours in the images onscreen. It has the joint benefit of both looking cool and putting less strain on your eyes during dark-room viewing, but I’d recommend turning the feature’s brightness down a few notches.

Tucked between the screen and those minimalist feet is the OLED903’s full-width built-in soundbar, the first fruit of Philips’ relationship with B&W. This presents a 2.1-channel configuration, with a trio of rear-mounted bass drivers (two passive, one active) joined by left/right channels combining titanium dome tweeters with glass fibre cone midrange drivers. As well as these new materials, B&W’s involvement has introduced stiffer enclosures for the HF/MF units to reduce resonance; isolation of the drivers; and new motor systems.

The immense dynamics of Deadpool 2’s soundmix (4K Blu-ray) surprised me; bass is deep, rich and e xpands to handle the increase in sound scale that always accompanies the arrival of Juggernaut, while blending excellently with the lower mid-range and never feeling overblown. The front-firing design ensures there’s a direct sound to all non-bass effects.

Treble effects are pristine and well placed rather than harsh or lo-fi. The mid-range sounds clean, dynamic and expansive, and the audio boasts a helpful height element to it as well as a good sense of width.

The only niggle is that dialogue can occasionally sound like it’s coming from below the screen.

Great though the 65OLED903’s sound is, it’s still the TV’s pictures that steal the show. Refinements made to its P5 picture engine work with the strengths of OLED technology to good effect.

The P5 system deals with key picture elements – colour, contrast, source optimisation, motion and sharpness – on a single chip, in an order designed to get the finest results. The processing feature with the best name – and which has the most jaw-dropping impact – is the ‘sparkle and darkle’ effect. Somehow this manages to achieve brightness peaks during HDR viewing that are far more dazzling than I’ve witnessed with other OLED TVs. Running Deadpool 2 in 4K HDR simultaneously on the 65OLED903 and an LG OLED77C8, the extra intensity in the brightest parts of explosions, reflections on metal, and other small, ultra-bright objects, is remarkable. HDR has never looked so HDR on an OLED display. Awesome.

Interestingly, measuring the TV’s brightness with a 10 per cent white HDR window settles down to a figure of around 790 nits. However, the Philips momentarily hits above 900 nits during initial measurement, providing a potential insight into how the brand’s apparent ‘overdriving’ technology works.

The ‘darkle’ part of ‘sparkle and darkle’ finds black levels looking even better on the 65OLED903 than they usually do on an OLED TV. This is because while the darkest parts of the picture consistently look perfectly black, they also hold remarkable amounts of subtle detail.

For instance, in Harry Potter And The Deathly Hallows Part II, the deep black of Snape’s outfit during his fatal meeting with Voldemort in the boat house is gorgeously, intensely black. Yet there’s fine detailing that makes his figure look three-dimensional, and none of the hollowed-out look witnessed on screens that struggle with ‘just above black’ image content.

The average brightness level with full-screen HDR content is also impressively punchy, meaning it’s not only the little details that catch the eye, and that HDR pictures remain watchable in a well-lit room.

The P5 processor’s standard dynamic range- to-HDR upscaling is also noteworthy. The resulting image has more of a contrast hit than SDR, and this extra light and colour dynamism is added without it looking forced or unnatural. I did find it helped assigning the core contrast setting to Normal in this instance, though, rather than the brighter Best For Picture setting that is preferable for most 4K sources.

PRODUCT: 65in 4K OLED with Ambilight, HDR10+ and Android smarts

3. The stick remote gives access to the TV’s key functions and voice control

more vibrant, yet also more refined and textured, while the walls of the X-Men mansion are clean and smoothly blended rather than banded and blocky. The brightness boost Philips has conjured up with the 65OLED903 also gives colours an appealing intensity and sense of ‘volume’.

New algorithms generally keep skin tones looking natural even though other tones look enjoyably dialled up. There’s still room for improvement here, though, as the occasional tone, usually during bright exteriors, can seem a touch sun-tanned. But generally the combined richness and precision of the 65OLED903’s colours are hard to resist.

The P5 hits continue with motion processing. The various tools Philips provides for removing judder and blur are much more flexible than they used to be, making it easier to find a setting that suits your tastes. Deadpool 2’s super-fast blade fights were handled without generating significant side effects such as haloing or flickering.

The set can also be cajoled into unleashing astonishing sharpness and detail. Deadpool 2 isn’t actually the crispest 4K Blu-ray around, but running it on the 65OLED903 feels like you’re looking at a whole different resolution of TV. Switching to a sharper disc, such as Mad Max: Fury Road,

simply confirms this impression. You can make out far more detail in the film’s battered cars and desert backdrops, yet it feels entirely real and clean. How Philips has achieved this without making the 65OLED903 an 8K screen is beyond me. But I like it. A lot.

Other likeable things about the TV are that you can watch it from any angle without the picture breaking down; it’s new ‘magic wand’ stick remote is beautifully designed and fun to use; and it delivers around 22ms of input lag in its Game picture preset. It also runs the Android TV smart interface/platform more solidly, stably and slickly than Sony’s TVs. Nor does the processing power needed to run Android seem to cause slow downs in the TV’s setup menus.

That said, Android remains my least favourite of the big smart TV systems. It takes over too much screen real estate, doesn’t offer enough personalisation, and shows little understanding of the stuff most smart TV (as opposed to smartphone) users are interested in. Android Oreo is expected to appear on the 65OLED903 before the end of the year in place of the current Nougat system, and early evidence suggests this will deliver a big improvement. Fingers crossed.

While the upscaling of HD is usually outstanding, if your source is particularly grainy – such as Harry Potter And The Deathly Hallows Part 2 on Blu-ray – this grain can become noticeably exaggerated, regardless of whether you stick with Philips’ Ultra Resolution option or not. I even saw occasional white sparklies and ringing around grain points. Philips’ noise reduction processing on its medium or high settings largely removes this noise, but can leave grain looking a bit artificial – like watching the image through a net curtain.

Like the Panasonic TX-65FZ802 there’s no Dolby Vision support here (HDR10+ is offered instead), and only two of the TV’s four HDMIs support the full 18Gbps v2.0a bandwidth. Unlike the Panasonic, the focus here is less on ‘director’s intent’ and more about pushing the 4K and HDR experience to sharper, brighter extremes. Both have their own appeal (and the Panasonic is less labour-intensive when it comes to picture tweaks), but if you want to combine OLED’s contrast strengths with more of LCD’s HDR-friendly brightness punch, the 65OLED903 is currently in a league of its own. And it sounds superb

The brand s smart lighting range can be set up to work in conjunction with its Ambilight TVs, expanding the content- dependent light-show around your cinema room. Start with the smart ‘bridge’ and add bulbs/LED strips.