Optoma’s projector delivers very low latency, a boon for gamers, but it’s also no slouch as a home cinema projector either. Is this the perfect choice for combo media rooms? Read our OPTOMA UHD50X Review. 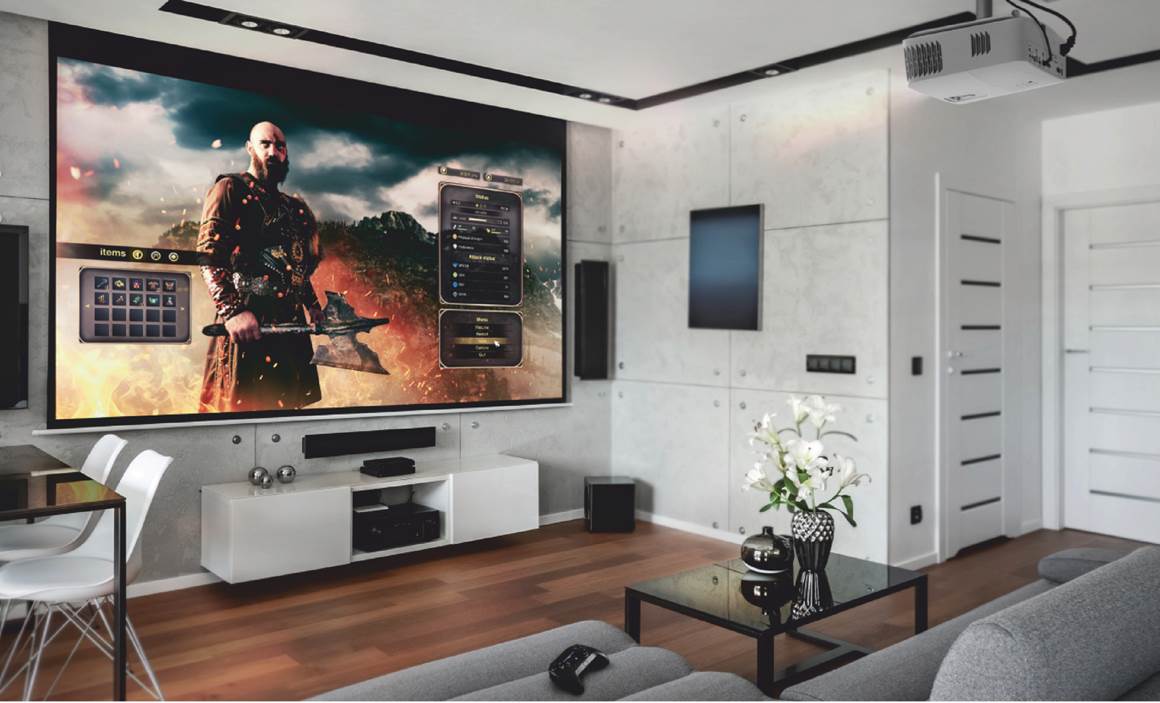 It’s clear at whom our third projector this issue, the Optoma UHD50X, is chiefly aimed. The very first feature mentioned is that this is: “The World’s First 240Hz Cinema Gaming Projector”. Since cinema movies run at only a tenth of that frame-rate, it’s gaming that’s the stand-out feature here.

But there are also plenty of cinema-friendly attributes, like 4K resolution and support for HDR10 and HLG (Hybrid Log Gamma). Let’s look into both sides of this projector.

The Optoma UHD50X is an Ultra-HD projector. It uses a 1080p Digital Micromirror Device with four-way pixel-shifting to generate a true 3840×2160 pixels. Optoma rates its brightness at a very high 3400 lumens, and contrast ratio also very high at 500,000:1.

The lamp is rated at up to 15,000 hours of life depending on the mode you use, although a still impressive 10,000 hours is available in standard brightness.

There are two HDMI inputs, along with a D-SUB15 socket for analogue video. The projector has a 10W amplifier and speaker built in, having also an analogue audio input, along with outputs — analogue and optical digital — so that the projector can offload audio to more competent external speakers.

We will get into the that 240Hz thing for gamers shortly. First, let’s look at the Optoma UHD50X as a home cinema projector.

For that function it has a fairly basic feature set. It doesn’t offer such things as motion smoothing, though much of Hollywood now advises against using motion smoothing anyway. But if you switch Dynamic Black on (it’s off by default), dark scenes are impressive and blacks are nicely deep. Without it switched on, black levels were a little muddy and rather uneven, with a brighter patch showing towards the bottom centre of the picture (with the projector operating in desktop mode). We used a meter and found that the brightest section was receiving around 1500 lux, while the dullest corner was treated to only around 800 lux. Nevertheless this difference was virtually unnoticeable with bright material showing on the screen.

Did this projector deliver real Ultra-HD 4K resolution? Indeed it did. Our test pattern showed clear delineation of its lines and spaces, each of which occupies only one UHD pixel width or height.

And bright the projector certainly was. Even if we left on the full glare of two fluorescent tubes in our test room, the picture was bold, clear and colourful. When we switched out the lights, so much the more so. You can tweak colours to make them more accurate — or to your taste — if you like. But out of the box, the colour settings were very good. There’s also a setting for those who find themselves resorting to projecting against a wall of their home. If it’s not quite white, the ‘Wall Colour’ mode adjusts the picture for a more accurate result on surfaces which are ‘Blackboard’, light yellow, light green, light blue, pink and grey. (Wot, no beige?)

It soon became clear that interlaced 50Hz content, both for 1080i/50 and 576i/50, was simply assumed by the projector to be video­sourced. No attempt was made to detect film- sourced content. While it was motion-adaptive — unmoving parts of the frame were properly woven together to deliver full resolution — for moving sections of the image a simple ‘bob’ is being used. (Bob-style deinterlacing takes the first field of the frame and displays it as a full frame for 1/50th of a second, then the second field of the frame, repeating for subsequent frames.) That generated visible artefacts, particularly on things like finely spaced lines. We’d recommend that you feed this projector progressive-scan content only.

It seemed also that the projector was locked to 60 hertz output — or whole multiples of 60 hertz. Australian-style 50Hz from DVDs and broadcast TV juddered noticeably from the 50-to-60Hz conversion. More surprisingly, 24fps content on Blu-ray and Ultra-HD Blu-ray also juddered (less obviously) due to conversion to 60fps output. As we’ll see, this projector does actually support 120Hz signals, so we’d have thought that 24fps stuff could be displayed smoothly at 120Hertz, with each frame repeated five times.

One last thing on the picture quality: the test patterns on every Sony Ultra-HD Blu-ray (tap in 7669 on your UHD player’s remote when the disc is on the main menu to start these) showed a smooth graduation of black to white, not limited to the mere 256 levels of an 8-bit signal. So the projector works well with HDR signals.

So, how fast is this projector? This is all­important for gamers. Most action games of any kind rely on fast reflexes. A college student typically has a reaction time of between 200 and 250 milliseconds. If the display adds an addition 120ms — not at all unusual for a 4K TV in regular viewing mode — he or she is going to get shot or run into race-car barriers a lot more than they should. A computer monitor will typically get this delay down to around 30ms for 1080p/60 signals. This projector promises 23.8ms for those signals. That time — the delay between the display device receiving the signal and it appearing on the screen — we call latency, or lag.

We use a gizmo that we bought from the UK some years ago to check display latency. This has an HDMI output through which it pumps out a signal in 1080p/60 format. It flashes three white boxes on the screen at top left, mid-left and bottom left. You place its sensor over the light (facing the screen if it’s a TV, facing the projector if that’s what you’re using) and the signal shows the latency in milliseconds. It’s simple, elegant and, as with all measurements, should be taken with a

The bottom line is that the Optoma UHD50X projector has an extremely low latency mode which will maximise performance for gamers. It truly delivers what they need.

grain of salt. (Is the instrument well calibrated? Is it working properly?)

There were two unexpected aspects to the reported results. The first of these was that the projector measured pretty much the same delay at the top, middle and bottom of the screen. It’s far more common to find a marked discrepancy; just about everything we measure usually has up to 7 milliseconds additional delay between top and middle, and again between middle and bottom.

Why? For video running at 60 frames per second, the time between the start of each frame and the next one is 16.7ms. A computer monitor typically just feeds the content as it is received through to the panel. So each frame is ‘painted’ onto the screen from top to bottom, using most of that 16.7ms. With a TV, the entire frame is usually accumulated in memory so that it can be processed and then released to the display panel. That transfer from memory to panel also takes time.

But as far as we could work out, the timing was the same for all three positions with this projector. That would suggest that the transfer of data from the processing memory to the display engine is extremely fast.

‘As far as we could work out’? Yes, that was the other odd thing. When we measured

the delay in Cinema mode, starting with the middle position, the delay was around 55ms, then 54.9, then 54.8 and so on, reducing by 1ms at a pace of a little more than two seconds per step. It got all the way down to a mere 41.3ms then the next step took it to… 57.9ms. And the step-by-step reduction resumed, again bottoming out at 41.3ms before ticking over again to 57.9ms. The results were similar with the regular ‘Game’ picture mode.

When we switched on Enhanced Gaming Mode, the delay started somewhere around 25 milli­seconds, and then it ticked up longer and longer — yes, it went the other way — at about 1ms per second of elapsed measurement time until it got to 28.8ms. And then it ticked over to 24.7ms, and resumed the gradual ticking up again, over and over. 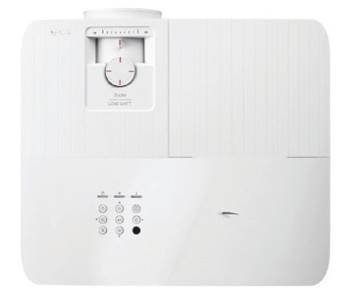 The bottom line is that the Optoma UHD50X projector has an extremely low latency mode which will maximise performance for gamers. To compare: that 24.7ms to 28.8ms at top, middle and bottom of the screen compares rather well to the 21.4ms (top), 28.4ms (middle) and 35.5ms (bottom) that we measured for our regular display monitor. And that’s pretty much straight through.

And while we couldn’t test the latency at high refresh rates, we plugged our computer’s video card into the projector and were able to confirm that it indeed supports 1080p/120 and 1080p/240.

Note, of course, that this is the refresh rate. It does not mean that you’ll be getting 120 or 240 animated frames per second coming from your console or PC. The actual frame rate you get will depend on your computer and graphics card’s rendering performance.

The Optoma UHD50X Ultra-HD projector is clearly targeted at gamers, and it truly delivers what they need. The cinema performance is held back a little by judder, especially with sources like Australian digital TV. But with most Ultra-HD Blu-ray and regular Blu-ray content, the results were very good, with sharp, detailed images and a strong colour performance.

•  Some unevenness in screen brightness

Lamp: Not stated, but conventional lamp with RGBWRGBW colour wheel