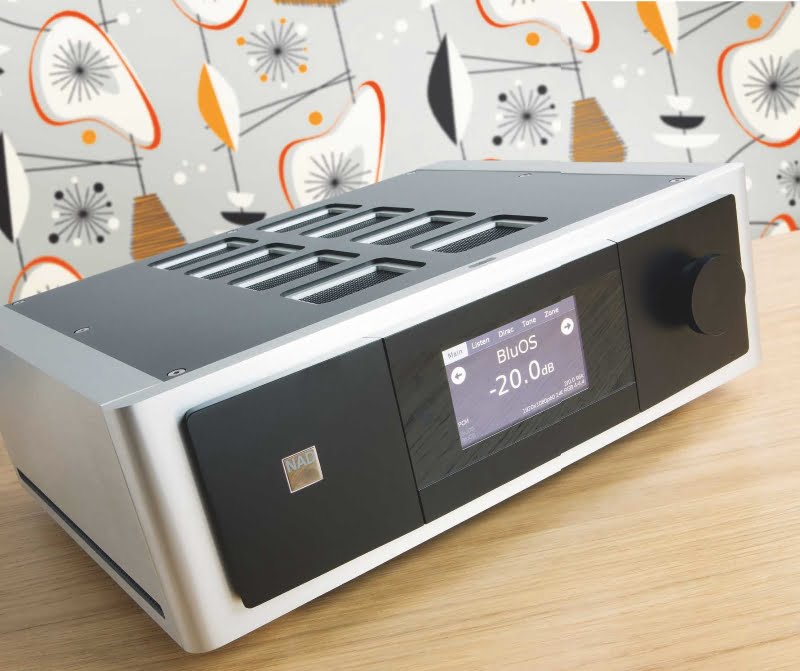 Ever suffered premature obsolescence? Don’t be embarrassed, it happens to all of us. And there’s nothing more annoying than buying a piece of equipment, only to discover not long later that it’s out of date. In our ever-changing AV world, this experience is becoming all too common, not just with TVs, but AV separates too.

NAD thinks it has the solution. Way back in 2006, the Canadian audio company launched its Modular Design Construction (MDC) architecture, allowing customers to upgrade their AV receiver or processor with new technologies and additional features.

The NAD Masters Series M17 on test here uses MDC to upgrade specs to ‘V2’ status, replacing the original digital audio and HDMI MDC modules of the previous M17 [see HCC #245], with a new AM 17 Atmos/SPDIF/Dirac module, and VM 300 4K HDMI and LAN module. The latter adds HDMI 2.0 with support for 4K/60p at 4:4:4, High Dynamic Range (HDR10 and Dolby Vision), and HDCP 2.2 copy protection – all features that any high-end home cinema in 2018 should have.

If you own the original M17 the VM 300 is available for free, while the AM 17 module. A new, factory- fresh M17 V2 forgoes the original’s analogue video MDC module (still present on our unit), although it can be specified as an optional extra.

A firmware update then brings the unit bang up-to- date, including exchanging the original Audyssey room EQ software for Dirac Live, and adding BluOS. The latter, a music management and multiroom operating system developed by NAD’s sister brand Bluesound, includes the excellent BluOS app (iOS or Android). You can access ‘net radio stations and music services such as Spotify, Amazon Music, Deezer and Tidal. In the case of the latter two, there’s support for Master Quality Authenticated (MQA) high-resolution audio.

The only downside to BluOS is that to enjoy the benefits you need to install the upgrade kit, which is basically an off-the-shelf USB hub with a Wi-Fi dongle and a Bluetooth USB micro adapter connected, all of which you plug into the USB port on the back of the processor. It works, but is far from an elegant solution.

NAD’s AM 17 module adds support for Dolby Atmos with decoding for up to 11.2 channels and a 7.2.4 speaker layout. NAD plans to add DTS:X via a firmware update before the year ends – along with BluOS-2i firmware and Apple AirPlay 2 (subject to Apple certification).

The M17 already had outputs for seven channels using either balanced XLR or phono outputs, along with two subwoofer outputs: one using XLR or phono and the other limited to just phono. The AM 17 module adds four more channels using balanced mini-XLR outputs (NAD supplies mini-XLR to XLR adapters), but interestingly there are no corresponding phono terminals.

NAD’s design remains superb. The M17 has a silver/ black two-tone finish and is built like the proverbial battleship, using a machined aluminium chassis with some surprisingly sharp corners. It sits on four built-in spiked feet, but there are also magnetic feet to put under

1. Bluesound’s BluOS music playback system is a new addition to the M17

the spikes if your equipment stand needs protection.

A logo on the left-hand of the front panel lights up when the unit is on and doubles as a power button. On the other side is a large volume dial, while in the centre there’s a touch-sensitive display that is both informative and intuitive to use – my only complaint would be that you can’t turn it off completely, which is annoying in a darkened movie room.

The remote is large and heavy, with an aluminium and black finish that matches the processor itself. There’s a blue backlight which is useful in the dark, but I’m pretty

An incredibly neutral performance, with sonic elements clearly defined and a superb sense of balance

sure it doesn’t require four AA batteries. On the plus side you won’t have to change them very often, and you can use the controller to club any burglars.

The M17 has a simple but effective onscreen menu system, and once I’d wired everything up (using Marantz/ Arcam power amps and M&K Sound speakers) it was fairly easy to set up the processor itself. Operation is user-friendly; the display not only shows the source and volume, but also the incoming audio signal (on the left) and the video signal (on the right).

Dirac Live room correction, added by the AM 17 module, is combined with a new calibration microphone and software available for either Windows or MacOS.

The implementation is identical to other manufacturers such as Arcam, taking nine measurements to produce detailed EQ graphs.

Dirac then applies target curves using supercomputer wizardry to flatten the frequencies and tighten up the impulse responses. The result is an incredibly neutral performance, with individual sonic elements clearly defined, and the overall soundfield retaining a wonderful sense of balance and cohesion.

Although the primary reason for buying an M17 is to use it as a surround sound processor, it is equally capable with stereo music content. It aced my regular two-channel tests, and I particularly enjoyed listening to the newly released ‘Memphis’ recordings of Primal Scream’s Give Out but Don’t Give Up. The M17 created a spacious front soundstage, with effective stereo imaging and localisation of instruments. It delivered the first two rockers with all the swagger they deserved, before weaving through the elegantly wasted blues of the rest of the album.

With film soundtracks this processor really gets a chance to strut its stuff, and it did so with a captivating sense of precision. The 5.1-channel DTS-HD MA mix of 2001: A Space Odyssey (Ultra HD Blu-ray) was played out with an accuracy that surely would have put a smile on Stanley Kubrick’s face. The classical score was beautifully rendered, giving the docking spaceships a sweeping elegance as they dance in time to The Blue Danube. 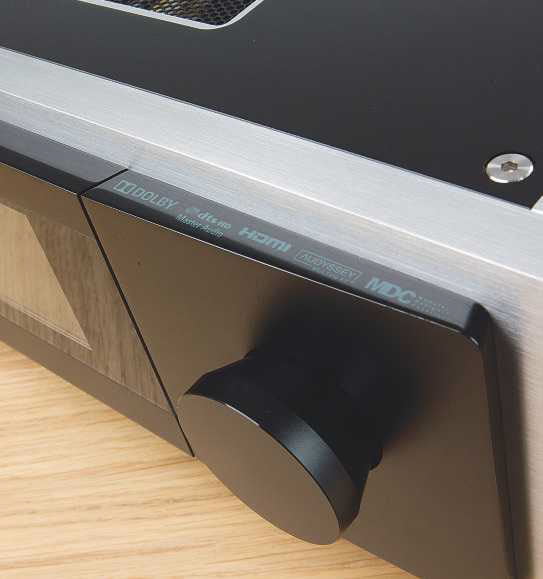 It’s also an incredibly bold soundtrack that has the courage to portray the soundless vacuum of space realistically. You simply hear the astronauts breathing and the hissing of their life support, simple details that proved strikingly effective and realistic via the M17. The film’s various other environments, from the openness of the arid African plains or the clinical and claustrophobic nature of life onboard Discovery, were also handled to perfection, each imbued with their own sonic signature.

Of course, the big selling point of this V2 update is support for the object-based immersive audio formats. The new Dolby Atmos soundtracks on The Matrix Trilogy (Ultra HD Blu-ray) put the NAD through its paces. The famous ‘bullet time’ sequences in the first film sounded, frankly, awesome, as the processor steered the slow-motion sound effects through a clearly defined three-dimensional space.

That sense of a tangible environment was also apparent as hovercraft travelled through the tunnel networks in all three films. The overhead channels were used to create the feeling of actually moving through an enclosed space, while the crackle of the propulsion systems were also clearly defined. The M17 never sounds muddled, just clean and precise. The same was true of the epic freeway chase in The Matrix Reloaded, as cars and bikes weaved through traffic with terrifying, rubber-burning realism. The sequence becomes incredibly visceral as Foley effects create cars zooming past you, or the camera literally goes under a truck.

However, for sheer all-channel action, the third film’s climactic battle in the Zion docking bay proved an aural tour de force. I had sentinels swarming all round my room, moving seamlessly from speaker to speaker. The guns on the armoured personnel units had a massive percussive impact, delivered with exquisite timing by the processor and revealing its ability to integrate my system’s twin active subwoofers with the wider array. The sub-sonic explosions, as all hell broke loose during the battle, were equally well controlled; atop this, I could still hear dialogue clearly, and the sound of shell casings rattling to the ground. It was a remarkable audio experience.

I’m pleased that NAD has kept the audio modes to a minimum, as I’ve never been a fan of esoteric DSP processing. However I am a big fan of Dolby Surround upmixing, which can often make 5.1/7.1 mixes sound like they have genuine overhead channels. HAL’s voice in 2001: A Space Odyssey seemed to emanate from above, making him (it?) seem even more omniscient.

Don’t underestimate the impact of Dirac Live either: activating it results in an immediate improvement in sound quality. Even in my dedicated home cinema, the software’s sophisticated room correction causes the walls to simply disappear, just leaving a film’s carefully designed soundtrack intact. Rain pouring down during Neo’s final fight with Agent Smith in The Matrix Revolutions sounded completely authentic with Dirac engaged, gaining a sense of location and definition.

4K HDR compatibility and Dolby Atmos decoding are now must-have features at this price point, so owners of NAD’s original M17 will be thrilled that the company has fulfilled its promise of upgradability. The addition of Dirac Live is a major bonus too and it really works, eliminating a room’s aural signature from the overall soundfield; the performance here is A-grade, regardless of whether you’re listening to two-channel or a full Atmos system. BluOS integration could perhaps have been better handled, but this adds functionality that gives the new-spec M17 an edge over the (more affordable) Arcam AV860. And, as always with NAD’s MDC components, part of the appeal here is the level of future proofing against tech developments.

A high-end processor with peace of mind thrown in

NAD's processor delivers a masterful surround experience worthy of Masters Series branding, and remains up to date in a rapidly changing AV world.

This hi-res multiroom hub offers a 2TB HDD for music storage, CD ripping to FLAC/ MP3, and access to ‘net radio and network stored content. Use the BluOS app to stream all this through the M17 into your cinema room.

4. One flaw in the MDC process is that it doesn’t remove legacy logos from the fascia – Audyssey has been replaced by Dirac…