Sure but don’t be fooled by the size. That Sport tag should be a dead giveaway. What’s more, LG has made sure to fit in everything but the kitchen sink in this buff watch. And what a body it is!

Encased in 316L stainless steel and Gorilla Glass 3 that protects the screen. 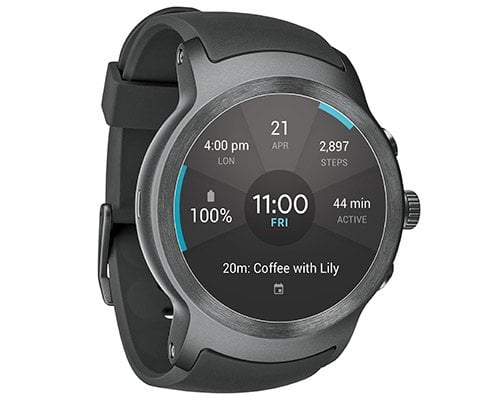 Clearly, you love it. But I do have to say, I like the size of the screen. Bigger is better, eh?

Yup and the most visible benefit of the large size is the 1.38-inch Polymer-OLED touchscreen, making the entire face almost similar in size to a 46mm analog watch. You also won’t have to squint or scroll much either, as it has a generous 480x480p resolution with an ambient light sensor for automatic brightness.

What functions have been assigned to the buttons on the side?

By default the one at the top launches Google Fit while the bottom one opens Android Pay but they are entirely customisable. The middle button with the rotatable crown is what you’ll use the most. Pushing it will open up a list of available apps and pushing it again will make you return to the homescreen, aka the main watchface. The crown is used for scrolling, which should be a boon to those who hate precisely panning on a small screen.

Going back a bit, you were talking about it being quite feature rich.

To paint a few broad strokes, it comes with GPS, NFC for Android Pay, Gyroscope, Accelerometer, Barometer, LTE support, embedded speaker for voice calls and heart-rate sensor. What’s interesting about it is how it doesn’t rest evenly on the back but lies on a 1mm bump, which is supposed to help make better contact with your skin thereby giving a more accurate reading. The back of the watch can be removed with an included pin wrench so that the nano SIM can be inserted.

You should know better! Anything with ‘Sport’ appended to their name will be water-resistant by default. This one though, goes one better – you get proper IP68 dust and water ingress rating. It is water resistant for up to 1.5 meters for 30 minutes.