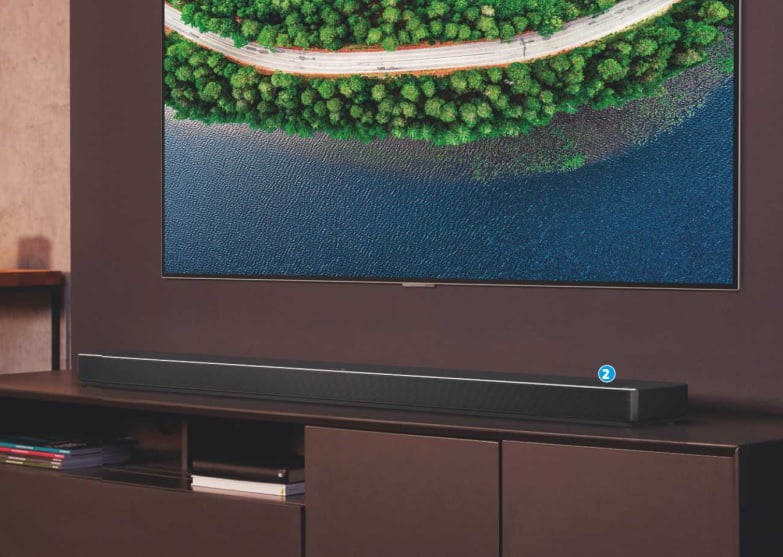 It’s always good to have the option of going large, whether that’s upgrading your McDonald’s order or watching the extended versions of all six of Peter Jackson’s Tolkien movies. Now LG is playing to XL lovers with its SN11RG, which is without doubt its biggest – and best – soundbar yet.

1. The system adds a wireless subwoofer and rear speakers to its soundbar

An early adopter of Dolby Atmos for its soundbar product line, LG has been expanding user options through previous generations, but until now steered clear of what some refer to as the ‘full-fat’ experience. The SN11RG shows no such reticence, combining a soundbar, sub and wireless rear speakers to create a 7.1.4 soundfield.

It bustles into the premium soundbar market currently occupied by the likes of Bang & Olufsen’s Beosound Stage and Sennheiser’s Ambeo. But it’s a different proposition to both.

Meant to accompany a largescreen TV in a media-centric living room or den, the SN11RG’s soundbar element measures almost 1.5m wide. There’s no attempt to make it look like anything other than a soundbar, but the chassis, which matches a brushed aluminium top with full-length perforated grille, is classy. It also feels quite rugged.

Inputs and outputs are located in a rear-panel recess. There are dual HDMI inputs and one HDMI output, plus optical digital audio and a USB port for file playback.

The SN11RG’s sub uses a 7in front-firing driver and is rear-ported. The wireless rears pack both front-facing and upfiring drivers into reasonably compact enclosures.

AI Room Calibration. The latter of those two aims to finesse the SN11RG’s

performance to suit your individual listening environment; the former provides

Elsewhere, this soundbar rolls out LG’s greatest hits when it comes to features, including DTS:X playback (not always a given on soundbars); Google Assistant voice control/interaction and associated Chromecast streaming; hi-res audio playback (and upsampling) to 24-bit/192kHz; Bluetooth 5.0; and Dolby Vision 4K HDR passthrough (but not HDR10+).

There’s also the continued involvement of Meridian Audio in product development and DSP. The exact nature of LG and Meridian’s teamup has always been a bit vague, but this year the promise includes greater dialogue/vocal clarity courtesy of a ‘lifted midrange’.

Bringing up the rear

Initial setup isn’t taxing, although consideration of rear speaker placement is warranted. You may favour putting them left and right of seating (this would still fit within Dolby guidelines for a four-channel height array) but you’ll want those rear channels to be… well, to the rear. That said, LG’s processing will use the rears for the surround channels in a 5.1 mix – to do this you need to turn its ‘Surround’ mode off by holding down the EQ tool button for a few seconds. So it’s possible to map a traditional 5.1 track and not use the soundbar’s side-firing drivers – but only with Dolby encoded content, not DTS. Confused? You will be. Also note the rears – while physically identical – are dedicated left and right. Don’t mix them up…

The soundbar’s presets (AI Sound Pro, Bass Blast, Standard, Movie and Music) have marked differences between them, particularly when surround mode is deactivated because the ‘bar still employs its surround and rear channels with 2.0 material in some modes. Still confused? I certainly was.

Standard, which is described as ‘Premium sound with Meridian 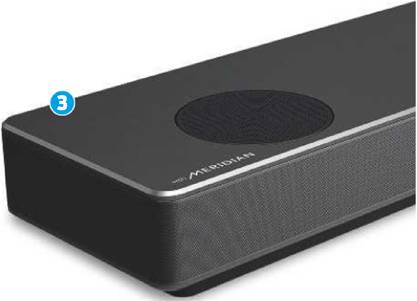 Technology’ is the best option if you want a ‘straight’ playback experience.

While the soundbar’s DSP/channel options can baffle, the good news is that it will go native (and disable all modes) when fed a Dolby Atmos or DTS:X bitstream.

And with a 3D audio soundtrack, this premium system can effectively envelope, thanks – to a large degree – to those rear/rear height channels. The warm, rich delivery and abundant sense of energy of previous LG soundbars remains, only now scaled up to 7.1.4.

The sense of a wraparound soundfield is present in the Atmos mix of Justice League (Blu-ray). Firstly, this reaps rewards when it comes to evoking ambience; the distant sounds of Gotham’s streets pepper Batman’s rooftop

‘The warm, rich delivery and abundant sense of energy of previous LG ‘bars remains, only now scaled up to 7.1.4’

arrival in Chapter One, placing you right in the scene. And when more precise effects positioning is demanded, the SN11RG is up to task. The attack on the Russian farmhouse in Chapter 7 features parademons screeching above and around the building, and it’s the sort of sound design that grabs your attention. At around 01.01.40, one of the beasties enters top right, traverses to the rear and disappears across the back. The difference between this 7.1.4 soundscape and the 5.1.2 offering of LG’s 2019 SL8YG is dramatic. There’s no longer the feeling that everything is playing out in front of you, and the balance between front and back is impressive.

In my room I enjoyed an effect of height, if not the overt coming-from-above impact of Atmos separates. Channel levels can be adjusted in pairs. After sampling some Dolby-produced demo clips, I chose to boost both rear and front overhead channels.

Conversely, LG’s sub needs reining in. Opting for more Bat-flavoured fun with the superior DTS-HD MA 5.1 mix of The Dark Knight (4K BD), I was quickly reaching for the SN11RG’s compact handset. When the Joker’s henchman fired his zip wire across the roof, the corresponding bass hit was mightily loud, too aggressive in fact. With the default sub level (‘WF’) lowered considerably (start at -15 and work your way up), the mix began to dovetail together better, and I was able to get more of an appreciation of the soundbar’s other traits, and an improved mid-range clarity to dialogue.

As William Fichtner’s bank manager began fighting back against the Joker’s robbers, each blast of his shotgun was a mix of crisp leading edge and tight LF thud. Shattering glass cracked across the front soundstage, attacking but not brash. Hans Zimmer’s urgent score sounded strong and purposeful. And the side-firing drivers on the ‘bar make a good fist of surround-channel playback.

Even after tinkering, on occasion the sub did sound sluggish with very deep effects, but this didn’t detract much from its overall appeal and ability to convey the weight and scale of film soundtracks. However, when streaming music over Chromecast, it was necessary to raise its level back up. J.J. Cale’s bluesy Midnight in Memphis (Tidal) sounded thin otherwise.

There are more musical and dynamic stereo soundbars out there, but none offer LG’s all-channels-go presentations that can be quite fun; immersive alternatives to the no-nonsense 2.1 of Standard mode.

Oh, what an atmosphere

The SN11RG isn’t without its foibles. Instigating some of its more advanced audio tools (including auto calibration) requires use of a separate LG app to the Google Home one you’ll use to get streaming wirelessly; the soundbar itself is gigantic; and there’s work to be done when it comes to EQ and sound mode selection. Experiment with its various modes and you might often wonder exactly what ‘channel’ you’re hearing from its rear speakers. It’s not cheap either.

But countering this is the sheer enjoyability of its 7.1.4 playback (you’ll only buy the SN11RG if you want 7.1.4 audio, not least because LG sells more affordable 5.1.2 models). This system evokes the atmosphere of Atmos mixes better than any 5.1.2 ‘bar I’ve heard. Viewed as a smart-featured one-stop-shop sonic immersion machine, it’s a success

LG's well-featured 7.1.4 system delivers big, bold sonics that make movie night a treat. It's not quite plug-and-play, though, so familiarise yourself with presets and tweak the sub.

View
Amazon.com
Last Amazon price update was: December 4, 2021 12:40 pm
× Product prices and availability are accurate as of the date/time indicated and are subject to change. Any price and availability information displayed on Amazon.com (Amazon.in, Amazon.co.uk, Amazon.de, etc) at the time of purchase will apply to the purchase of this product.

3. The soundbar has both Atmos drivers and side-firing surrounds

LG OLED77CX: The largest model in LG’s entry-level OLED series, the 77in CX has the screen canvas to match the SN11RG’s sonic drama. The TV supports Dolby Vision HDR, and treats gamers to 4K/120fps playback.