IF YOU INVITE the neighbours to watch Turning Red on your new LG ‘CineBeam’ HU715Q projector, will they leave an envious shade of green? I reckon so. The Korean company’s take on the (slowly) evolving ‘laser TV’ market is delightfully impressive. Read our LG HU715Q Review.

Clearly hoping to muscle out sector rivals including Optoma and BenQ, the model combines the unquestionable convenience of all-in-one Ultra Short Throw (UST) beaming with the TV smarts of its WebOS platform, plus minimalist design sensibility.

The key appeal of any UST projector is that it can deliver a huge image into virtually any space, with no impact on physical infrastructure or line of sight. Living rooms, dens, lofts and even bedrooms can benefit.

Wherever it ends up, the HU715Q will probably be used with a white wall, but for those with the space and inclination, an ALR (Ambient Light Rejection) screen would be the icing on the cake. However, LG isn’t following the Hisense route in bundling the projector with a screen (see the Hisense 100L9GTUK, HCC #331), so buyers will need to shop around.

Using a wall, setup will only take a few minutes, with just a bit of shuffling required to size the image – you’ll get a 100in picture from a distance of 22cm. There’s keystone correction with progressive 4-, 9- and 15-point adjustment to combat distortion, and it’s at this point most users will probably realise that their chosen surface isn’t ruler flat.

When it comes to design, LG steers clear of flashiness. The unit, which measures just over 50cm wide and 30cm deep, has a white matte finish to blend with pretty much any decor. Even the handset, one of LG’s ‘Magic Remote’ jobs, is finished in matching white and backlit for home theatre duties. The forward-facing stereo speaker array, meanwhile, is clad in tasteful grey Kvadrat fabric.

Rear connectivity is generous. There are three HDMIs, one of which is 2.1 eARC/ARC and supports Auto Low Latency Mode for gamers. There are also two USB ports, one optical digital audio output, and an Ethernet LAN to complement Wi-Fi and AirPlay 2.

While it’s not a native 4K model, instead using TI’s micro mirror flipping technique to deliver pixel-dense images, the HU715Q looks convincingly UHD. It’s also reassuringly bright – LG quotes a 2,500 Lumens output for its laser source (plus a worry-free lifespan of 20,000 hours), and it’s certainly potent enough for daylight viewing. Even in a sunlit room, the picture has appreciable dynamic snap with excellent colour fidelity. Playing a role here is LG’s Brightness Optimiser, which can make automatic adjustments according to ambient light conditions.

Indeed, the PJ looks its best with bright imagery, and animation in particular, making time with Disney+ well spent. Turning Red is this CineBeam’s happy place. The vivid primaries of Pixar’s ‘toon hit are nothing less than stunning, particularly in a dark lighting-controlled room.

Meilin’s first flight home as the giant red panda is a vibrant cavalcade of colour, with a gorgeous depiction of cherry blossom and pottery tiles, and the rich hues and textures of the creature itself. Colour gradations are smooth, with no overt banding.

Dynamic Tone Mapping, which analyses every frame in real time, is available to optimise HDR10 performance (the projector has no truck with the dynamic HDR10+ and Dolby Vision formats). Of course, HDR as managed by a projector like the HU715Q isn’t comparable to the experience of a flatscreen TV, but this LG does a decent job of lifting specular highlights.

The real challenge is just how well this projector handles near-black detail, and, inevitably, there’s a limit to how profound its black level is. The shadowy work environments of videotape archivist Dan Turner in supernatural drama Archive 81 (Netflix) are depicted with more mysterious gloom than the director probably intended, and the show’s night-time New York City street scenes are distinctly smudgy; still, close-up fine detail, as Turner meticulously restores his demonic Video8 tapes, is convincing.

The projector’s image preset selection mirrors what you’d find on an LG TV: Standard, Cinema (and Cinema Home with HDR content), Sports and Vivid, plus Filmmaker Mode, Expert Bright Space, Expert Dark Space (for day or night), and Game Optimizer. I don’t feel the various cinematic modes really show the HU715Q at its best. The Filmmaker Mode, and even Cinema Home, undersell the potential of its laser light engine; the image is just a little flat and stripped of colour volume. Standard is the more obvious crowd-pleaser.

Another familiar LG technology – TruMotion – is present here, and its options are extensive and effective. The Smooth setting works well with fast-moving sports, and even the Cinematic Movement option isn’t objectionable when watching movies. Give it a try.

As for the smart platform, this 6.0 iteration of WebOS offers a strong selection of apps, including Netflix, Prime Video, Disney+, YouTube, Sky Store, Rakuten.TV and Apple TV, plus a Home Dashboard for connected smart devices and LG’s ThinQ voice recognition. There’s no Freeview tuner, but it’s all very slick, and a cut above most rivals.

The same can’t be said for the HU715Q’s audio. This isn’t as punchy as its pictures, with a somewhat boxy and confined feeling to the soundstage. Still, there’s copious volume, and enough mid-range weight to prevent everything sounding thin. You could couple the projector with a soundbar or external system, although that would seem a bit odd, given the form factor.

Minor niggles aside, LG’s latest UST model is a compelling proposition. It’s an outstanding bright room performer, and while I have some reservations about black level proficiency, colour vibrancy and fine detail score high. Well suited for sports and movie use, and with slick smarts too, the HU715Q is easily recommended 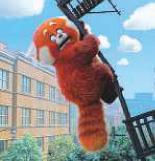 A visually stunning CG animation with oodles of detail and a high-impact colour palette, this coming of age allegory from Bao director Domee Shi leans heavily into anime style, making it stylistically different from other Pixar movies. A real treat for your eyes, either via Disney+ or disc (see p89).