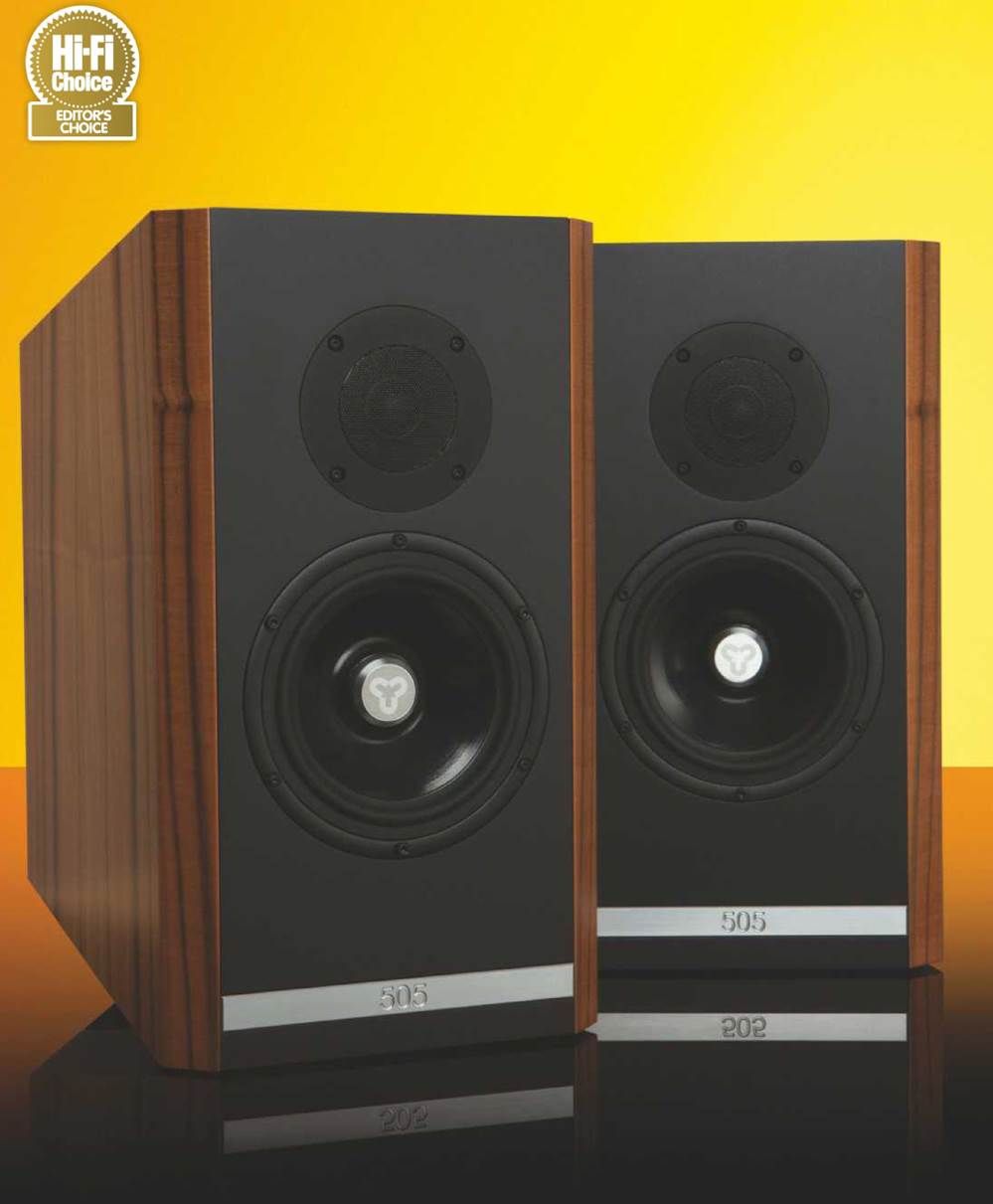 Clash of the Titans

Don’t be fooled by the compact exterior, this is one of the best standmounts that Adam Smith has ever heard

With plenty of audio brands looking to the Far East for their production, it’s easy to forget that the UK has some very sturdy manufacturing strings to its bow. In hi-fi terms, one of the most enduring industries is that of loudspeaker production and while the ‘big boys’ may have many of their bread and butter models built in China, flagship designs are often assembled by hand here in the UK.

Kudos Audio is still something of a whippersnapper to the loudspeaker market in relative terms and the County Durham-based company is headed up by Derek Gilligan. With a background in professional PA systems, Gilligan originally worked with his brother and the two gained

Basslines come through strongly and cleanly with stunning definition

something of a reputation for obtaining superb sonic results in the most acoustically challenging venues. When he’d had enough of travelling, he turned his eye to domestic speakers and co-founded another British success story, Neat Acoustics, with Bob Surgeoner. The company acquired the Kudos brand in 1989 – at the time it was a support stand manufacturer – but when Gilligan decided to branch out on his own in 2006, he took the name with him.

The successful and well-liked Cardea speaker series put Kudos on the map, but Gilligan flexed his design muscles properly in 2015 with the launch of the Titan 808 flagship. Smaller models duly followed to develop a range and the new baby of the bunch is the Titan 505 standmount you see before you. This impressively chunky yet sleek design retails for £ per pair in its standard finish or for £ complete with matching stands, which can also be bought separately for £. Standard finishes are tineo, red tineo, walnut, satin white or black oak, with gloss black or gloss white lacquer finishes commanding an extra £ premium.

On the face of it, the 505 appears to be a relatively conventional two-way design, but a third drive unit lurks inside. This is identical to the main 180mm driver, featuring a doubly coated paper cone, and is mounted back to back and wired out of phase in an isobaric configuration. A rear bass port is incorporated into the bottom panel. Treble is handled by a 29mm soft-dome tweeter made, like the bass drivers, by Norwegian specialist SEAS. The tweeter is referred to as a SEAS-Kudos K3 type, and is based on the well-known Crescendo K2 driver but with some additional modifications by Gilligan. In addition, the mid/bass driver is a design specific to Kudos, and features copper shorting rings on the pole piece for lower distortion, plus the distinctive aluminium phase plug with engraved logo. Mating the two units is a typically minimalist Kudos crossover featuring low order slopes.

To control resonances, the cabinet is constructed from high-density fibre board that varies in thickness, and constrained layer damping is also a feature of the side panels. In addition, the internal baffle to which the second bass driver is mounted acts as a further brace. As a result, the heavyweight and remarkably solid cabinet passes the time-honoured knuckle-rap test with aplomb.

The matching stand is well worth the extra outlay as the pair look superb together. It has seven legs; six of which can be filled with your choice of sand, audiophile gravel or other suitable damping material. I use some Atacama Atabites from my own speaker stands and find that around half full is about right.

For auditioning, the 505 is fed by my Naim Supernait integrated, with sources including a Naim CD5 XS/ FlatCap XS and a Michell Gyro SE turntable sporting SME 309 tonearm and Clearaudio MC Essence cartridge into an Anatek MC1 phono stage.

I start off placing the 505 in a similar position to where my usual speakers normally reside, but this makes the bass a little lumpy so I try it further away from both side and rear walls. After some trial and error, the final position sees the speaker around 45cm from the side walls and just over 90cm from the rear, with a slight toe-in towards my listening position for the most stable soundstage.

The 505 has an even tonal balance that doesn’t highlight any particular part of the frequency range, with everything clear and evenly handled. Imaging is a particular delight with a focus and depth of scale that is at times quite jaw dropping. The backing soprano saxophone from Gretchen Peters’ On A Bus To St. Cloud is always located on the left of the action, but the 505 makes it clear just how far behind the main vocal it is – at one point I wonder if I can get up, wander round the back and tap Phil Kenzie on the shoulder as he plays.

The Kudos is an absolute master of soundstaging. It paints a vivid sonic picture between the cabinets and pulls the main action out towards the 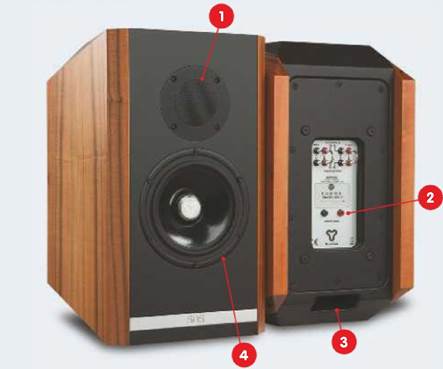 listener while layering the backing aspects perfectly behind. Lateral image width is broad, but without the feeling of artificial showiness. Precise imaging like this is often achieved by designs housed in far larger cabinets, but the 505 can hold its head up high.

The other thing that usually requires much larger cabinets is decent, hefty bass and this is another area in which it performs with aplomb. OK, so the positively gargantuan low-end on Trentemoller’s Chameleon gently points out it’s a little short of being a monstrous bass behemoth, but even so the multi-layered basslines come through strongly and cleanly with stunning definition and no hint of discomfort. The isobaric bass driver configuration is clearly paying dividends here and ensures the music delivery always sounds big. This is a trick we’ve all heard now and then from small transducers that sound impressive initially, but turn out to either be over ported and working too hard, or just bloated at the bottom end and thus suffer in detail terms.

In looking to see if there are any chinks in the 505’s armour in this respect, I draw a complete and utter blank. No matter what I throw at it, it remains composed, deep and punchy. However, slipping the likes of Paul Simon’s Graceland into the CD player also reveals that the low-end detail retrieval is truly first class. Bakithi Kumalo’s fretless bass underpins every track exquisitely, with each note distinct and well formed.

Treble performance is truly the icing on the cake. There is a seamless handover from the mid/bass driver to the treble units and the wealth of detail that the SEAS-Kudos K3 unit extracts is exceptional. That said, the standmount never sounds hard or bright and I do initially wonder if it’s a little over smooth before quickly realising that it’s missing absolutely nothing. Playing devil’s advocate, I can imagine that some rockers might want a little more ‘edge’ to the performance, but otherwise it’s perfectly judged. Cymbals are crisp and have a deliciously metallic sheen, and guitar string plucks are sharply etched and perfectly defined.

The 505 more than earns the right to bear the Titan moniker. Kudos has extracted a truly room-filling sound from a relatively small cabinet and this standmount is an absolute delight with whatever material you care to feed it. Personally – speaking as a fan of big, brawny loudspeaker designs – my time with more compact cabinets can often end with a feeling of compromise but this certainly isn’t the case with the Titan 505, which is absolutely brilliant, full stop •

Impressive scale and dynamics make this a remarkably engaging standmount

Interestingly, there really isn’t a great deal of competition for the Kudos Audio Titan 505 at this price point. Raidho’s compact XT1 at £ (HFC 433) brings a superb ribbon tweeter to its standmount design and makes an interesting alternative, but I feel that the Titan delivers more get up and go for the money. Sweden’s Marten Heritage Duke standmount costs £ and is rather special too, with its high-tech Accuton ceramic drive units. The brand is distributed in the UK by Harmony HiFi, but ultimately it’s the Titan that has the edge.

AS: What benefits do you feel the Titan 505 offers over its floorstanding brethren?

DG: The main benefit is simply the fundamental Titan performance and design principles in the smallest and most affordable package. The 505 was initially developed to push boundaries and see just how far we could shrink the reference Titan 808 design and engineering principles. From a design perspective there are also advantages to come from the fact that the panel sizes are smaller and therefore easier to control from an energy and vibration point of view; or in other words, less problematic to put right. The Titan 505 also offers an alternative to the Titan 606 in some room acoustics.

What do you consider to be the advantages of the isobaric bass loading system used on the 505?

The isobaric arrangement in the Titan series is less conventional than most, due to it being a little more difficult and expensive to produce. As well as the usual benefits from isobaric loading like speed, punch, timing and control, we also favour a magnet-to- magnet configuration. As the internal rearward-facing unit has to be wired in the opposite phase and as long as we keep the magnets in very close proximity to each other, the current is therefore running through the motor systems in opposite directions, which has the very useful side effect of greatly reducing harmonic distortion. This leads to the incredibly powerful and clean bass performance achieved across the Titan range.

Who do you see as the main customers for the 505?

The Titan 505 was designed for the customer who is a dedicated enthusiast that doesn’t want to compromise on performance, but is either limited on space or prefers the acoustics from a standmount loudspeaker over a floorstander.

£775.00
Added to wishlistRemoved from wishlist 0