Amazon’s new Kindles might not command the headlines as they once did, but the retailer continues to sell e-readers by the bucketload and is more dominant in the sector than ever.

Kobo, however, is keeping up the fight and its latest offering, the Aura One, is a premium device with a generous 7.8in screen that has its sights set firmly on Amazon’s Kindle Voyage and Kindle Oasis. 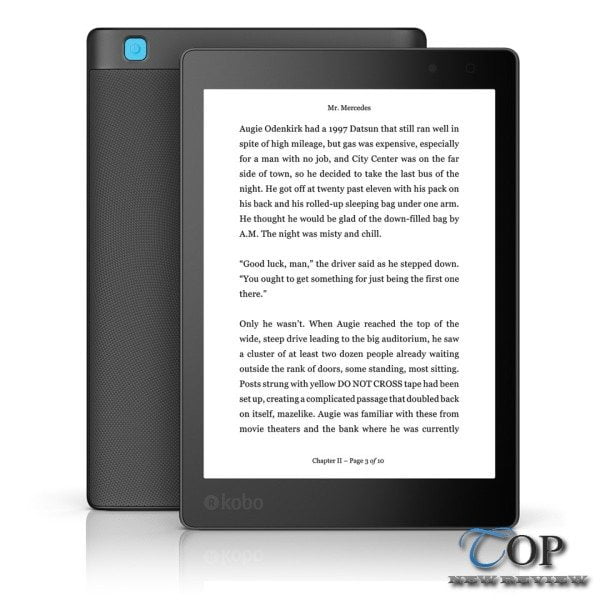 With such a large screen, the Kobo is closer in size to a small tablet like the iPad Mini 4 than a standard e-reader. This has the advantage of fitting more words per page, providing a less cramped read. On the other hand, it’s significantly more cumbersome than the smaller 6in Kindles and is heavy for an e-reader at 230g.

There’s no debating the quality of the Aura One’s 1,872 x 1,404 resolution display. With a pixel density of 300ppi (pixels per inch), it matches the Kindle Voyage and  Oasis, which is as sharp as E Ink displays get.

It holds some key advantages over its rivals, too. For starters, it has an ambient light sensor that automatically tunes the light’s brightness to match your current lighting conditions. In Amazon’s range of e-readers, only the Kindle Voyage has this feature, but the Aura One goes one better with its “ComfortLight Pro” filter, which gets rid of blue light in a bid to improve sleep quality for anyone who likes a good read just before bed.

If that wasn’t enough, the device is also waterproof, so you can read in the bath and not worry about it suffering a dunking.

The Aura One’s only major shortcoming is that it doesn’t have a microSD card slot. However, its 8GB of internal storage should be enough for all but the most ardent of ebook hoarders.

Battery life, meanwhile, is rated at “up to one month” – a figure that will vary depending on how long you spend reading each day and the brightness setting used for the front light.

Much like Amazon’s devices, the Kobo’s interface is extremely easy to use. The homepage does a great job of displaying recent activity and providing access to the Kobo book store, and the Aura One gives you plenty of choice when it comes to font types and sizes when you’re reading.

Kobo’s bookstore doesn’t have the breadth of choice that Amazon’s does, but the Aura One supports a greater variety of file formats. What’s more, Kobo’s library lending programme means you can also use your Aura One to borrow ebooks straight from your own public library for free, as long as you have a library card.

The Kobo Aura One may have its downsides but it’s still one of the best Kindle competitors we’ve come across in recent years. Its ComfortLight Pro option goes one better than the Kindle Voyage’s ambient light sensor, while its waterproof protection means you can read in more places without risking damage to the unit.

Its broad file support makes it more flexible than a Kindle, although Amazon still has the edge when it comes to pricing and overall range.

The Kobo Aura One isn’t cheap, but if you want a book-sized e-reader for reading at night, it’s worth the extra investment.