Part of Klipsch’s Heritage Wireless series, The Fives sets out to give a tiny taste of what it’s like to own a grown-up Klipsch without having to drop £ on the La Scala AL5. Whether you’re an old-school wired-for-sound audiophile touting a 3.5mm-to-RCA phono lead, a smartphone-wielding Bluetooth dude, or a digital fanatic with a Toslink cable, you can make music play through this speaker. Plus The Fives connects to your TV via HDMI-ARC (Audio Return Channel), so you can switch between the audio sources hooked up to your screen (like games consoles, etc.) – in effect making it a superior soundbar. There’s even an RCA line input with a switchable moving-magnet phono stage. Oh, and don’t forget the USB input, letting you play music from a computer at up to 24-bit/192kHz PCM resolution. Finally, there’s a subwoofer output should you wish to turn The Fives into a 2.1 system.

It’s all well and good having a highly versatile set of powered loudspeakers, but such packages can be compromised by the fact that they’re gimmicky with cheap and nasty cabinets, drive units and amplification.

The Fives is more robust than you’d expect at the price. Genuine walnut wood-veneered MDF is more than most rivals offer, and there’s the option of a matt-black finish.

Lurking inside each cabinet is a 25mm titanium TLS-vented tweeter, with Klipsch’s proprietary Tractrix horn; this is a version of the premium high-frequency drivers found on its Reference Premiere range. Claimed benefits include increased efficiency, controlled directivity, greater dynamic sound and a wider soundstage. Sharing the action is a custom-designed 110mm long-throw fibre composite coned mid/ bass unit, loaded by a Tractrix port – inspired by the Heritage range.

The electronics inside serve up a claimed 160W RMS of power, with a maximum quoted sound pressure level of 109dB (at 1m). The juice comes

The package is augmented by the inclusion of a suite of different leads – including 4m of four-conductor speaker cable, a 1.5m USB Type-B-to- USB Type-A cable and a 1.5m HDMI. The soft mat on the underside of each speaker is a nice touch and avoids scratches to the cabinet or the surface it’s placed on. The remote control is easy to use and there’s also a Klipsch Connect app, which currently only supports product registration and access to updates, but will soon add EQ adjustments and other features.

Being an old-school stick in the mud, I am not easily charmed by powered speakers. Happily, however, The Fives delivers a half-decent sound by grown-up hi-fi standards. Across all sources, it proves fast and fun yet more refined and listenable.

Firstly, I’m sceptical of the quoted frequency response; Nookie’s Give A Little Love is a hard-hitting track with some serious subsonics. This speaker is prolific in the upper bass, with a satisfying punch that’s unexpected from a powered package at this price – but it starts to tail off under around 100Hz. This is just what you’d expect from a compact cabinet such as this, so don’t take it as a criticism. Tonally, things are reasonably smooth through the midband, ever so slightly recessed perhaps before rising a bit to give the treble some added spice.

While the high frequencies are quite explicit, they aren’t as harsh as I’d feared. I’m left in no doubt of the cut-through of the hi-hat in Marillion’s Kayleigh, but it is satisfyingly fast and percussive. The sound of the piano in

Debussy’s The Submerged Cathedral is well etched and blessed with sparkling harmonics, but doesn’t ‘clang’ out at me. Vocals in Thunderclap Newman’s Something In The Air are well resolved yet don’t screech, The Fives instead basks in that thick, syrupy bass guitar. Ultimately, there’s a good deal of Klipsch’s characteristic ‘shock and awe’ that makes music fun, and this powered speaker is better than expected.

Without a shadow of a doubt, the star attraction is the speed and grip. This is largely courtesy of that fine tweeter, which has lightning-fast transients that are in turn leveraged by the horn loading. This unrelenting turn of pace never fails to make music enjoyable; you’re always being reminded of the attack of – for example – the strummed steel string guitar chords in Pale Shelter by Tears For Fears. Play this track on

rivals and it’s as if they mysteriously recede into the moonlight, whereas The Fives constructs the whole song around it. Also, there’s never a drum kit that this speaker doesn’t want to be close to – I love the snare ‘thwack’ in The Smiths’ The Headmaster Ritual.

Spatially it’s great too – imaging is as ‘out of the box’ as you can expect for an inexpensive powered speaker. I find it is able to create a believable three-dimensional space, Especially via the analogue inputs. Feed it a good source and the sound takes a clear step up from Bluetooth. The digital input is very decent for this sort of product, so you can stick it on the end of a CD transport or Blu-ray player and enjoy an atmospheric sound. The way it handles a live recording of Rush’s Tom Sawyer is really holographic, with fine image location too. Overall, you never fail to be moved by the music.

If the aim is to get a hugely enjoyable sound with minimum of fuss, Klipsch has succeeded. Yes, proper separates sound better, but that’s not the point. As a quick, easy and inexpensive way to unlock the world of music, this is a great package to get you started.

Klipsch The Fives Powered Speaker System with HDMI-ARC in Walnut 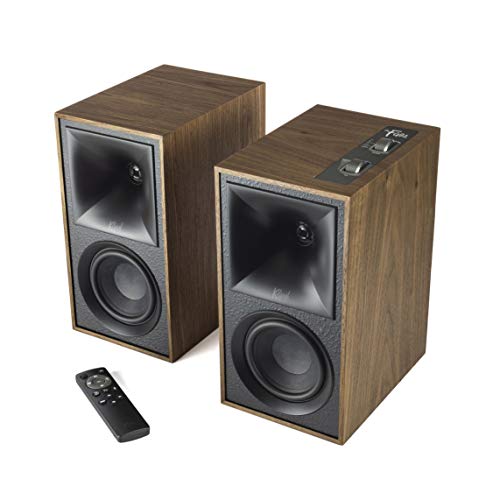 Klipsch The Fives Powered Speaker System with HDMI-ARC in Walnut
$799.00
in stock
as of August 1, 2021 3:39 am
BUY NOW
Amazon.com
KLIPSCH THE FIVES WALNUT (COUPLE) 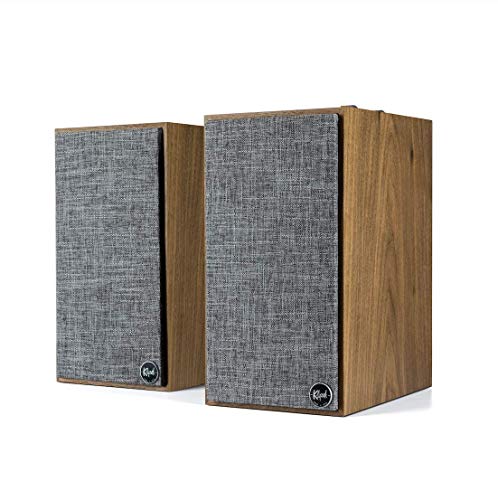 Acoustic Energy’s AE1 Active is perhaps a more sober and traditional take on this sort of powered loudspeaker. It might not have horn loading, but the sound is more balanced with slightly better bass extension and a smoother treble, with an impressively even midband. It’s lots of fun, but doesn’t have the speed and bite of this Klipsch package, even if outright detail is better. Well worth an audition, if you’re serious about sound.