JVC extends its lineup of native 4K projectors in the shape of the DLA-N7B. Steve Withers investigates 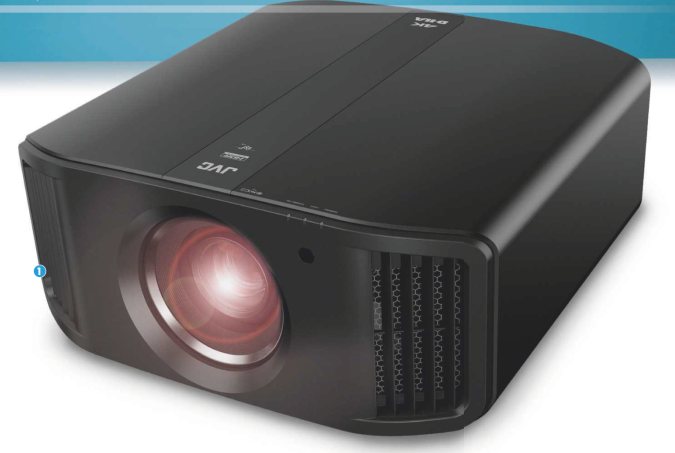 It’s taken a while – a surprisingly long while, actually – but JVC has finally embraced native 4K projection. Yes, I know the company released the DLA-Z1 laser projector two years ago and that was a genuine 4K device, but it was also thirty-five grand and the size of a hatchback. So, unless you’re Jeff Bezos, it was hardly affordable.

The DLA-N7B is part of a new range and sports the same native 4K D-ILA device first introduced on the DLA-Z1. While not exactly cheap is hardly spare change – it does bring native 4K projection down to a level that’s more in line with a home cinema fan’s budget.

If the DLA-N7B’s price is liable to bust your wallet there’s also the DLA-N5, although I hesitate to call that model ‘entry-level’. The DLA-N7B boasts a wider colour gamut and slightly more Lumens, but whether that justifies the price difference is debatable.

So what do you get for your hard-earned readies? Aside from the increase in native resolution, the features are largely the same as previous models, including a low- latency mode, Clear Motion Drive, Multiple Pixel Control image processing, and extensive ISF calibration controls.

The DLA-N7B has a claimed brightness of 1,900 Lumens, and there’s no need for any e-shift jiggery-pokery thanks to its native resolution of 4,096 x 2,160 pixels.

Naturally there’s support for high dynamic range (both standard HDR10 and broadcast HLG), but new this year is Auto Tone Mapping. This allows the projector to read HDR static metadata and optimise the image accordingly.

Building up a sweat

The DLA-N7B looks like it’s just completed a course of steroids. You get the same basic layout, with a central lens and air exhaust vents on either side, but the updated chassis is larger and considerably taller. It’s best described as functional, but then this 20kg PJ is meant for dedicated home cinemas; it’s not the kind of projector you whip out for movie night or the FA Cup.

JVC has decided to drop the motorised lens cover that graced earlier models, and the DLA-N7B only comes in

matte black, making the ‘B’ at the end of its model number rather redundant. At the rear you’ll find all the connections, along with air intake vents and some basic controls.

The remote has had a makeover, and the new zapper is smaller and more comfortable to hold. The button layout is sensible with all the controls you’ll need, including a backlight. When pressed the text on each key illuminates, making them easy to read in a darkened room.

The connections are composed of two HDMI inputs (supporting 18Gbps 4K HDR transmission up to 60fps), an RS-232 serial connector, an Ethernet port, and a 12V trigger. There’s also a USB port for firmware updates, and a mini DIN 3-pin connector for the optional 3D synchro emitter.

You can place the projector on a stand or ceiling-mount it using a bracket. The DLA-N7B is primarily designed for medium and large home cinemas, and includes a 2x zoom.

Installation is a doddle thanks to motorised focus, zoom and very generous shift controls. You simply use the remote to align and sharpen the image. The controls are precise.

The lens control memory is now included in an installation sub-menu along with features such as pixel adjustment and masking. Users can create up to nine settings for various screen aspect ratios and content.

The Natural picture mode will get you closest to the industry standards. For movies leave the CMD (frame interpolation) feature off, but it can be effective with sport.

When the projector receives an HDR signal it automatically selects the correct picture mode. However, you might want to select the 6500K colour temperature and BT.2020 colour space to ensure optimal performance. Engaging the dynamic iris can also prove beneficial.

The new Auto Tone Mapping feature includes a slider that adjusts the overall brightness for larger screens, with the default zero setting based on 100in. However, this feature isn’t always able to read the metadata, so there are times when you may have to do a bit of manual tweaking.

The DLA-N7B is whisper quiet in operation, with a 20dB measurement in low lamp. In part this may be due to the larger chassis allowing for better cooling, but you also don’t have the annoying sound of the e-shift device whizzing backwards and forwards within the lens assembly.

Any doubts about the benefits of native 4K projection are quickly dispelled when watching even a regular Blu-ray. A top-notch transfer like Star Wars: The Force Awakens looks stunning, with an image that revels in rich, natural colours and a contrast performance that really pops.

During the Millennium Falcon’s visceral chase through the crashed star destroyers on Jakku, JVC’s upscaling renders all the detail in the twisted hulks despite the frenetic motion.

The PJ delivers marvellous blacks as Rey flies through the superstructure of one of the wrecked ships. The black level performance isn’t quite as impressive as the previous DLA-X7900B, which had a higher claimed native contrast, but the DLA-N7B is still superior to Sony’s 4K projectors.

2. The remote has also been revised to be more compact and less cluttered

1. The N7B uses a new, larger chassis design over the previous DLA-X7900

A bigger difference is that JVC’s new 4K projector is free of the fuzziness that e-shifting introduced.

When it comes to HDR, it proves a stellar performer, and the Auto Tone Mapping is particularly compelling.

With Blade Runner 2049 (4K BD) it not only exposes all the fine detail in this native 4K presentation, but also the rich colours of Roger Deakins’ cinematography, particularly during the orange-infused Las Vegas scenes; the projector’s wider colour gamut (it can reproduce 100 per cent of DCI-P3) means you’re getting the full benefit of HDR, with well saturated and highly realistic hues. It displays these vibrant swathes of colour without introducing a hint of banding, and delivers the bright highlights outside the casino windows without any clipping while also retaining essential shadow detail inside the nightclub.

First Man (4K BD) includes a number of scenes that are particularly difficult for any HDR display, let alone a PJ. For instance, when Apollo 11 arrives in lunar orbit, the Moon is gradually illuminated through the command module window. The DLA-N7B reveals the craters on the lunar surface while keeping the rest of the frame in deliberate darkness. It’s a feat that lesser projectors don’t have the contrast performance to achieve, even with the assistance of a dynamic iris.

Once the lunar module lands, the film switches from 35mm to IMAX and the effect is spellbinding, with strong colours, incredibly fine detail, deep blacks in the sky, and bright white highlights on the spacesuits.

Overall, this pricey beamer offers a superb performance with HDR, rendering the colour palette, extensive shadow detail and luminous highlights that make the format so compelling. The Auto Tone Mapping helps but regardless, this projector can hold its own against any competition.

The DLA-N7B also supports the 3D Blu-ray format, although you will have to buy the necessary emitter and glasses separately. Its performance here is generally excellent, with colourful, detailed images that aren’t blighted by crosstalk or other artefacts. The scene where Thanos pulls a moon down on our heroes in Avengers: Infinity War (3D Blu-ray) is particularly impressive.

There’s a good solidity to the 3D images, but a caveat is that despite the same brightness rating the images appear slightly darker than on earlier JVC models. As a result 3D loses a bit of pop and is thus robbed of some of its impact.

In a different league

There are now numerous 4K projectors on the market of various flavours/technologies. Budget models can be impressive, but the DLA-N7B is in a different league.

It isn’t just that the JVC is native 4K, or that it has a vastly superior contrast performance, it’s also because of the quality of its all-glass lens. This is often where much of the cost goes, and its importance shouldn’t be underestimated. It leads to a remarkable clarity.

The DLA-N7B’s only real competition comes from Sony’s VPL-VW570ES, which is cheaper. That saving is tempting, but the DLA-N7B has the edge in terms of sharpness, contrast, and features. JVC might be late to the native 4K party, but this projector was worth the wait

Add your review  |  Read reviews and comments
Where to buy jvc dla n7b ?

JVC PK-EM2: For 3D playback, the N7B requires JVC’s optional RF emitter, which plugs into the rear 3D Synchro DIN port. Expect to pay around £, plus a similar amount for a pair of the brand’s PKAG3 Active 3D spex.