Unlike many ‘next big things’ in the world of multichannel audio, Dolby Atmos has gained sufficient traction with the public to go beyond a niche product and extend into price points that don’t require you to be a true ‘enthusiast’ to get on board. Even so, the speaker package you see here looks impressively cost effective. 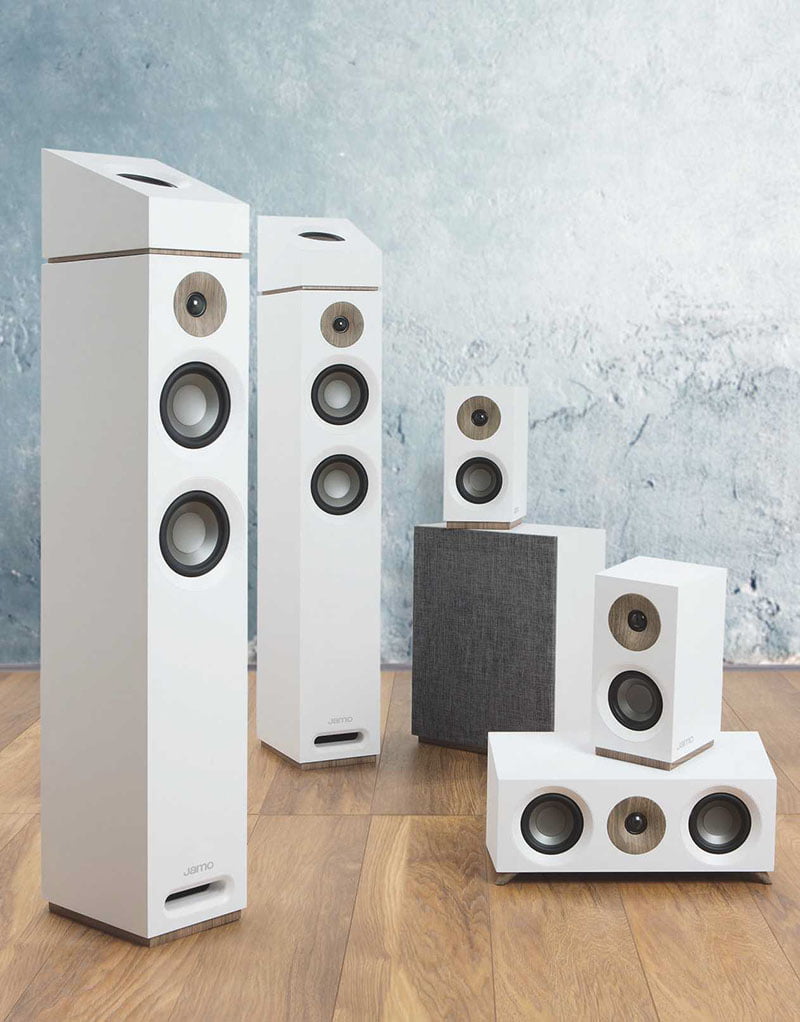 Jamo has been a strong player in affordable home cinema packages since the Pro-Logic days and is back in the UK via new distribution with Henley Audio (which also handles audio marques Klipsch, Musical Fidelity and Pro-Ject). First up are the 800 Series speakers – although other models will arrive in due course.

This is a ten-strong range which can be assembled a` la carte (more of which in a bit), but can also be bought in defined packages. This system uses the S 807 HCS package (5.0-channel), which features the S 807 floorstanders for front left/right, the S 801 standmounts as rears, and the S 81 CEN centre speaker. These five can be had for a seriously reasonable and get you up and running with multichannel.

You can then augment the package as you wish.

Most will plump for the S 808 SUB subwoofer, unless they already have a dedicated bass-maker they don’t want to replace. And then there are the S 8 ATM upward-firing Dolby Atmos speakers to get to a 5.1.2 system, taking the total to a still very competitive.

All models make use of midbass drivers hewn from a material that Jamo describes as Aluminized Polyfibre.

Exactly what the breakdown of metal to other materials is in this is something that the company doesn’t seem to want to be drawn on, but the result is a stiff and relatively substantial feeling unit.

All of the speakers use the same tweeter, however – a 1in soft dome design – and this will hopefully ensure a smooth handover between the various enclosures.

All the speakers have a slot port system to augment their bass response without generating too much unwanted noise. The S 807 uses a front-mounted port to allow for use closer to a wall.

The S 8 ATM reflective speaker at first looks like it’s typical of the breed. The design works on the angled upfiring principle that is part of the Dolby Atmos specification. There is, however, only a single driver in each speaker – an example of the 4in unit seen in the centre and surrounds – where other models (including PSB’s Imagine XA and KEF’s Q50A) feature dedicated tweeters. Jamo doesn’t quote a frequency response for the S 8 ATM but suggests it can handle the 100Hz and up requirements of Atmos.

More unusual is how the speaker connects. Instead of a pair of speaker terminals, the S 8 ATM instead slots into four sockets on the top of the S 807. You then make the speaker cable connection at the foot of that floorstanding speaker, rather than having to have a run of cable trailing most of the way up the back.

As a final welcome touch, Jamo has had the presence of mind to design the S Series grilles in such a way that they can be moved up to meet the angled

grille of the S 8 ATM, which makes for a much more streamlined aesthetic. It also makes most of its rivals – even ones at rather higher price points – seem a little ad hoc by comparison.

A caveat to this cable-decluttering installation method is that the only speakers in the S Series that have the special mounting connection and necessary speaker terminals are the two larger floorstanding models (the S 807 here and the costlier S 809), and the largest standmount (S 803), so if you want Atmos speakers at the rear of your room, you will need to change out the surround speakers too.

Considered next to the S 8 ATM, the S 808 SUB subwoofer is far more traditional, mounting an 8in woofer in the side of a narrow cabinet that contains a 100W Class D amp. Setup is limited to an LFE/line-level input, plus phase, crossover and volume controls. There’s no remote control.

The brand has a long history of making either extremely ugly or very attractive speakers, with little in between, and thankfully, the S Series is one of the latter. The styling is clean and modern and the sheen rather than high-gloss white finish (black and walnut are also available), combined with the grey cloth grilles, looks excellent.

They appear pricier than they actually are, and should work well in a variety of spaces.

All you Trekkies and TV addicts…

Connected to a Marantz SR6012 receiver, the first aspect of the Jamos’ performance that I clocked was their sensitivity. This system proved able to fill a relatively large space without any appreciable feeling of strain, which further aids their value proposition.

Such unforced headroom is immediately useful when you give the speakers a soundmix with real scale. The attack on the USS Franklin by Krall’s swarm ships, accompanied by the Beastie Boys, in Star Trek Beyond (Blu-ray, Dolby Atmos) is a sequence that the Jamos handle admirably. The dulcet tones of the New York rappers’ Sabotage are kept distinct from the rest of the mix, and there is an enjoyable feeling of immersion from the height channels as the wave of ships engulfs the Franklin. This is no less effective as the action moves into the station itself, with the system reminding you that you’re in an enclosed (if vast) space without it being overplayed.

A cohesive soundstage is maintained, with effects pans working well between the differing drivers of each speaker. And each model seems tonally even across its frequency range, and has a sufficiently wide dispersion that even with the front three enclosures spread fairly wide apart, you get a soundfield that extends well beyond the outer edge of the S 807 floorstanders.

This reflects well on the centre speaker in particular, as something this compact (it’s a very manageable 43cm wide by 18cm high) can struggle to achieve a creditable

sense ‘bridging’ the space between the front left and right channels.

The S 8 Series’ performance is also up to the job with the escape of Lorraine and Spyglass into the crowd in Atomic Blonde (Blu-ray, DTS:X). The voices and effects in the mass of people are shunted around effortlessly, with enough weight, high-frequency clarity and tonal realism to be convincing, adding to the experience rather than distracting from it. And with all seven channels in play, there’s a consistent feeling of control and precision to the soundfield, which keeps your attention focused on the screen.

Jamo’s height speakers do a good job of conveying the overhead audio during Atomic Blonde’s canopy-of- umbrellas moment and, once again, there is a very effective handover between the main speakers and their auxiliaries. There is also no overt lack of high-frequency energy from the upward-firing speakers, despite the omission of a tweeter. If you are looking for huge emphasis from your height channels – and I would argue that this would possibly be over-emphasis – these models might not be what you are looking for. Or, at least, you might want to consider using four of them. However, as a means of adding the headroom and three-dimensionality that a good object-based audio track can offer, they do a fine job for a very reasonable price.

In fact, my issues with this array, such as they are, stem largely from the other end of the spectrum. The S 808 SUB is encouragingly small and discrete for an LFE channel (and capable, the brand says, of being tucked under a sofa – albeit one with a 7in gap), but a basic lack of cubic capacity does rob it of both low-end extension and control, particularly if you are nudging the volume dial upwards. The interwoven 1980s soundtrack of Atomic Blonde is not a happy stomping ground for the S 808 SUB

Away from such rhythmically challenging material, there is enough low-end heft here to add scale to proceedings. The shootout in Jedha in Rogue One: A Star Wars Story (Blu-ray) is carried out atop a nice layer of low-end thuds and rumbles.

And in this sequence, what the Jamos do very well for relatively inexpensive speakers is ensure that fine detail isn’t subsumed by gunfire and explosions.

The sound of a crying child is picked out of the mix and positioned correctly, while the mechanical noises of the transporter are distinct and well defined. The larger size of the Jamo cabinets, compared to similarly priced sub/sat system rivals, means there’s a more relaxed and ultimately more cinematic presentation.

The price is right

That Jamo’s S Series 5.1.2 can do this while still retailing – and offering some scope for more advanced system building – is the really impressive part of this package. Had this been a range with the sort of appearance that forcefully suggested they might be best placed in a darkened cinema room,

I’d still consider it a worthwhile offering, but instead the S Series speakers marry a large scale (but not faultless) sonic delivery with attractive, well finished cabinets, and a slick integration of the height models that isn’t present even on considerably more expensive rivals.

As a result, this is a strong new arrival in the affordable full-size speaker market

The superb design (with installation flourishes) and price tag catch the eye, while the performance is strong - albeit with some LFE limitations.