Home » Here's How » How you can run XP FOREVER

How you can run XP FOREVER

Two months from now Microsoft will withdraw all support for Windows XP.
We explain how to keep XP running safely beyond that point
W indows XP is a fast,  dependable operating system  (os) that runs on a third of  the world’s PCs and is the  most popular operating system after  Windows 7. We know many readers still  love using it, but Microsoft is keen to end  the XP era and push us toward the radically  different Windows 8 age. In fact, it’s just  over two months until Microsoft withdraws  support for XP completely. 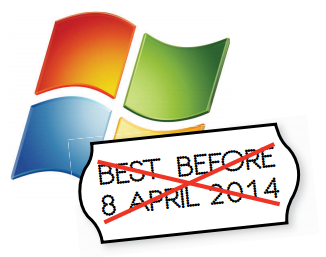 But many people feel pushed into buying  a new computer or replacing an OS that’s  familiar and does everything they need.
Resistance, therefore, runs deep and many  XP users insist they will continue to use it  long after the 8 April cut-off. It’s a brave  stand, but if you’re willing to ramp up your  computer’s defences and look after its  security yourself, you shouldn’t need to  wave goodbye to XP any time soon.
What happens when Microsoft  ends XP support? Search for anything XP-related on a  Microsoft website and you’ll see a stark  message warning that support for XP is  coming to an end and that it’s time to  choose a new PC or upgrade your current  one to Windows 8. Microsoft won’t actively  prevent you using XP, but  newer programs may not run on it.
If you’re determined to keep using XP, the  most important consideration is how you’ll  manage to keep it safe. Security experts  warn that hackers are likely to start  concerted attacks on XP computers as soon  as Microsoft’s support for it ends. Crucially,  Microsoft won’t issue any  more monthly patches to fix the security  flaws hackers uncover. Only businesses  with support contracts will receive  emergency updates if a serious  security flaw is found.
What should you do? If you’re still willing to persevere with XP,  the most secure option is to take it offline,  perhaps using it solely as a media server.
This means you’ll need a different PC  for web access. 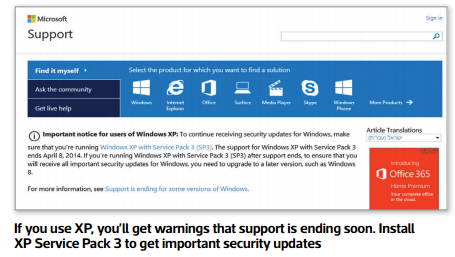 For now at least, antivirus companies are  continuing to cover XP. All the big-name  security brands, including Norton, AVG,  Avira and Kaspersky, include XP support in  the 2014 versions of their software. But it’s  more important than ever to make sure  your antivirus software is kept up to date.
If you aren’t already using XP SP3  (Service Pack 3) you should install it as soon  as possible from www.snipca.com/9981. If  you don’t install SP3, you won’t get  important security updates for your  computer as support for previous versions  of XP has already ended. SP3 is also useful  because it lets you run programs that might  not run on earlier versions. If you have a  64bit computer, you can only upgrade up to  XP SP2. This will also only be supported  until April 2014. To check which version of  XP you’re running, go to Start, My  Computer and right-click Properties. The  Service Pack version is shown beneath the  Windows version. If you use Internet  Explorer, download this along with the  security patches you’re offered.
You should also burn a copy of the  Service Pack to CD. This way, if you need to  reinstall Windows XP you won’t have to  depend on the download still being  available from the Microsoft website. 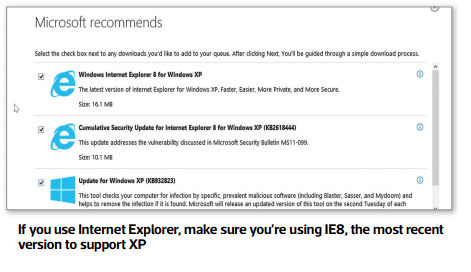 Label the SP3 disc and store it somewhere  safe. Another useful precaution is to make a  complete backup of your PC and create a  disk image. Use the free software  DriveImage XML (www.snipca.com/9989)  to create a backup of your system and burn  it to DVD. You’ll be able to use this like a  recovery disc to restore everything on your  Windows XP PC.
Bring your XP PC’s hardware  up to date You can easily and cheaply add several  useful technologies that have launched  since Microsoft releasedWindows XP.
As long as your PC has a PCI Express card  slot you can add USB 3.0 ports via an  add-in card. such as this model: www.
snipca.com/9987. USB 3.0 will make it  much faster to copy items to and from your  PC. Watch this video tutorial on how to  install the card (www.snipca.com/10071).
We also recommend buying a USB  SD card reader (such as this Kingston  model: www.snipca.com/ 10047) to import  photos from your camera dongle, and a  USB Bluetooth adaptor (such as these  Maplin models: www.snipca.com/10044) so  you can use a wireless keyboard and  mouse.
How to run Windows XP within  another operating system If you use Windows 7 Professional or  Ultimate, or Windows 8, you can run Windows XP programs in Windows  XP Mode. This is particularly useful  if you eventually switch operating system  but still want to use programs you couldn’t  otherwise run in Windows 7 or 8.
To do this, you’ll need to create a virtual  operating system on your PC.
And in Windows 7, you’ll need to use  the Hardware Virtualisation Tool in IE  (www.snipca.com/9986) to check  your computer supports hardware  virtualisation. If it does, download  Windows XP Mode for Windows  7 or 8 from www.snipca.com/9983.
Tick ‘WindowsXPMode_en-us.exe’ to install  the full version of XP. The exe file without  the N in its name doesn’t include Windows  Media Player. You’ll need to use Internet  Explorer for the download as your copy of  Windows first needs to be validated, and  you can only do this in IE. You must create  and validate a password for the XP Mode  installation and allow drive sharing (so you  can access your  documents and  programs). Once  XP is installed  you’ll see a  message that  Windows can’t find  any security  software. This  shouldn’t be a  problem as you’re  running XP from  within another,  protected version  of Windows.
However, we  recommend letting  Windows search for  and install any available updates. 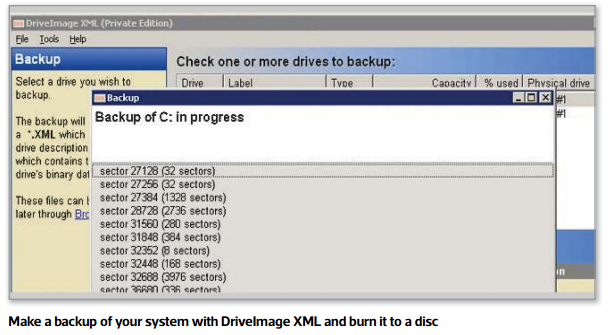 Windows XP Mode support will also end  in April, but because it runs as a virtual  computer it won’t be exposed  to the same security risks as it would  be if you were running XP as your  main operating system.
In Windows 7 and 8 you can also use  Compatibility Mode to run XP programs  and games. If a program fails to run,  right-click it, then click Properties,  Compatibility. Tick ‘Run this program in  compatibility mode for’, then click  Windows XP, Apply. If the program still  won’t run, choose a lower resolution in the  Compatibility settings menu. 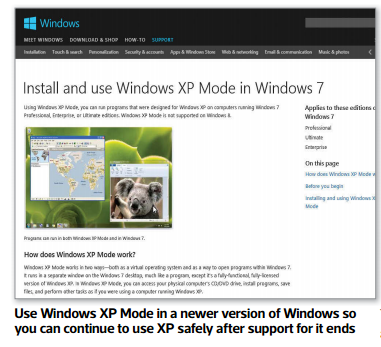 Dual-boot Windows XP If you dual-boot Windows XP using  the free program VirtualBox (www.
virtualbox.org), you’ll be able to run  it alongside Windows 7 or 8.
Once you’ve installed a copy of  VirtualBox, install XP on the virtual  computer using your Windows XP  installation disc, then install Service  Pack 3 from the Microsoft website  (www.snipca.com/9981).
If you don’t have an XP installation  disc you can instead download XP  from www.modern.ie. Click Test  Across Browsers, then ‘Get free VMs’.
Click Windows, ‘VirtualBox on  Windows’ then double-click the  ‘WindowsVirtualBox.exe’ link in the  ‘IE8 – XP’ section. In VirtualBox, click File,  Import Appliance, Open Appliance. 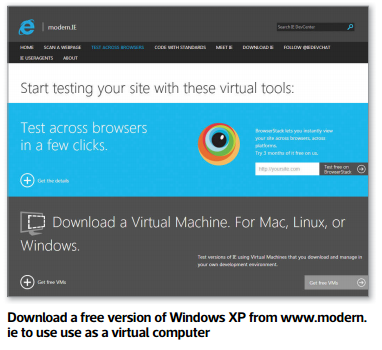 Double-click the file that’s extracted  and the virtual machine will be created  and ready to use.