Home » Projectors » HOW TO CHOOSE A PROJECTION SCREEN
Projectors

HOW TO CHOOSE A PROJECTION SCREEN

40 Views 0
During the design process for a home theatre, the imaging system needs to be optimised for the best image performance possible. The projection screen is key to this equation, an important part of the overall projection solution which involves a combination of the projector, the screen and the room itself. It is too often the case that the screen becomes a secondary or even tertiary consideration, its value in the system determined by its cost versus that of the projector. Since the projector has all of the tech and the screen is nothing more than a piece of fabric stretched into a frame, then the screen should be only a fraction of the cost of the projector, right?
Paul Kutcher 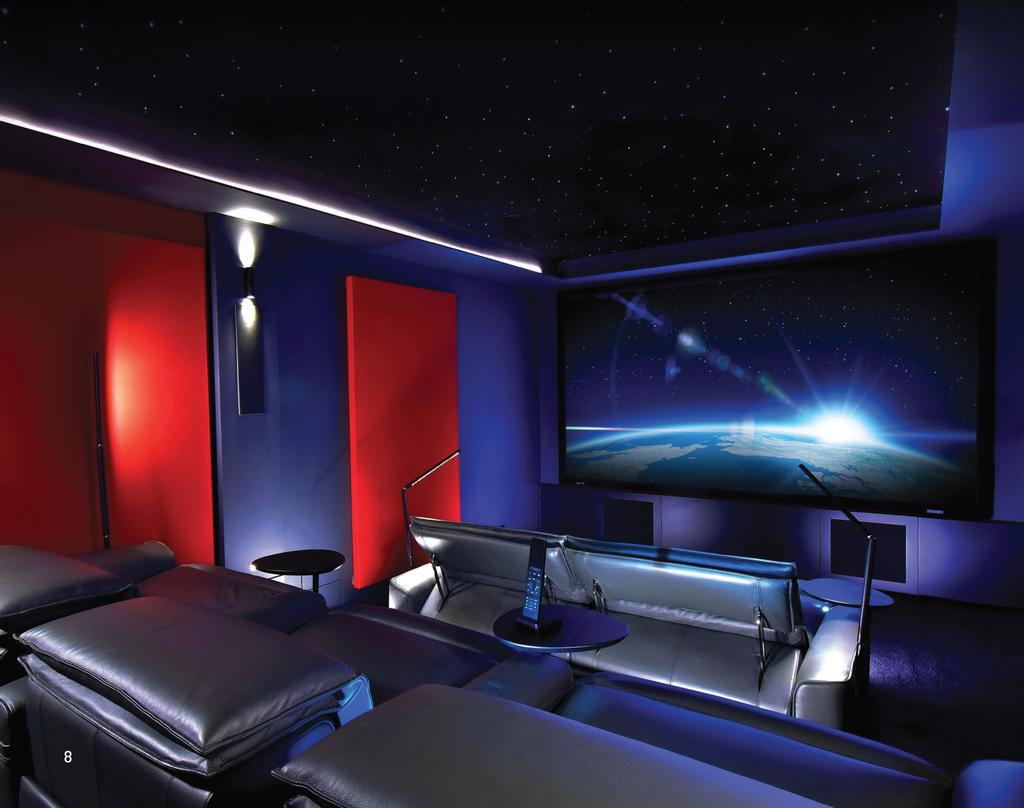 This attitude is highly prevalent, but it is very wrong. Projectors are indeed packed with technology, and yes, there are screens that are nothing more than fabric stretched into a frame. But the role played by the projection screen is absolutely critical in determining the final picture outcome.

Poor screen selection will display an image well short of optimal. It can remove the enjoyment and excitement of the cinematic experience — the ‘wow’ factor. So when going through the design and equipment selection process, pay particular attention to the item often given the least thought and respect: the projection screen.

The case for gain

First and foremost, it needs to be remembered that projection screens are passive devices. They cannot amplify light to make it brighter, but they can be engineered to have specific optical properties which redirect the available light in a preferential dispersion pattern. Optical elements in the screen can provide specific traits or be tinted to enhance performance in certain conditions.

So while a screen doesn’t amplify light, a high-quality screen is able to enhance the image by compensating for a projector’s weaknesses, and by ensuring that room artefacts are minimised in the displayed image.

Poor screen selection will display an image well short of optimal. It can remove the enjoyment and excitement of the cinematic experience — the ‘wow’ factor.

One common specification of projection screens is their gain, a measure of how bright the surface is compared to a reference standard of magnesium carbonate, a white chalky substance that is specified as having a gain of 1.0. Magnesium carbonate is called a ‘Lambertian diffuser’ because all light falling upon it will be reflected in an equal pattern in all directions — from wherever you view this illuminated surface relative to the light source, the brightness will remain the same. For all intents and purposes, matte white screens approach this ‘ideal’, though there are only a few surfaces that are considered true reference Lambertian surfaces. (See Figure 1 above.)

The downside with matte white screens is that although they are very uniform in their reflectivity, that greatest strength is also their greatest weakness. Their uniform diffusion will also reflect any ambient room light, and this unwanted cross-reflection light on the screen surface has the detrimental trait of reducing image contrast, which can result in images that look washed out and devoid of ‘pop’.

By adding a degree of gain to the screen, so making the screen brighter, the effects of cross reflections can be reduced. How do screens do this when, as we mentioned above, screens are passive devices that are unable to amplify light? Well, there are indeed no free lunches with screens, but one specification can be increased alongside a decrease in another. In the case of adding gain to a screen to make it brighter, we reduce its uniformity, so that it redirects light in a preferential pattern — that is, we make the screen more directional. This decrease in uniformity directs more of the projected light into the viewing area, and away from the side walls. Cross-reflected light will also be reflected across the screen based upon its gain characteristics, rather than back into the viewing area.

So not only do we now have a brighter image, we have also mitigated some of the cross-reflection issues — see Figure 2. Be aware that in this illustration the dispersion pattern applies in both the vertical and horizontal planes based upon the angle of the projected light.

However, as we increase the screen gain, we also need to ensure that the projector’s optics are a suitable match for the increased gain. Should the projector’s optics be too short for the gain of the surface, there will be visible ‘hotspotting’ on the screen. Hotspotting is an artefact where a part of the image is brighter than the area around it. This hotspot will follow you around the room dependent upon the direction of the projected light. It is therefore important to match the screen gain with the optics of the projector to avoid hotspotting. All good screen manufacturers will provide gain charts for their surfaces outlining not only the dispersion angle of their surfaces, but also a recommended minimum throw ratio for the surface in question. The minimum throw ratio is typically based upon the image width. 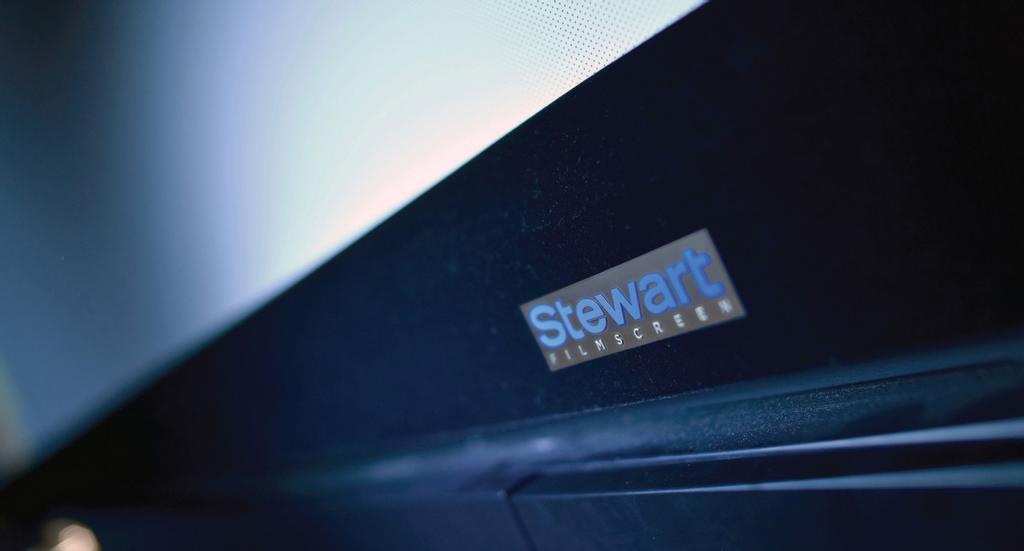 Another benefit of having a brighter screen surface is that it will assist when projecting HDR images. It is much more difficult to achieve high on-screen brightness in a typical home theatre than it is with a flat-panel television. While there are high-end projectors that certainly can achieve sufficient brightness in a home theatre environment, the majority of home theatre projectors simply lack the brightness to compete in this regard with a TV. A projection screen with increased gain will assist in increasing the on-screen brightness to compensate for this.

There are also relatively rare occasions when there is too much brightness on a screen. In these cases, a screen having a lower gain is able to reduce this brightness. Screens having a gain lower than 1.0 will typically have a grey base, which lowers the black floor of the projection system and shifts the grey scale down, reducing image brightness according to the screen gain.

A high-quality screen is able to enhance the image by compensating for a projector’s weaknesses, and by ensuring that room artefacts are minimised in the displayed image.

For example, Stewart Filmscreen’s Snomatte/StudioTek 100 is considered the reference matte white screen for postproduction and colour grading applications. It is a Lambertian surface that offers a near totally uniform image across the entire screen surface. It has a peak gain of 1.0 and never approaches half gain.

But Stewart also has a grey Lambertian surface, GrayMatte 70, which has a peak gain of 0.7; it features the same Lambertian characteristics as Snomatte 100 but at a lower brightness point. We have deployed GrayMatte 70 in a few home theatres where short optics have been used to achieve a larger image size for the space. The GrayMatte surface then produces a uniform image while offering a degree of ambient light resistance as the grey base assists with absorbing room cross reflections.

Speaking of grey screens, why? Grey screens were originally developed for the home theatre market 20 years ago to compensate for what was then low-contrast performance in lamp-based projectors, though the technology had also been used decades earlier in commercial applications. While the contrast performance of projectors has dramatically improved since then, grey screens offered another side benefit: they are better at maintaining image contrast with ambient light present. How do they do this? As mentioned, a grey base lowers the black floor of the projection system, thus improving black levels. By adding gain elements to the surface to increase brightness, we make the surface more directional, thus focusing more of the projected light into the viewing space while cross reflections will be shed across the screen surface where they have less of an impact on the image as viewed from the audience.

The information here only touches on the considerations needed in the decision-making process for selecting the most suitable projection screen for a home theatre. But the most critical takeaway is to give the projection surface its due in the first place. Considering the screen’s role as part of the overall projection solution, not as a standalone afterthought, will will go a long way to ensuring that you enjoy the best results of which your projector is capable, and the best possible image in your theatre.