Bringing portable sensibilities to home headphone listening, the difference with this model is clear to hear. Read our Focal Clear Review. 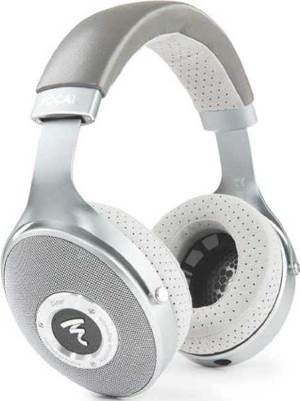 The construction of the Clear headphone is fairly conventional judged by some of the more elaborately styled competition, but thanks to some careful attention to detail, the result is a pleasantly comfortable headphone that’s suitable for longer listening sessions. Its weight is well distributed across the headband, which is nicely padded. The driver housings should be large enough to completely enclose most user’s ears and the level of pressure that’s applied to the sides of the head is well judged, although the design isn’t as flexible as some when it comes to moving around while wearing it. The Clear does without any form of hinging to the driver housings and relies on the travel in the earpad cushions to achieve a good fit on the head. This works fairly well, but does mean that some rival designs here are marginally better for overall long-term comfort.

As one of the most successful new headphone companies (a relative term given its has been building models for almost a decade), Focal has a comprehensive range of models for all needs. The Clear is the latest and sits between the Elear and the flagship Utopia. Its open-back design is a further development of that used in the Elear, and the hope is that the listener will completely forget they are wearing it.

Internally, the Clear uses a pair of 40mm dynamic drivers, which are made from an aluminium/magnesium alloy. These have a patented ‘M Profile’ that is intended to increase the stiffness of the driver, which Focal says maintains the dynamics and fidelity of the recording. Each driver is backed up with a 25mm voice coil and sits inside a metal cage-style enclosure with a mesh back. The padding is reasonably deep and covered in a microfibre-style material with perforations for improved breathing.

The most peculiar aspect of the Clear’s design – given that it is open backed and so prone to leaking an unsuitable amount of noise to consider using in public – is the effort that has gone into making it work with portable devices. The impedance has been kept to 55 ohm and it comes with both short and long cables to make hook-up easier. You also get a hard shell carry case, which is a nice piece of industrial design. Build quality is superb and there’s a very real sense that high-quality materials and workmanship have been employed in the headphone’s construction.

Interestingly, despite Focal’s claims of ease of drive, the Clear doesn’t seem to need a lower volume setting to hit the test level than the other designs here. Where Focal has achieved its

design aims is the way that the Clear feels like a pair of drivers in free space. There is little sense of congestion to the opening of Burn The Witch and the track proceeds with a scale that helps it sound convincing. There is plenty of low-end weight too, which is combined with a propulsive energy that makes this an engaging performer.

The sense of space really comes into its own with Stimela. The Focal creates a completely believable and effortlessly open portrayal of Hugh Masekela and his supporting musicians. The affirmations of the various audience members as different countries are mentioned is clear and their placement relative to the performers is completely believable. The dynamic spike of the train whistle is handled beautifully and the same rhythmic energy is present here, too.

The performance of Take Five isn’t quite so assured, however. The guitar is slightly subsumed by the vocals and where some models here manage to take the opening vocals – which are almost exclusively in the left channel – and create a sense of them in the right, the Clear keeps them separate.

With the more forceful environment of Beat It, it regains its composure.

The bass it finds in the recording is deep and has a real snap and vigour to it. Jackson’s vocals are delivered with enough of a sense of sweetness to be something you would want to listen to long term without losing any of the drive and aggression in the recording itself. The Clear also does a very good job of picking out the little details from the backing vocalists and working them into the mix