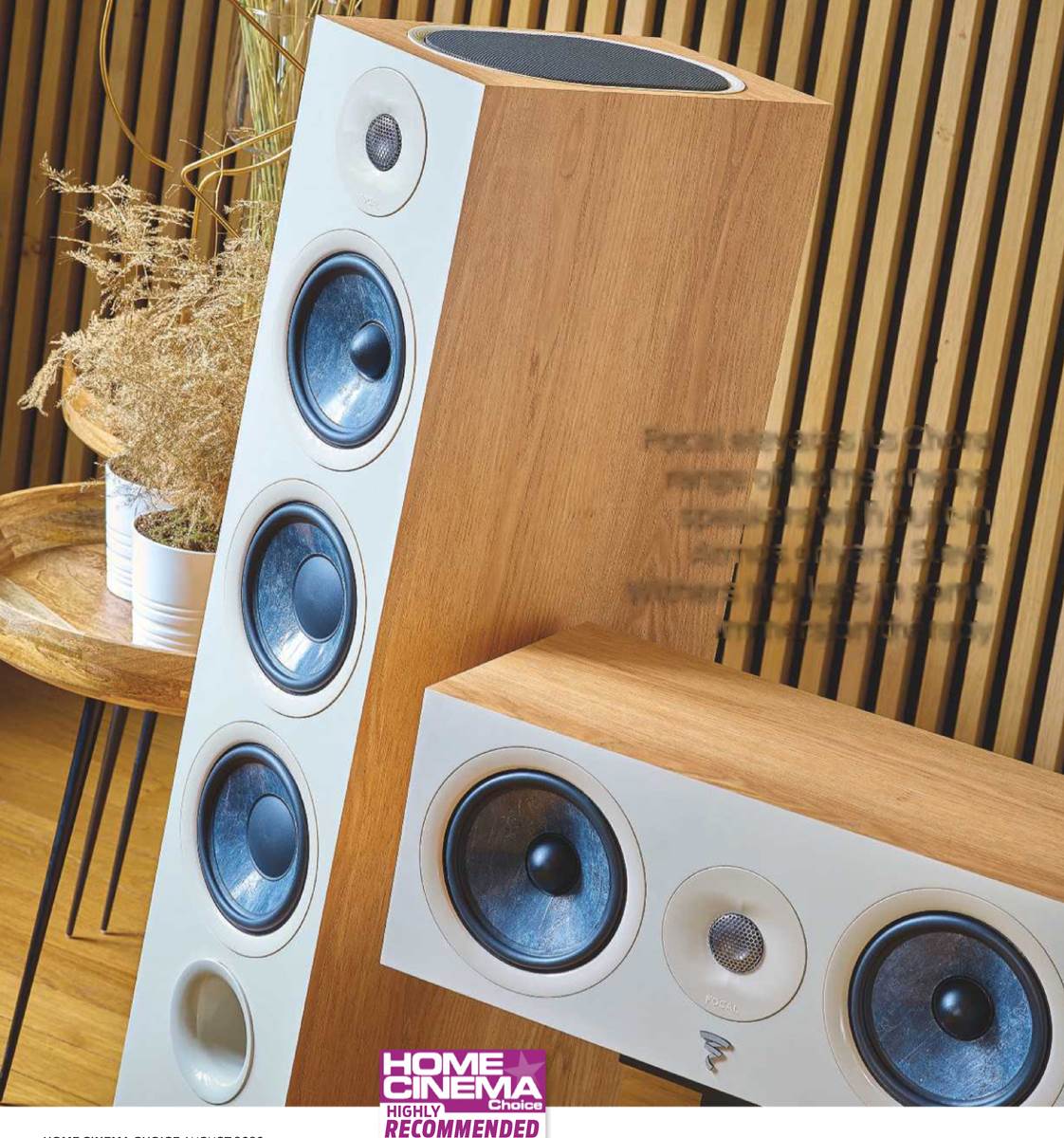 Focal’s recently launched Chora range offers plenty of home cinema options, but with the addition of the new 826-D floorstander the company has taken its performance to another level… literally.

The reason for this sonic elevation (and the model number’s suffix) is the Dolby Atmos-certified reflective speaker incorporated into the floorstander – a first for the French manufacturer. This full-range upward-firing driver is located in the top (natch), adding a vertical dimension to the soundstage and allowing for Dolby Atmos (and DTS:X) object-based immersion.

Atmos wizardry aside, the 826-D is identical to the existing flagship floorstander in the Chora series, with a design that boasts plenty of Gallic flair. Focal has taken aesthetic cues from its high-end Kanta range, with a bolt-on plinth that not only provides support but also tilts the speaker for improved time alignment. There’s a distinctive two-tone look, and the option of light wood, dark wood or black finishes. But whichever you choose.

You get a lot for your hard-earned readies: a 1in aluminium/magnesium inverted-dome tweeter (behind a perforated protective cover), a 6.5in Slatefiber midrange driver and two 6.5in Slatefiber woofers in a three-way configuration, with crossovers at 270Hz and 2,700Hz. There’s a magnetic fabric grille to cover the midrange and woofers, and a bass port near the bottom, resulting in a claimed frequency reach down to 48Hz.

The Dolby Atmos speaker is a 5in full-range coaxial driver with Slatefiber cone and Al/Mg tweeter. This is housed in a directional baffle designed to fire sounds – creating the illusion of overhead channels. This driver also gets a magnetic fabric grille that matches the one on the front, and there are two sets of high-quality binding posts at the rear – one for each speaker.

The rest of the Chora lineup includes the non-Atmos 826 and 816 floorstanders, and 806 bookshelf speaker. For home cinema setups there’s also the CC800 centre speaker, which uses dual 6.5in Slatefiber midbass units either side of its tweeter. The centre speaker comes with a base for tilting, and offers the same choice of finishes as the rest of the range. Oddly, it’s supplied with separate round grilles for each midbass.

Finally there’s the SR800 surround speaker, which you can use for side or back channels. This slim, wall-mounted model comes with a bracket for quick and easy installation, and has a more austere matte black finish that’s intended to blend seamlessly into darkened movie dens. It uses the same 6.5in Slatefiber midrange and Al/Mg tweeter as the other speakers in the lineup.

At this point you might be thinking, ‘What the hell is Slatefiber?’ Well, according to Focal it’s a composite cone material combining thermoplastic polymer

with recycled non-woven carbon fibres, and provides the optimal balance between damping, rigidity and lightness. So now you know.

The system reviewed here uses a pair of 826-Ds, a CC800, and a pair of SR800s. The floorstanders deliver a decent bass response, but a SUB 1000F shoulders the heavy lifting at the low-end. This sealed unit is one of Focal’s larger subs, claiming to drop below 24Hz thanks to a forward-firing 12in Flax woofer with dual magnet system and 1,000W of BASH amplification. Note that it’s not a Chora-specific model, and is only available in a (gorgeous, two-tone) black finish.

While the front three speakers might be aimed at home cinemas, they’ll fit easily into most spaces thanks to their immaculate finish, and are so glam you might consider removing the grilles.

The sound of music

To kick things off I popped on the 4K disc of La La Land with its jazzy Dolby Atmos track, and this Chora system revealed an effortless musicality that perfectly embodied the film’s opening number set on a gridlocked Los Angeles freeway. The front three speakers produced a dynamic and expansive soundstage, with some impressively wide dispersion from the floorstanders, and clear and focused dialogue from the centre.

There’s a lightness of touch to these speakers that rendered all the high-frequency detail in the recording, while the system worked as a single cohesive unit, giving the music a frenetic energy and bubbly sensibility.

The surrounds jumped in as the camera weaved between the cars and honking horns punctuated the music, while a band in the back of a van provided some up-tempo drums that the floorstanders and sub delivered with a strong percussive beat.

As enjoyable as La La Land is, the film doesn’t offer much in the way of overhead attack.

If that’s what you’re 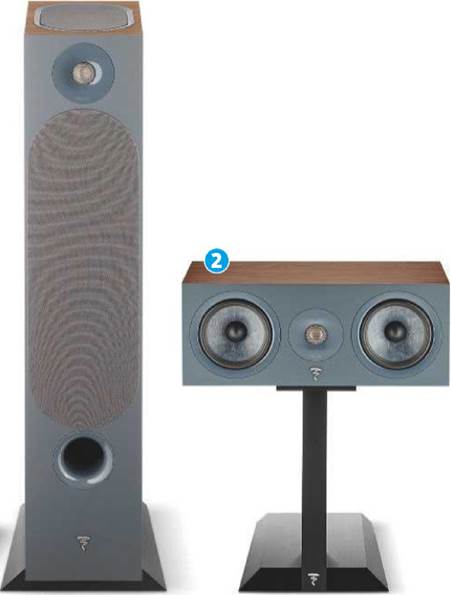 Towards the lower end of the Focal range

1. The 826-Ds are Focal’s first floorstanders with in-built Atmos drivers upwards, off the ceiling and down towards the listener

2. The same 6.5in midbass units are used on the Chora floorstander, centre and surround models 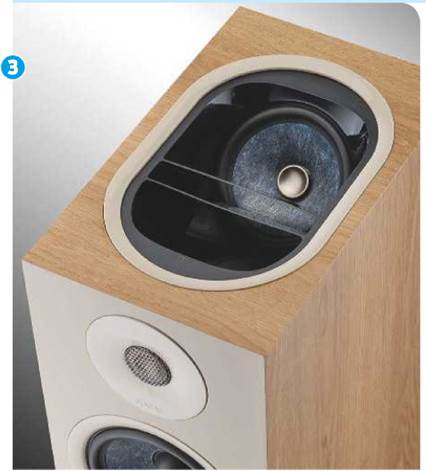 after, the opening of John Wick: Chapter 3 (UHD BD) is sure to please. The New York streets are pounded by a powerful storm, and as thunder rolled overhead and rainfall drenched everything, I felt as cold and wet as Wick himself. With identical drivers all around, the soundfield enjoyed a nice tonal balance.

The 826-D’s upward-firing drivers proved capable of creating the illusion of overhead channels, but the effectiveness will depend on the type of ceiling in your room. The lower, flatter and more reflective, the better. This technology is a compromise, but it’s considerably less intrusive than cutting holes in your ceiling, and the built-in nature of the upfiring driver is an elegant solution.

The climactic showdown at The Continental let this 5.1.2 package strut its stuff, and with good amp power behind it (Arcam’s AVR30 – see p42), it really started to open up. Bullets ricocheted around the room, a clear echo came from the expansive hotel lobby above, and the subwoofer dug deep, giving shotgun blasts a physical impact. The scene is a joyous paean to ballistic carnage, and the enthusiastic, energetic delivery of the Chora system is sure to put a smile on your face.

This was well demonstrated during the opening credits, as our heroes dispatched swarms of undead to the strains of Metallica’s thrash-classic Master of Puppets. The mix syncs its action to the music, revealing a tight and controlled performance from Focal’s muscular sealed sub.

This scene revealed the only fault I can really level at this system, which is that it comes alive at higher volumes. If you turn the dial too low, the sense of space and detail can diminish slightly. But any excuse to bring the noise…

At the end of the movie, the hippy enclave of Babylon is besieged by an army of (relatively) intelligent zombies nicknamed ’T-800s’. The 826-D’s integrated height channels extended the soundstage above the listening position, particularly when defenders dropped appliances from the roof of a tower block. The overheads also blended well with the surrounds as an oil tank explodes, engulfing our heroes in flames. However, a 5.1.2 system has its limitations, which is the front-heavy nature of the top channels. If I was putting together a package, and had the necessary budget, a second pair of 826-Ds on surround duties would add two more Atmos drivers at the rear and further balance out the overall bass response.

The Chora series sits towards the lower end of Focal’s speaker range, but you wouldn’t think that from looking at and listening to these cabinets. They balance technical prowess with an elegant charm, producing an outstanding multichannel performance that adds impactful overhead effects to a cohesive, balanced and enveloping soundstage with high-frequency sweetness and impressive lows. The result is an accomplished all-round cinema setup

This elegant and accomplished set of speakers adds Gallic style, Atmos immersion and a barnstorming performance to any aspiring home cinema.

See deal
Audio Advice
Last Amazon price update was: October 25, 2021 1:40 pm
× Product prices and availability are accurate as of the date/time indicated and are subject to change. Any price and availability information displayed on Amazon.com (Amazon.in, Amazon.co.uk, Amazon.de, etc) at the time of purchase will apply to the purchase of this product.
MORE

3. Atmos sonics are delivered by a coaxial midbass/tweeter unit

NAD T 778: This seven­channel Dirac-equipped AVR jettisons the traditional LCD display panel in favour of a touchscreen colour UI to get the best from its BluOS streaming platform. Almost as stylish as Focal’s speakers… 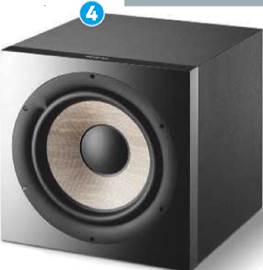