US audio brand Emotiva set itself the laudable goal of building high-end products ‘at prices that more people could afford’. It aims to achieve this by keeping operations lean and focusing on relatively few product lines, and using a modular approach that lends itself to certain economies of scale. It also designs and assembles its entire range in its homeland – something of a rarity these days.

Its third-generation XPA-11 is the perfect example of this ethos, using a modular design to create a multichannel power amplifier that can drive eleven speakers simultaneously. Best of all, it achieves this feat while maintaining a keen price point. The XPA-11 Gen3 can be considered ‘affordable’, and the cheapest option in an admittedly limited segment of the market.

Why there are so few single-unit 11-channel power amplifiers available to buy is a mystery to me. In the 3D sound era, eleven channels is the minimum required for a genuinely immersive 7.1.4- or 5.1.6-channel setup.

and while you could use multiple power amps to drive your system, mixing the two-, four-, five- and seven­channel options that are more widespread, most people will prefer to keep the number of boxes in their rack to a minimum.

Of course, if space is a premium, there are numerous 11-channel AV receivers available, where processing and amplification is handled in a single unit. However, using a separate processor and dedicated amplification pays dividends, especially when it comes to power and headroom. And thanks to Emotiva’s inventive power supply, the XPA-11 can deliver plenty of both from a single chassis.

The XPA range uses a modular architecture, with the same heavy-duty steel chassis on the outside and a choice of customisable amplifier modules on the inside. You can choose the number of modules you need when first purchasing your XPA amp, but also add more later by sending it off to Emotiva for an upgrade.

The chassis houses the power supply, the protection and control circuitry, and Class AB amplifier modules. There’s a basic 300W mono module and a 2 x 65W stereo module, and room for between two and seven in total. These slot in at the rear, and there are status LEDs on the front for each one, along with a large illuminated standby power button.

A single chassis can be configured with anything from one channel at 600W to fourteen channels at 65 watts each, allowing you to gradually upgrade your amplifier as you expand your system. The XPA-11 uses three mono and four stereo modules, delivering 300W (8 ohm) or 550W (4 ohm) into each of the front three channels, and 65W (8 ohm) or 100W (4 ohm) into the others.

1. Each of the seven LEDs corresponds to one of the XPA-11’s amplifier modules

Such a configuration makes sense as the front three channels are critical for music, as well as creating a solid LCR soundstage with clear dialogue. The remaining eight channels handle surround and overhead or height speakers. Each channel of amplification employs a fully analogue Class AB output stage originally developed for Emotiva’s first- and second-generation XPA devices.

Aside from the modular design, Emotiva’s other major innovation relates to the power supply. The XPA-11 uses a high current, switch mode power supply (SMPS) that, says the company, allows for substantial long-term power capacity and significant short-term dynamic power reserves. It also reduces the weight of the amp by 30 per cent, making installation easier on the back/rack, and runs cool.

Additionally, Emotiva’s ‘Soft-Switch’ Class H power supply topology works to boost overall efficiency. A lower supply voltage is deployed at low power levels, but when more power is demanded, the XPA-11 switches to a higher voltage rail. This is a similar method to the Class G amplification Arcam uses on its amplifiers and AVRs.

The chassis itself is extremely well made, with a heavy steel construction and a brushed aluminium faceplate; the XPA-11 is ruggedly good-looking for a power amp. The status LEDs, if found distracting, can be turned off by a button on the rear, but not the illuminated power button.

Also on the rear are all connections, with eleven sets of unbalanced phono and balanced XLR inputs. There are also independent switches for each of the seven modules, allowing you to choose between the phono and XLR hookups, plus remote input and output triggers, allowing the XPA-11 to control and be controlled by other trigger- enabled equipment.

If you’ve been raised on a steady diet of misleading power numbers from amp manufacturers, the XPA-ll’s specs might seem underwhelming. However, in use it’s apparent Emotiva is likely conservative (or honest) in its measurements, and the switching power supply provides plentiful grunt to drive my 4 ohm/8 ohm combi setup. 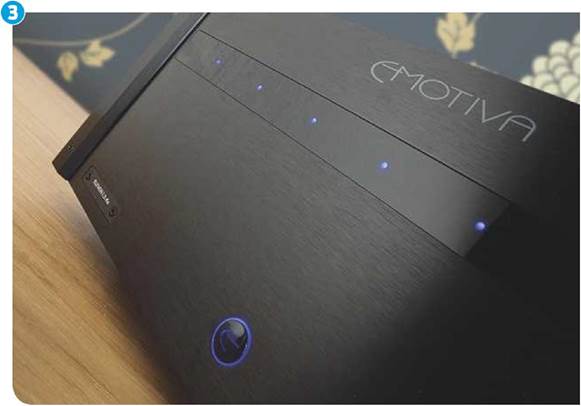 My previous system was based around the seven-channel Arcam AVR850 receiver and P429 four-channel power amp, so I was able to compare Emotiva’s Class H to Arcam’s Class G. The two are closely related, and share the same levels of power and transparency. However the XPA-11 seemed more exciting in its delivery, with a greater sense of dynamism and attack.

I popped on the Blu-ray of Amused to Death by Roger Waters. This reissue of the 1992 album includes a 24-bit/96kHz stereo version with exceptional detail ‘Emotiva’s XPA-11 has power in spades. You won’t get better multichannel bang for your hard-earned buck’ and dynamics. The XPA-11 loved the complex mix, with the sounds of monkeys erupting at the start of What God Wants, before the driving drum beat kicks in and Jeff Beck’s guitar dances its way across the front of the room.

The same Blu-ray includes a high-resolution 5.1 version of the album, allowing the amplifier to stretch its muscles and fill the soundstage with a fantastically immersive lossless surround mix. The XPA-11 delivers tight bass and a treble that’s clean and free of congestion. The dynamic range is remarkable, with the explosion in Late Home Tonight helping to clear my eardrums. The amp also turns on a dime, as evidenced by the sudden silence that follows the blast.

This dynamic and exciting performance led me to the DTS-HD MA 7.1 soundmix of Edge of Tomorrow (Blu-ray). The (initial) beach landing sequence uses every available channel to cocoon you in the chaos of the assault, and the XPA-11 rises to the challenge. The fuselage of the dropship buckles and creaks, and missiles shriek from speaker to speaker with power and accuracy. The delivery is effortless, and the added headroom means you can push the volume without it ever sounding strained. It can also retrieve every detail in a sound design so overblown it could easily collapse into a painful cacophony. Edge of Tomorrow’s different types of 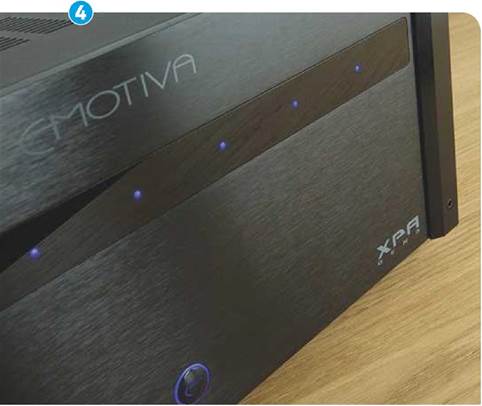 ordinance are clearly defined, as are voices and dialogue despite the fog of war.

Skilful handling of two-, five- and seven-channel soundtracks is great news, but isn’t the main reason for buying the XPA-11. Its potential to drive a full 7.1.4 system is what marks it out from the competition, so I turned to the 4K disc and Atmos soundtrack of Le Mans ’66; a mix about as subtle as a Ford GT40 and one that fits the Emotiva’s muscular performance. Racing sequences are dominated by the sounds of roaring engines, which the XPA-11 reproduces with a driving intensity. As race cars tear across the room, from side-to-side and front-to- back, the sounds move from speaker-to-speaker the a forceful precision.

In the interests of being format agnostic, I also watched Jumanji: The Next Level, with its freshly minted DTS:X soundtrack. Once again the XPA-11 sets out its stall from the beginning, with the pounding drums that announce a new challenge in the game reverberating around my cinema. At one point a charging herd of ostriches surround our heroes, and the noise of their jostling bodies sounds so big in the side and rear speakers, you’ll feel you’re about to get crushed.

The beauty of the XPA-11 is that it produces the power where it’s needed, rising to the demands of a soundtrack without missing a beat – or explosion. It’s perhaps not the most refined amplifier ever made, but, like customised American muscle cars, that’s rather missing the point.

The Emotiva has power in spades, and can drive the most demanding of systems, but in amongst all that brawn is a balanced sound that’s tight and responsive and really impresses. The fact it’s also well engineered, solidly built and competitively priced is the icing on a perfectly machined aluminium cake. You simply won’t get better multichannel bang for your hard-earned buck

2. Inputs can be switched between unbalanced phono and balanced XLR

3. You can dim the status LEDs-but not the power light

EMOTIVA XMC-2: Okay, this Dolby Atmos/ DTS:X processor offers a 16-channel (for 9.1.6) output, and may have you wanting to add even more power to the XPA-11, but it’s an obvious (and aesthetically matched) partner.