Adjustable mice can be very hit or miss when it comes to ergonomics and comfort, but that hasn’t prevented Cougar from deciding to allow its flagship gaming mouse, the Cougar 700M, to offer a modicum of adjustable surfaces. 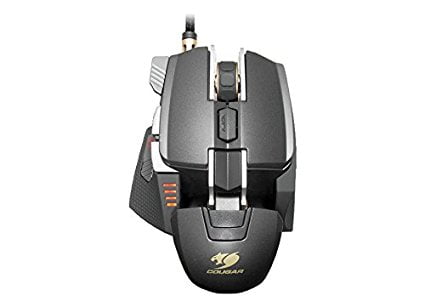 The Cougar 700M isn’t as adjustable as some mice we’ve seen, though, such as those from MadCatz’s R.A.T series. Only its palm rest can be moved, via the built-in adjustment screw, but Cougar includes an alternative rest, so whether you’re small or big-palmed, or use a palm grip or claw grip, you should be able to move the palm rest up or down to roughly suit your needs.

That said, the mouse is quite flat, and the wrist rest only raises from the tail edge, so it’s more suited to fingertip and claw-grip users than Logitech’s G402, for example. The latter is predominantly a palm-grip mouse thanks to its high arching back – a feature that’s entirely absent on the Cougar 700M. It’s comfortable in the other two grip styles, though, and it’s also solid and well made, although a couple of the edges could be rounded off a little better.There’s a plethora of programmable buttons too – eight in total, including a sniper-mode thumb button that momentarily reduces the sensitivity so you can get an accurate headshot. There are also two standard thumb buttons, a scroll wheel button and a further small button to the side of the left mouse button. The DPI button only allows for cycling the sensitivity one way, though, rather than the up or down cycling you can do on the G402 and most of Corsair’s mice.

On the plus side, there’s a great software package available from Cougar’s website, which provides the ability to set the four dpi levels between 50 and 8,200dpi in 50dpi increments. You’re also able to set the sniper button’s resolution, with independent X and Y axis control for all these settings. You can also create profiles based on specific games and record macros, as well as custom key assignments to launch programs or control media.Using the Cougar 700M is thankfully a very positive experience. The ADNS-9800 laser sensor offers a smooth movement that complements the mouse’s weight and friction. It isn’t a light mouse, though, weighing in at 130g, and that’s without its four optional 3.5g weights that slot into a pull-out container at the top, so it’s already noticeably heavier than the 108g Logitech G402.

Meanwhile, the side sections sport a honeycomb inset texture to improve grip and help prevent sweaty fingers, while the palm rest and finger buttons are also slightly textured. Finally, an LED at the front of the mouse can be set to change color based on the selected profile, although it’s tricky to see in daylight.

The Cougar 700M offers excellent customization software, it’s relatively comfortable to use and has loads of buttons. It’s also solid and well-made, although it isn’t the best option for palm-grip users. Its weight makes it feel solid under your hand too, although that’s a matter of personal taste. If you like a heavy mouse, though, and you prefer a claw-grip or fingertip play style, the Cougar 700M offers a customizable, well-made mouse that’s a pleasure to use.

A good choice for fingertip and claw-grip users, and it includes an extensive feature set and a genuinely useful software suite. Extras Additional palm rest, weights