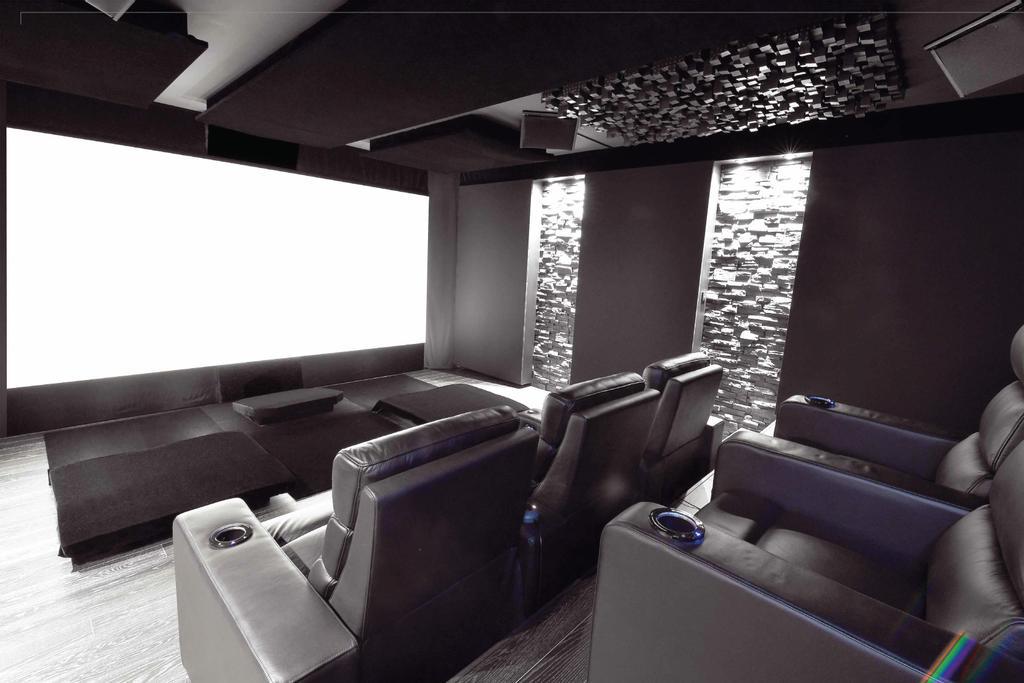 I visit my host near Hanover, who welcomes me in good spirits at summer temperatures. To refresh me, I have a cold drink. In the generously sized and well-air-conditioned living room, which is quite comfortably furnished in Italian style, I learn what to expect in the next few hours.

„The cinema room should be equally suitable for watching movies and listening to music,“ my host explains. „For feature films, however, my priority tends to be the picture. Exceptions are concerts and music films. For stereo music listening, of course, only the sound counts.“ I look around. To my surprise, nothing in the house reminds me of the hobby. No movie posters, replicas, vintage products provide a clue to a cinema. It seems to be clandestine. „Would you like to see Cinema Incognito?“ my host asks me. „Of course,“ I answer with anticipation and am led to an inconspicuous white door. It is the entrance that leads directly from the living room. Behind it, completely incognito, is the all-black home theater – what a contrast to the white interior of the living room.

Behind the white-painted entrance door, a little distance away is a second door. As in many commercial cinemas, this airlock, including a double door, serves mainly for sound insulation so that the sound does not boom through the whole house. The second door also has another purpose: it contains a loudspeaker. 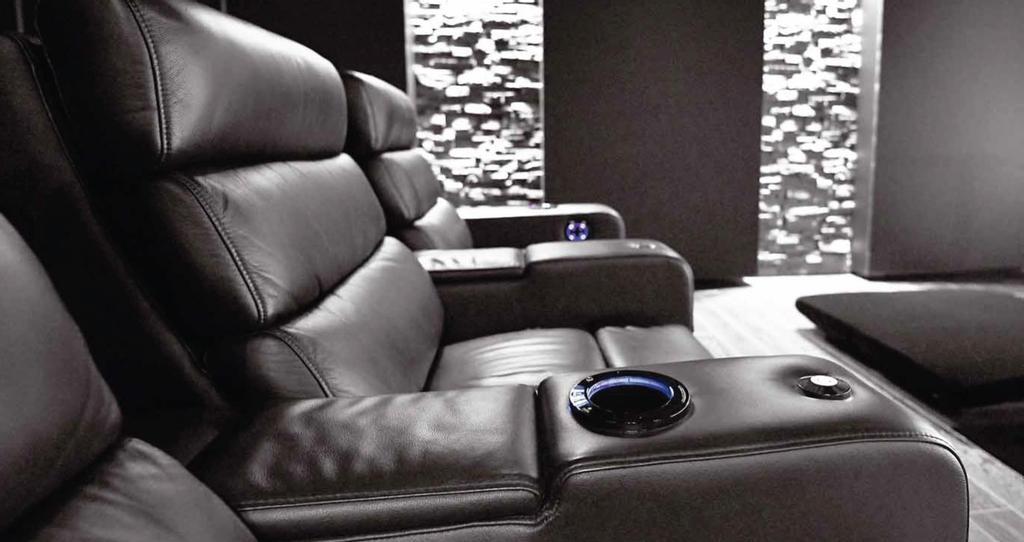 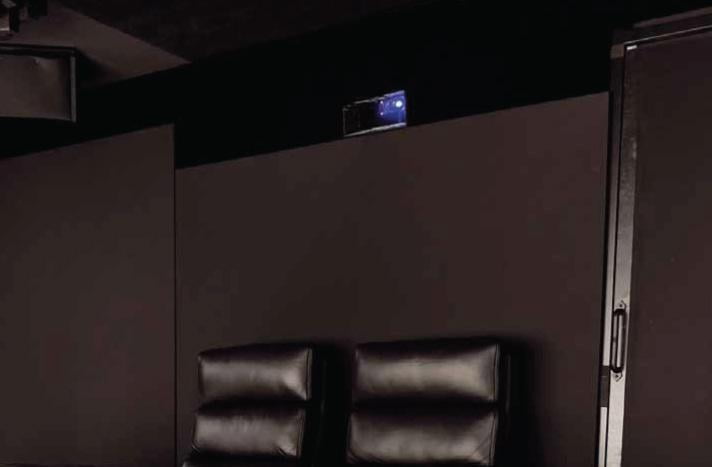 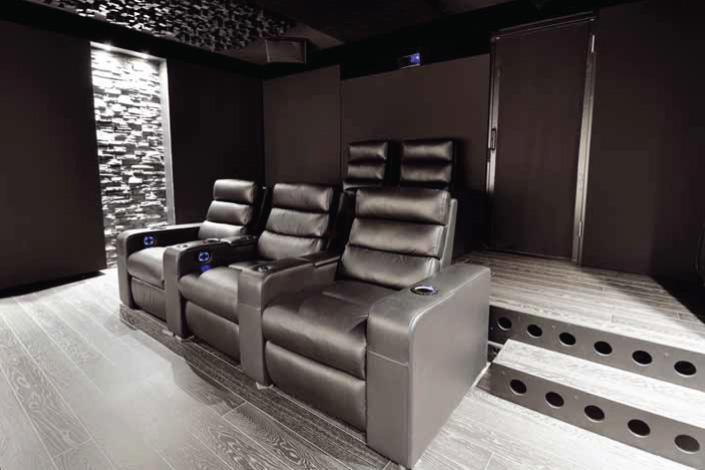 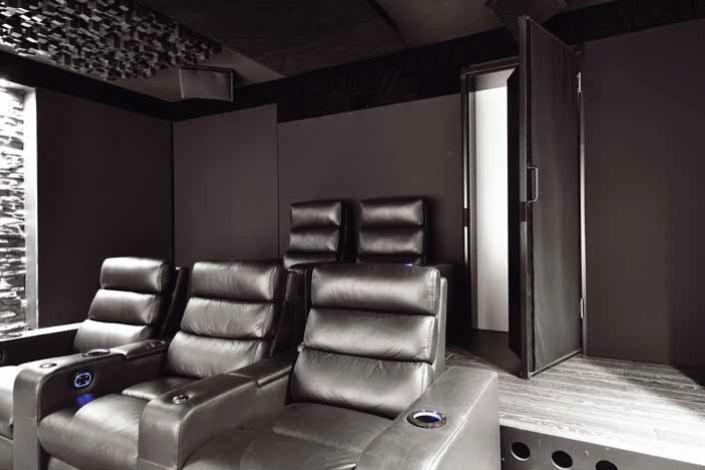 As I enter the spacious movie theater, I immediately notice the new characteristic of the room‘s sound. Behind me, the proud cinema owner closes the door. Since all the technical components, such as the power amplifiers, preamplifier, player, and projector, are housed outside the cinema, the room is entirely silent.

From initial planning to completion, the project took about four years. „Craftwork is not my thing, and I also lack the talent for it,“ laughs the owner of the house. „Planning, on the other hand, gave me a lot of pleasure.“

The installation of the left surround speaker turned out to be a real challenge at the time. The entrance door is located where it belongs. Placing it next to it was out of the question at the time. Also, the speaker should not be moved to its optimal place for every movie night. Therefore, the large surround speaker was installed in the door (see photos). Due to the weight, a special construction and reinforced hinges became necessary. A panel made of acoustic fabric covers the speaker, resulting in a coherent look. In general, I like the fact that almost no technology is visible in the room. I only discovered the four top speakers for Dolby Atmos under the acoustically treated ceiling when I looked very closely.

The owner has rigorously implemented the aspiration for excellent sound. Loudspeakers have been developed exclusively for the cinema, which satisfy his high audiophile demands. This is an individual four-way system with optimized sound radiation characteristics. This is made possible by the chassis arranged according to d’Appolitto. The goal: Horizontally, the speakers radiate evenly wide, vertically evenly narrow. This sound routing reduces unwanted reflections. 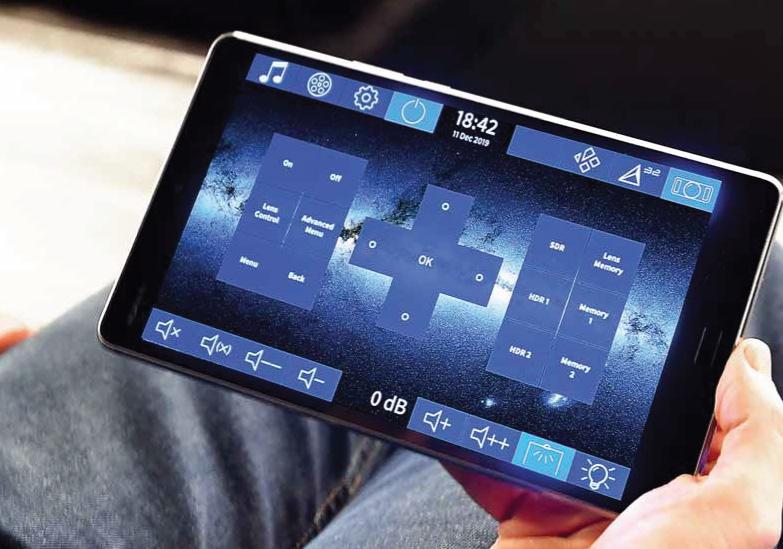 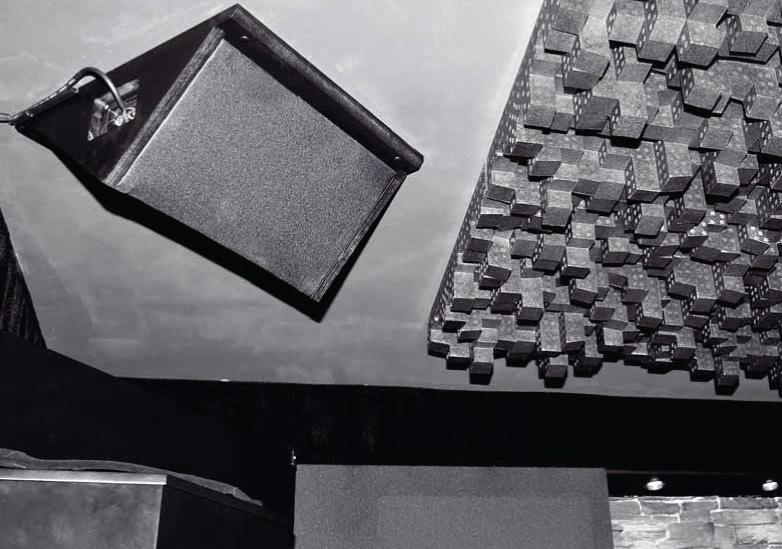 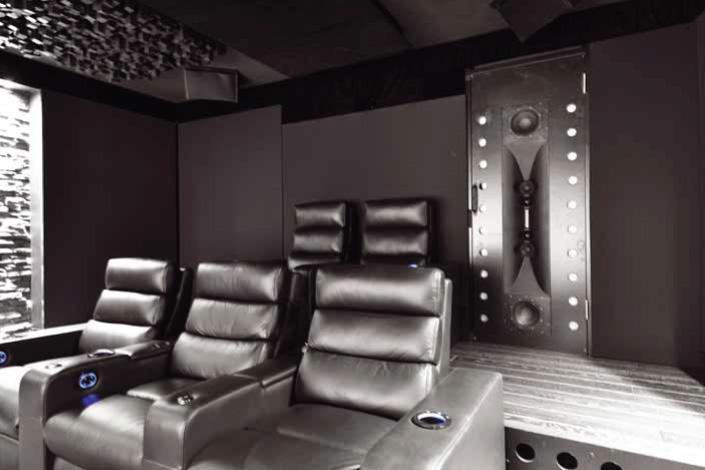 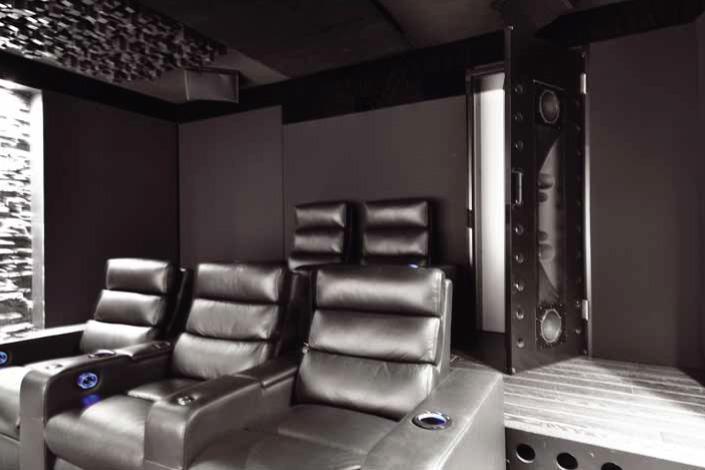 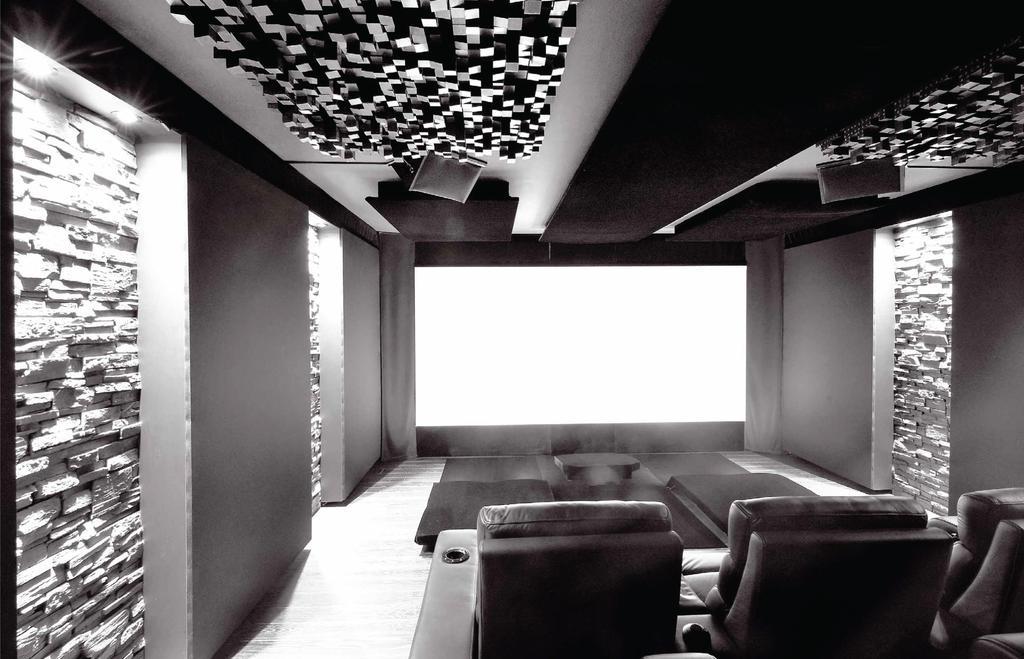 Six of these identical speakers are distributed invisibly around the room. Four of them are recessed as rears at the side and rear. Two front speakers are located to the left and right of the 3.85-meter wide screen. The custommade speakers are not controlled by the preamplifier but by additional mini DSPs. The four paths are thus separated individually with phase and delay time correction. This is not possible with a preamplifier.

Four KEF Q350 are used as top speakers. Their enclosures were also processed so that they radiate directly to the reference position.

Two more speakers are located centrally above and below the screen. They are a double center speaker that repro-duces the dialogues in the movie precisely in between, i.e., at the height of the center of the screen. The speakers are all flush with the walls with acoustic fabric panels. 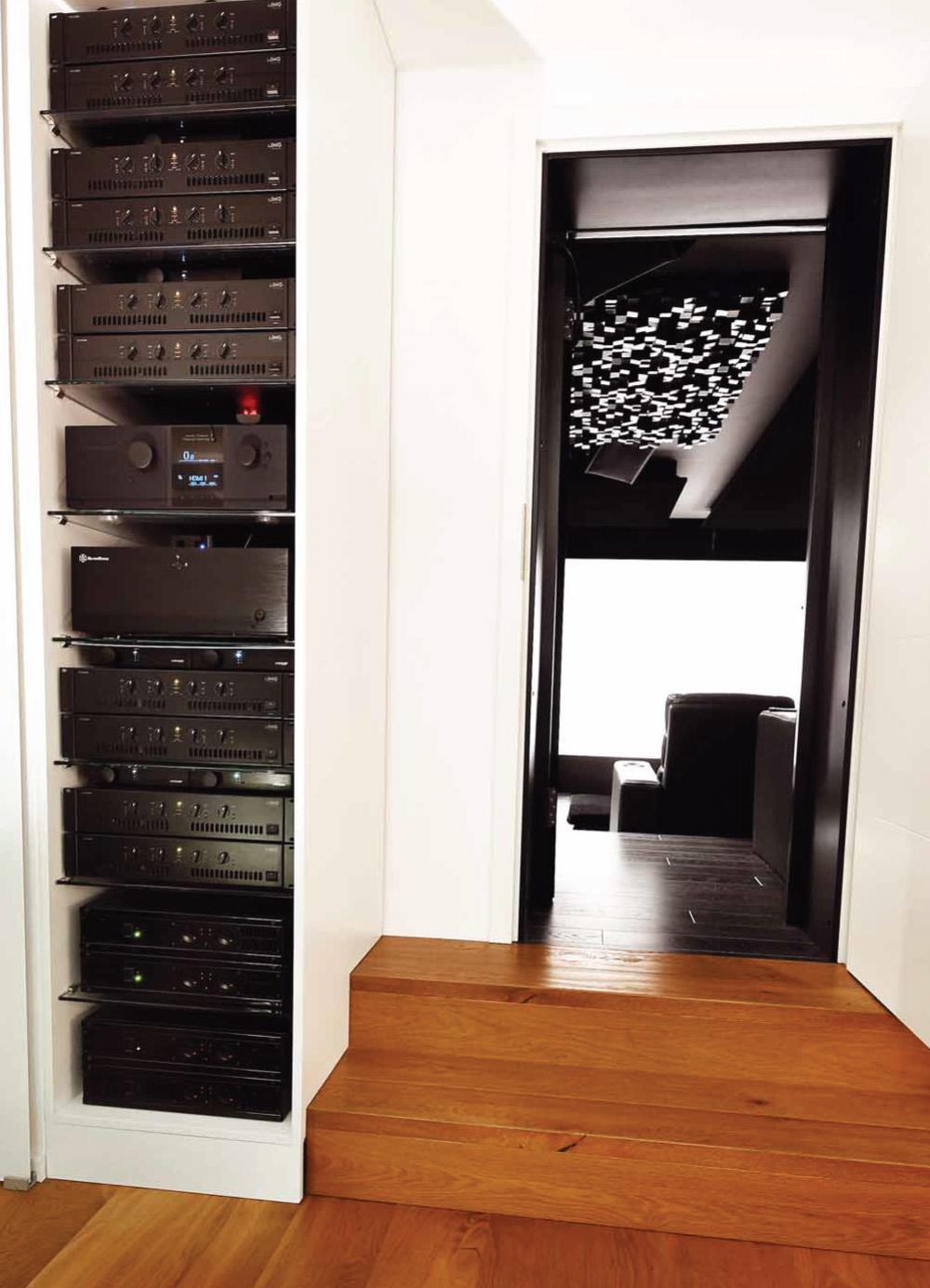 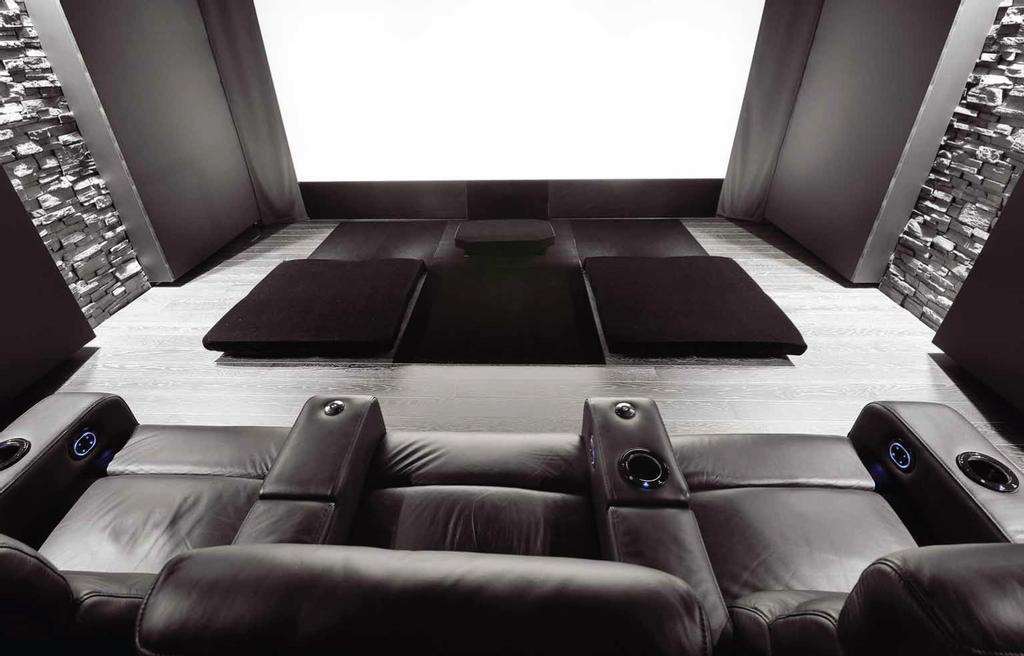 Usually, there is only one center speaker in a home theater that sits centrally under a screen or at 5/8 height behind a sound-permeable screen. Not in this case. The theater owner decided to use a dual center with one speaker above and one below the screen. That makes sense: The screen is not acoustically transparent, yet the sound should come from the center of the image. By using two speakers, it is now possible for dialogues to take place precisely in the center: Similar to classic stereo speakers, where newscasters, for example, can be heard from the center, your double center also creates a phantom sound source. The centered localization remains even when one of the side seats is used since the relative distance to the floor or ceiling center does not change.

The upper center speaker is also part of the Dolby Atmos installation: It acts as a fifth speaker in addition to the four ceiling speakers for the Atmos setup. „The center is indeed designed as a double center,“ the music lover explains to me. „But I additionally count the top speaker as the fifth speaker of the height plane.“ Background: as a preamplifier, the Trinnov Altitude 32 can precisely place object-based sound events from movies in the room. If an acoustic event takes place centered above the screen, that is additionally reproduced by the center speaker above. Clever.

„The room entrance at the back presented some problems for the realization of the DBA,“ reports the proud cinema owner. „To give the DBA back wall a closed surface, I had a second door installed.“

As many as 16 Peerless XXLS 12-inch drivers reside in 70-liter enclosures. Since it is a dedicated DBA arrangement, eight subwoofers are used in the front and eight in the back, which have been placed according to specifications. A few acoustic measures are easy to spot. These include absorbers and diffusers on the ceiling.

„I designed the central ceiling absorber to attenuate the initial reflection from the upper center on the ceiling,“ my host explained to me. Since reflections to the listening position are undesirable, this effect should be avoided as much as possible. There are also absorbers in front of the lower center. With the angled Basotect panel, the reflected sound is not directed towards the reference position but absorbed there. „The reflection problem is thus solved.“ 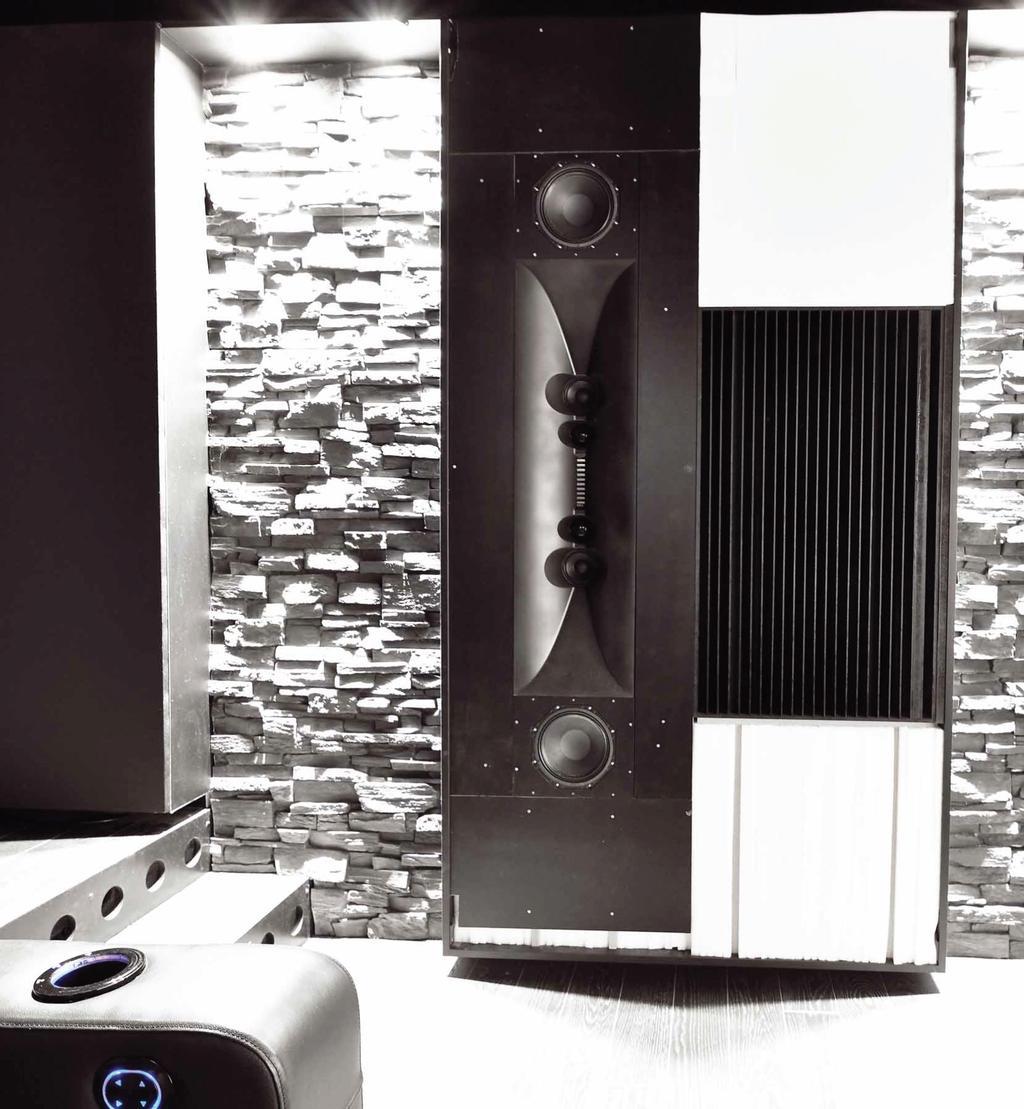 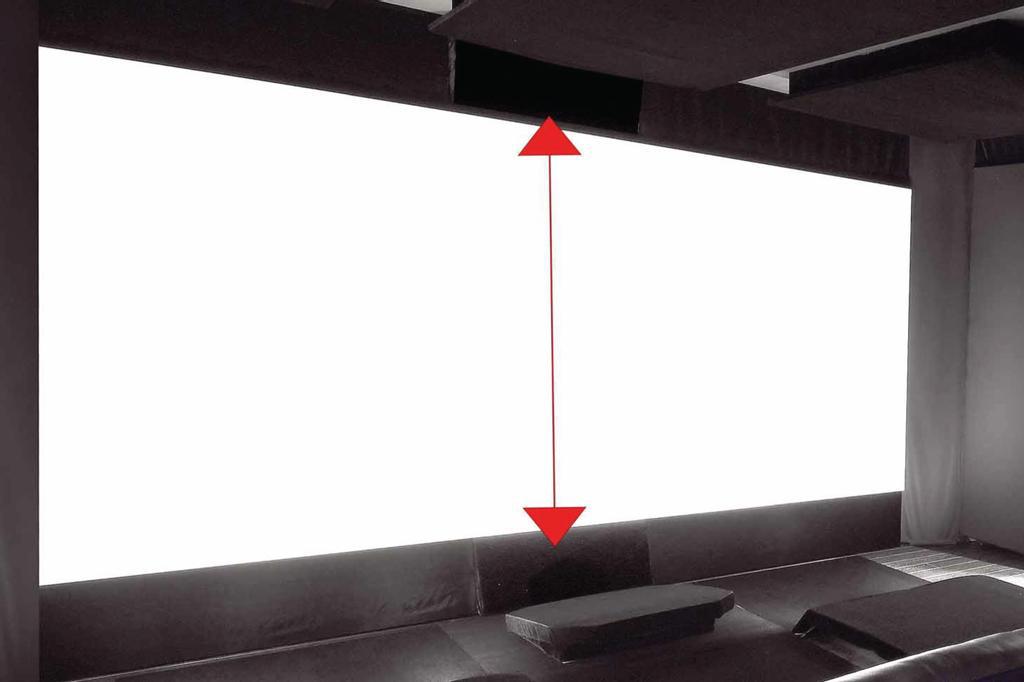 Additional absorbers and diffusers are located on the side and rear walls. These are all covered with black acoustic fabric so that they do not distract from the film action. There is also absorber material under the podiums, which ensures that the seats do not vibrate unnecessarily.

Now the best part of the visit begins: the image and sound check. First, my host starts with stereo music. What an experience! I don‘t miss a thing. Treble, midrange, fundamental, bass, everything sounds perfectly coherent. The performers are in the middle of the stage. If the level increases, the speakers still flatter my ears.

There is no colorationbass drums and the snare sound authentic. Female voices sound realistic as if the performers were standing in front of me on stage and singing live for me alone. Great!

Next up is some rougher fare. The JVC DLA-X7000 projects the 4K version of „Mad Max: Fury Road“ onto the screen. Even the Warner logo shines in magnificent colors. The high contrast range vividly peels out the rust on the „W.“ When Max stands next to his car in the desert, his voice sounds sonorous and voluminous from the front speakers. The voices that now wander around the room are reproduced precisely on and between the speakers. I have rarely heard such a good sound in home theaters. When the pursuers race into the picture with their futuristic cars, the subwoofers of the DBA are in top form. The most delicate low bass gradations are precisely pressed into the room. Perfectly localized effects of the Dolby Atmos soundtrack are perceptible from the ceiling. During the dialogue scenes, the voices are precisely placed in the center of the screen. The double center does an outstanding job here. Even on the seats to the left and right of the reference position, the precise representation is maintained. This is great cinema!

The CINEMA INCOGNITO is an actual high-end home theater that delights with stunning acoustics and an XXL picture. The speakers, specially designed for the room, combine cinema, studio, and high-end sound characteristics. Room design and craftsmanship are flawless. In sum, a cozy movie theater has been created in which blockbusters, concerts, and stereo can be experienced at the highest level.