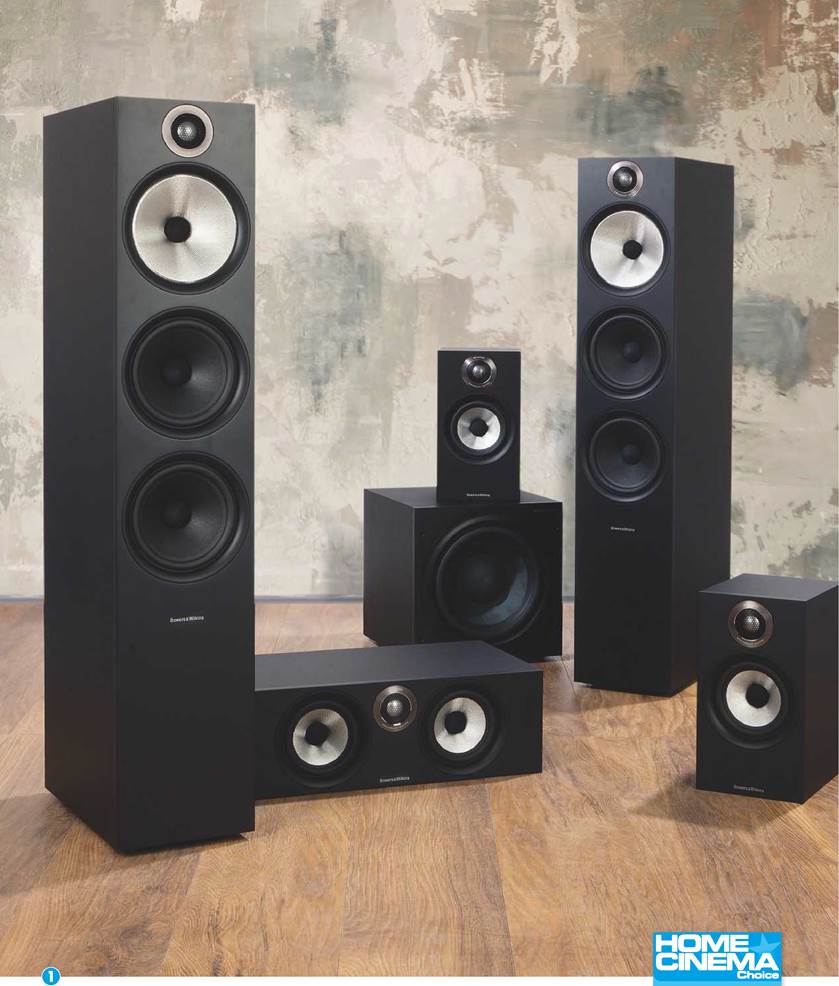 Bowers & Wilkins’ 600 Series is a famed range of entry-level loudspeakers that has long proved an affordable introduction to the company’s sonic charms. For 25 years, the models in this lineup have formed the basis of many a burgeoning home cinema enthusiast’s system – including, once, my own.

So it seems fitting that the company should celebrate its quarter-century milestone with its 600 S2 Series Anniversary Edition, a seventh-generation iteration offering component improvements over the previous version of the 600 Series, which was introduced back in 2018 (and reviewed in HCC #295).

These new speakers don’t look much different physically to the models they replace, and key specifications, including claimed frequency response and sensitivity, are identical. Yet the billing here is of an acoustic upgrade. So what’s new?

Well, firstly, there are some cosmetic tweaks.

The tweeter now features a logo-inscribed surround, and there’s a new oak finish to join the existing matte black (pictured) and matte white options. Buyers in the Asia Pacific region can also opt for a cherry red finish, but there’s no sign of that in the UK.

But it’s on the inside where B&W says it has fine-tuned performance, by virtue of an upgrade to its 600 Series crossover networks. The Mundorf bypass capacitors of B&W’s step-up 700 Series Signature are added here; high-frequency and mid-frequency capacitors have been fettled, too.

B&W claims these changes, while limited due to the fact the 600 Series resides in a very competitive segment of the market, deliver greatly improved resolution and transparency across all the Anniversary Edition models.

In the scheme of things a re-engineered crossover may seem like a minor change, but it’s worth pointing out the previous 600 Series models themselves packed a plethora of upgrades that are naturally still a feature here. These included refinements to the Decoupled Dome tweeter to push breakup to 38kHz, the introduction of Continuum Cone midbass drivers (a tech first debuted on its 800 Series Diamond), and newly designed paper bass drivers on the floorstander model.

All the 600 S2 Series speakers are still rated with a nominal impedance of 8 ohm, and retain the magnetic grilles and dual binding posts of the previous generation. The styling continues to appeal too. This might be B&W’s bottom-rung range, but they share the kind of classy, discreet aesthetic found further up. Overall build quality is impressive, and the trims around the tweeters, and the silver Continuum driver cones, are also saucy, making for a decidedly eye-catching speaker.

The focus of the 600 Series seems to be quality rather than quantity; it consists of just one floorstanding speaker, (the three-way 603 S2), a pair of standmounts, and the HTM6 S2 centre enclosure. There’s no Dolby Atmos add-on speaker.

For those fitting out a multichannel system, B&W sells the Anniversary Edition Theatre home cinema package tested here. This adds an ASW610 subwoofer to a pair of 603 S2s for the front left/ right channels, the HTM6 S2 centre, and a pair of 607 S2s for surround duties.

Stand up and be counted

The 603 S2 tower speaker isn’t huge (it’s a relatively slender 190mm wide) but has a no-nonsense air about it. From top-to-bottom on its front baffle are a 1in aluminium Decoupled Dome tweeter, a 6in Continuum bass/midrange driver, and a pair of 6.5in paper woofers, suggesting an enticing full-range performance – something mirrored in its respectable 48Hz claimed low-end reach. The rear-ported cabinet is supplied with a plinth stand [not photographed] for added stability, which is just as well because you wouldn’t want this falling on your foot. Suggested sensitivity is 88.5dB.

The HTM6 S2 features a pair of smaller 5in Continuum bass/midrange drivers, a 1in aluminium tweeter, and claims a sensitivity of 87dB and frequency response down to 72Hz. The 607 standmount partners a single 5in bass/mid driver with a 1in tweeter in a classic two-way configuration. Sensitivity is marginally down at 84dB; low-end reach is rated at an impressive 52Hz. Both speakers are ported.

B&W’s ASW610 subwoofer hasn’t received an Anniversary Edition do-over. This sealed sub uses a forward-firing 10in paper/Aramid fibre cone driver, powered by a 200W Class D amp. It’s part of the company’s affordable range – below the premium DB series – and flanked by the 8in ASW608, and beefed-up ASW610XP. The styling of these matches the rest of the 600 Series, and there’s a choice of matte black or matte white finish.

Around the rear is a typical set of controls, including line and speaker volume, low-pass frequency settings, and a low-pass filter. There are also three bass extension settings, two EQ offerings, and a 0-180 phase switch. A 12V trigger enables system integration. The sub comes with both spikes and rubber feet, the latter handy if you don’t want to dig holes in your floor.

‘If you give them plenty of power they’ll sing, producing a wide soundstage with musicality and punch’

For the purposes of this audition, I tested the system in the standard 5.1 setting, using my reference Lyngdorf MP-60 processor and Emotiva power amp. I refrained from employing room correction, thus retaining the inherent qualities of the speakers, and I placed the ASW610 in a spot I knew was balanced in terms of bass response.

My most recent experience of B&W’s 600 Series was with standmount speakers fore and aft. Here I had floorstanders up-front, and as soon as I sat down to listen I realised these new-generation towers are simply awesome. If you give them plenty of power they’ll sing, producing a wide soundstage with a pleasing degree of musicality and energetic punch. They also have significant bass extension, with the two low-frequency cones providing plenty of depth.

I popped on Good Luck, Seeker by The Waterboys (CD), and was delighted by the exceptional stereo imaging and undeniable clarity and purity. The Continuum drivers deliver a mid-range that sounds clean and neutral, allowing me to better enjoy Mike Scott’s vocals and his eclectic choice of instruments. Rockers like My Wanderings in the Weary Land are delivered with an aggressive dynamism that emphasises driving guitars and thunderous drums. More gentle numbers like Low Down in the Broom benefit from a delicate handling of acoustic guitar and fiddle.

The 603 S2s sounded so good on their own. Could they combine with their smaller partners to produce an enveloping and cohesive soundstage? The answer was a resounding yes. The use of the same tweeters, and closely related bass/mid drivers, across all models undoubtedly helps. I experienced a sense of tonal balance without recourse to any room correction. The system also lapped up power from my Emotiva amplifier, allowing it to energise the room with an exciting and controlled presence. 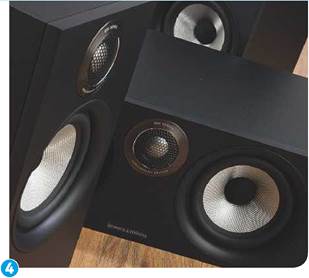 Nothing lends itself to surround sound as well as a submarine movie, and the Blu-ray of Tony Scott’s Crimson Tide is a great example. There’s plenty of aquatic action, allowing the B&W system to completely submerge you in an underwater environment. There are also some excellent sound effects designed to sell the illusion of being inside a large tin can, especially as the submarine dives and the hull buckles under the weight. A battle between the titular vessel and a Russian hunter-killer becomes a showcase for the 600 S2 Series’ talents. Torpedoes glide across the room with an elegant precision, underwater explosions erupt in all directions, and the damage to the sub’s communications room is accompanied by metallic bangs and fizzing sparks that leap from the soundstage. Within all this action, the speakers themselves retain a neutral and precise composure.

On to Whiplash (Blu-ray), a film about the trials and tribulations of an ambitious jazz drummer. Unsurprisingly the soundtrack frequently demands deep, tight and well-integrated bass. This array generally handles the complex syncopated action with skill, attacking the drum rolls with the same aggression as the film’s protagonist and bringing a distinct feel to high-frequency cymbal hits.

This accomplished low-end performance is primarily thanks to the impressive floorstanders, and at times I couldn’t shake the feeling the ASW610 is slightly underpowered when paired with these towering three- ways. I’d possibly be inclined to build a system around the beefier 500W ASW610XP, although that model does command a £ premium.

It wouldn’t be proper home cinema without a few pyrotechnics. Full Metal Jacket (4K Blu-ray) is broken down into two distinct halves, the first chiefly driven by dialogue. During the training sequences on Parris Island, the venomous insults of Gunnery Sergeant Hartman are projected with unflinching and often hysterical accuracy. B&W’s HTM6 S2 centre is compact enough to fit into most installations, but has a big and focused delivery.

The second half of Kubrick’s war drama centres on the Battle of Hue, and it’s during these sequences that the 600 S2 Series throws its weight around. ‘Animal Mother’ strafes a building with his heavy machine-gun, and as the rest of the squad join in and bullets pepper the facade, the power of all that ordnance is writ large, thanks to this system’s huge front presence. There’s also an intangible quality to these speakers that’s best described as ‘fun’ – they create a soundstage that’s just enjoyable, and one

that draws you effortlessly into what you’re watching/ listening to. A Halloween re-visit of Kubrick’s The Shining (4K Blu-ray) found Wendy Carlos’s unnerving score filling my room (and me) with dread, and the speakers handling the mix’s excellent, if rather shocking, use of dynamic range with aplomb. My stay at the Overlook Hotel was a suitably unpleasant one.

The tweaks made to this Anniversary Edition aren’t major, and without a direct comparison it’s hard to tell how the new crossover network improves the sound performance over the previous 600 Series. But given the older generation already sounded transparent, precise and on-the-money, this refreshed range doesn’t really need to rewrite the rulebook. What you’re left with is a well-engineered and attractively designed set of speakers that deliver high- quality sonics with poise and sophistication, while staying on the right side of affordable. Personally, I can’t think of a better way to celebrate their 25-year journey ■

Made for movies and music, this 5.1 pack has gorgeous looks, exceptional build quality and sounds sublime. As birthday presents go, it's far better than a pair of socks.

4. ‘Anniversary Edition’ branding is now inscribed on the tweeter surrounds