Bowers & Wilkins’ performance in the headphone market is the sporting equivalent of a Gaelic footballer arriving in the Premier League and picking up the Golden Boot in their first season. Sure, there are similarities between the two sports, but essentially it’s a different game with different opposition, different rules and different demands.

But ever since B&W’s first pair of headphones arrived on the scene in 2009, the company hasn’t looked back. Some of its models have had as much impact as B&W’s traditional loudspeakers did in that market, and the new Bowers & Wilkins PX – the company’s first wireless headphones with built-in noise-cancelling – are the latest in a long line of impressive products.

To anyone acquainted with B&W’s line of on- and over-ear headphones, the PXs will look familiar. But while they share some of their predecessors’ DNA, they’re also quite distinct in their own right.

The Space Grey finish of our review sample may look like an attempt to appeal to Apple fans, but it also highlights the PXs’ more industrial design. That’s not to say the headphones don’t have shelf-appeal, but the optional (and much more flamboyant) Soft Gold finish shows off your PXs better.

The headphones are constructed predominantly from lightweight aluminium and use what B&W refers to as “ballistic nylon shell” to cover the outer ear pads and the top of the headband. This means the PXs feel both reassuringly solid yet perfectly portable.

Subtle details, such as the way the headphone cables run down their carefully machined channels and into each earpiece, the smoothness with which the earpads rotate, and even the texture of the Bowers & Wilkins logos, all give the impression of a quality product.

The elliptical earpads are quite narrow compared with those offered by some rivals and we were a little concerned that comfort could be compromised. But, once in place,

they actually do an excellent job of surrounding your ear and creating a seal from the outside world.

The PXs exert more pressure than rivals such as the Sony WH-1000XM2s and the pads aren’t quite as soft, but we don’t find our lengthy listening sessions any less enjoyable because of it. The only slight compromise is that you can’t completely fold them up. Instead, the earpads fold flat so you can slide them into the snazzy, quilted carry pouch.

Pull away the magnetic pads and you get a better idea of the PXs’ driver design. They use a 40mm full-range driver, based on technology developed for B&W’s high-end P9 Signature headphones. Like the P9s, the PXs’ drivers are angled to fire directly into your ears. B&W claims this helps you get a more traditional stereo image.

“It’s difficult to call the PXs out on any aspect of their audio. They paint music in a clear and clean manner, which helps resolution and detail retrieval”

As wireless noise-cancelling headphones have become more commonplace and desirable, increased emphasis has been placed on the user experience – including issues such as the pairing process, the reliability of the Bluetooth connection, ease of controlling audio playback and the performance of the noise cancelling.

The B&W PXs fare extremely well across the board. Pairing is achieved through the slider button on the edge of the right earpiece. A row of three slimline buttons controls volume and playback. The middle play/pause button has a slight bump to help you feel your way around.

The noise cancelling for the PXs comes courtesy of B&W’s own algorithm. There’s no automatic test tone and measurement-taking like with the Sony WH-1000XM2s, but the B&W’s still do a great job of cutting out the drone of your daily commute.

Fire up the B&W Headphone app and you can fine-tune the PXs’ Environment Filters. Labelled Office, City and Flight, each one tweaks the noise-cancelling and amount of external audio allowed through.

Set it to Flight and the noise cancelling is at its most potent, with no audio pass-through. When you’re walking through town, switch to City and you’ll still get the benefits of noise-cancelling, but with a greater awareness of your surroundings.

It’s similar to the system used by the Sony WH-1000XM2s, with the exception that the Sony app can switch modes automatically. The PXs, however, require you to open the app and switch manually.

Built into each enclosure is a proximity sensor that B&W has used to supercharge the PX user experience. Lift the headphones off your head and the music pauses automatically. Put them back on and the music kicks back in.

If you leave them on a desk or round your neck for a few minutes, the PXs go into what B&W refers to as a “low-power state” – which should help conserve some of the claimed 22-hour battery life. Put them back on your head after a couple of minutes and the headphones ping out a couple of tones to show that they have woken up. They will then start playing your music without you having to press a single button. Very slick.

We find ourselves surprised by just how well this feature works in practice and how often we use it. But there’s more. Lifting one of the earpads can also pause the music, which is ideal if you need to have a quick chat with a work colleague or order another gin and tonic from your friendly flight attendant. It’s a smart feature that helps the PXs stand out from the current crowd. 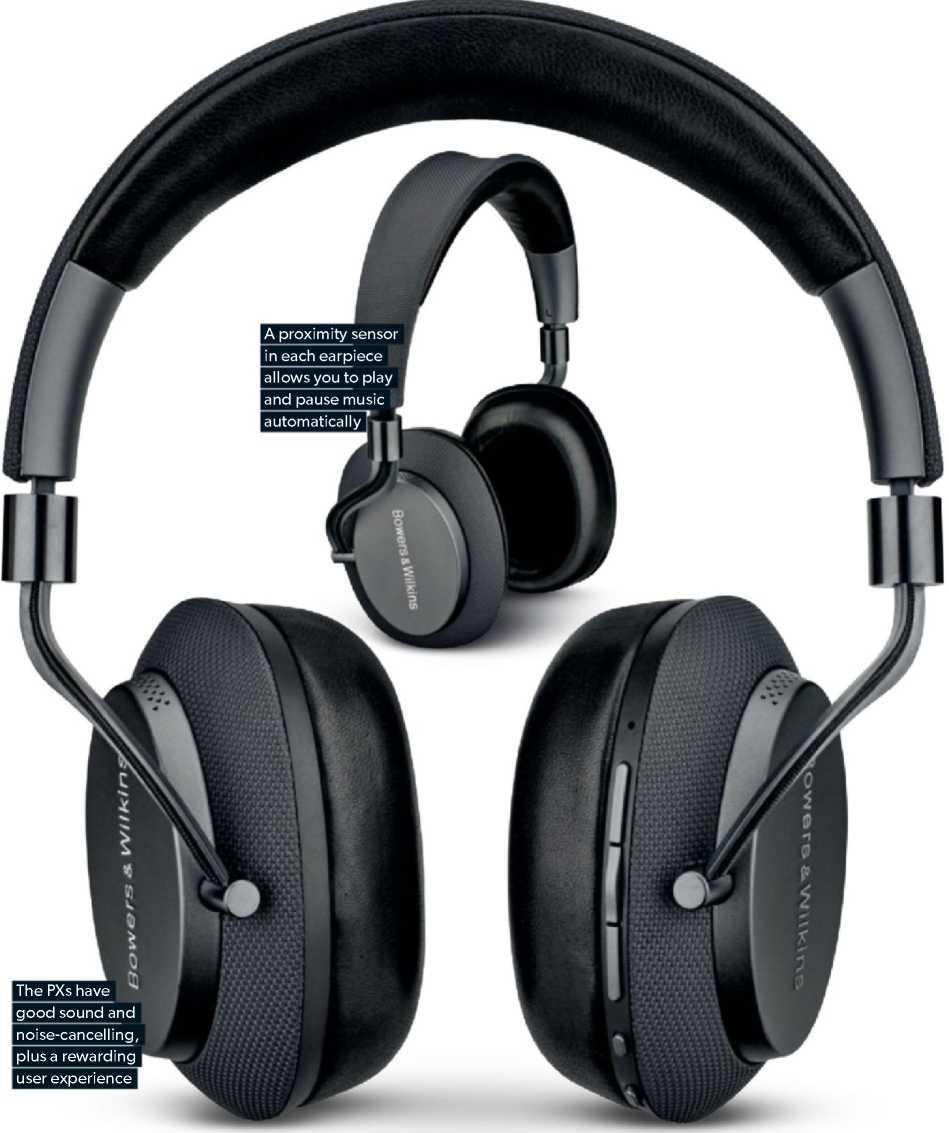 So, the B&W PXs appear to be making all the right noises (and cancelling a few out), but how do they actually sound? The good news is that anyone wanting transparency, detail and an even tonal balance from their headphones won’t be disappointed.

It’s difficult to call the PXs out on any aspect of their audio. Their presentation is different from the Sony WH-1000XM2s and Bose QC35s, but it’s just as appealing. They paint music in a clear and clean manner, which helps where resolution and detail retrieval are concerned.

Poorer-quality recordings sound just that, but that’s the trade-off you get for the PXs’ having an honest approach. Music sounds as though it’s coming at you head- on rather from the sides, which seems to validate the design of those angled drivers.

The B&Ws follow the melancholic melody of Linkin Park’s Leave Out All The Rest with expert precision. The shift from fragile and emotional verse to explosive chorus is delivered with finesse and purpose. The big bass kick has a nice heft to it, without it ever threatening to overpower the track. The PX’s punch and precision ensure an impeccable sense of timing.

We switch to the London Symphony Orchestra’s adaptation of Swan Lake and the PXs reveal their sophisticated, elegant side. As the track reaches its climax, they do a great job of balancing the impact of the powerful rumblings on the percussion section. All the individual elements, such as the harp, violins and oboe, are exquisitely rendered and the track has no trouble captivating the listener.

A pair of quality headphones such as the PXs serves only to enhance B&W’s reputation. Excellent sound quality, fine noise-cancelling and a rewarding user experience make the Bowers & Wilkins PXs an all-round fantastic audio package.

The PX is a fantastic package, with excellent sound quality, successful noise-cancelling and a smart design