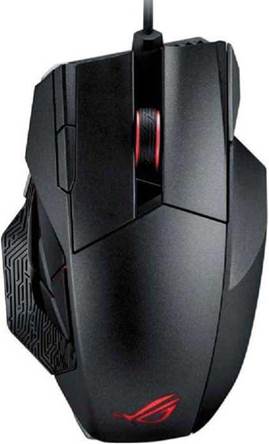 nhe ROG Spatha is an all-out attempt by Asus to create the ultimate wireless gaming mouse. Just the sheer mass of extras packed into the box is impressive. Open it up, and you’ll find the mouse, a charging dock, a stand for the dock, a cable for both the mouse and the dock, a pair of alternative Left/right button switches, a mini torx screwdriver for dismantling the mouse, a couple of ROG logo stickers and a neat case to store all those accessories.

The idea behind several of these extras is that you can customise the mouse. Unscrew the four screws holding this mouse together and you can lift off the top and right sections. You can then have the access required to swap out the switches, which just push into place, and Asus provides 3D printing files for designing your own replacement for the right-hand side section.

The features list doesn’t end with the accessories either. On the mouse itself, you get six extra buttons over and above your regular left, right, back, forward and so on.

It’s impressive stuff, but it all falls down in the execution of the final product. Fora start, whether due to the customisation of the choice to use a metal framework, the mouse ends up being huge and heavy. Weighing in at 179g and measuring 135 x 90x43mm, making it far and away the biggest mouse on test.

This size makes it potentially awkward enough for many users, and all those extra buttons under your thumb don’t leave you with anywhere to properly grip the mouse. The only way we found to do so was to squeeze on the sharp edge of the chassis right in front of the mass of buttons, which wasn’t a particularly practical or comfortable option.

Of course, your mileage may vary depending on your hand size, but it seems unlikely the shape and layout of this mouse

will find widespread appeal. The quality of the extra buttons is also questionable, with the switches feeling a bit mushy and indistinct. The main braided cable was also disappointingly stiff and kinked.

ALL of which is a shame, as the mouse performs fine. Its wireless connection was fast and reliable and it tracked well enough, 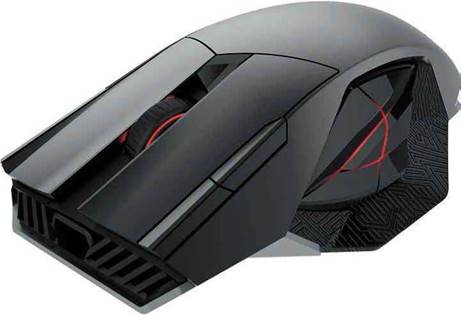 Definitely a try-before-you-buy product, this mouse has loads of extras, buttons and customisation options, but it’s ergonomics are questionable.

even if it did suffer from the usual occasional jittering problems of Laser sensors. Despite its ergonomics, the aesthetic design of the mouse has a certain angular appeal and build quality can’t be faulted, so there’s certainly plenty of positives here.

However, the whole product ends up being a bit of a curate’s egg, and all the extras and positives can’t make up for the fact that the ROG Spatha is just not an ergonomically well- designed mouse.

Asus has thrown everything including the kitchen sink into this mouse, but it’s Lost sight of getting the basics right in the process. This mouse is too Large and heavy for the majority of users, and its mass of extra buttons are poorly positioned and of middling quality. It’s a shame, as with a better mouse design, the Asus ROG Spatha could be a great package. As it is, its appeal is pretty niche.