The AVR390 is a welcome attempt on the part of Arcam to offer many of the benefits of its premium AVR850 at a more affordable price. The cheaper model is almost identical to its expensive sibling, boasting exactly the same utilitarian but well-made chassis, simplified connections and features. 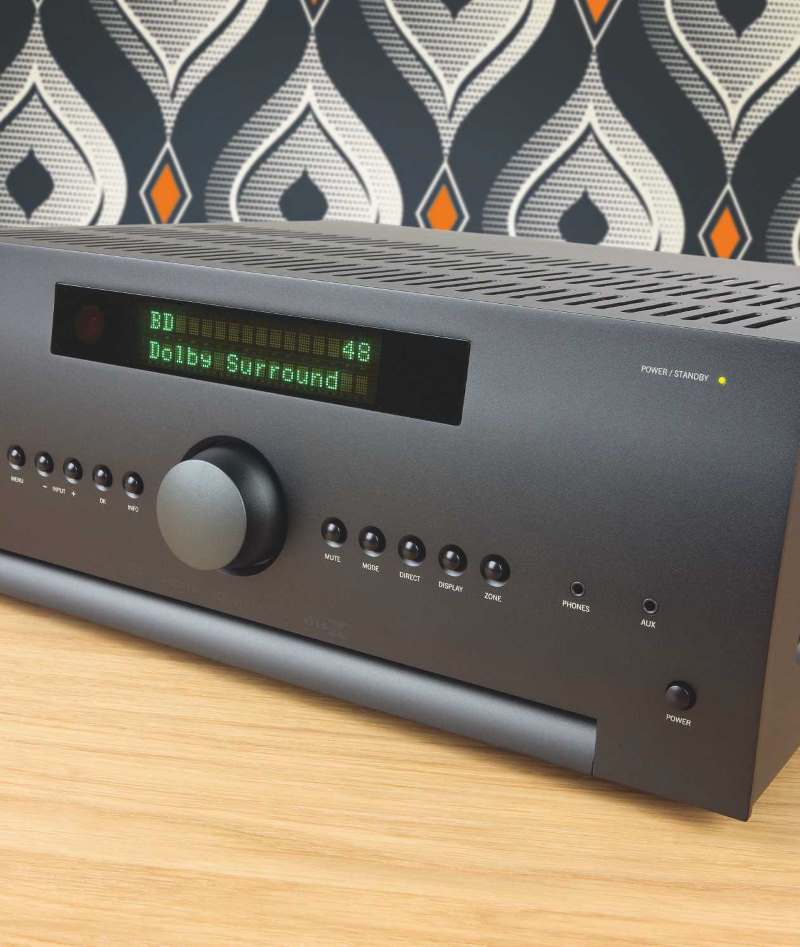 2. The front-panel design mirrors that of the AVR850

In fact, this is an entry-level product in name only, with the kind of processing and room correction capabilities that other AV receivers can only dream about.

So what’s the catch? To get the price down, Arcam has swapped out the amplification for something with a little less grunt. That means the expensive Class G amplification is gone, replaced by cheaper and more conventional Class A/B.

You can buy a cracking set of speakers for that kind of money. In addition, since the AVR390 has 7.1.4 pre-outs, there’s nothing stopping you from upgrading the amps later. In fact, if you don’t need XLR connections, it’s even capable of giving high-end AV processors a run for their money.

A cursory glance at the specs and you realise that the AVR390 has some genuinely high-end features, including Dirac Live, a sophisticated piece of room correction software. A few years ago, the inclusion of Dirac would have been unthinkable on a receiver at this price point, and it immediately gives the Arcam an edge over most of its rivals.

Having said that, the AVR390 isn’t exactly feature-packed compared to most AV receivers. Arcam has kept things simple to concentrate on what’s important.

There’s full 7.1.4 decoding of Dolby Atmos and DTS:X, with upmixing for non-immersive audio soundtracks (there’s no Auro-3D decoding, but that’s no great loss). Other features are Spotify Connect integration, an FM/DAB tuner, Ethernet control, and support for Arcam’s MusicLife UPnP/ control app, which is currently only available for iOS.

Arcam has also extended its no-nonsense approach to the connections, with the emphasis on HDMI. The AVR390 has seven HDMI inputs and three outputs, one of which supports ARC.

The most obvious limitation is that the AVR390 only has seven channels of built-in amplification. While this is true of all of Arcam’s AV receivers, it does mean you’re limited to a 7.1 or 5.1.2 speaker configuration out of the box. You can always add more amps, but that increases system cost and puts the AVR390 at a disadvantage to something like Denon’s AVR-X8500H, with its 13 powered channels.

Setup is straightforward, requiring a bit of common sense rather than a PhD. The remote is nicely designed, but the user interface feels dated and needs an overhaul. On the plus side, at least it’s simple to follow. I initially tested the AVR390 in 7.1 and 5.1.2 setups, before adding an Arcam P429 four-channel amp and running a full 7.1.4 system.

Despite its acoustical sophistication, Dirac is well-designed and surprisingly easy to use. Arcam includes a calibrated microphone for taking measurements, but since there’s no Wi-Fi you’ll need a wired network connection to actually run the room correction software.

The good news is that after about thirty minutes you’ll be done, and it’s definitely worth it.

There’s no doubting Dirac’s wizardry: turn it on and the room disappears, leaving a detailed and tonally balanced soundstage that is delivered with exceptional clarity. Dirac’s room correction also does a wonderful job of integrating the subs with the rest of the system, keeping the bass both smooth and even but still powerful.

I gave the AVR390 a thorough 7.1-channel workout using the opening scene of Dawn of the Planet of the Apes on Blu-ray. The film’s audio is a masterclass in sound design, one that the Arcam graduates from with honours. Despite the presence of rain falling on all the channels and thunder rolling around the room, you can clearly hear the subtle breathing of Caesar as the camera pulls back from his eyes.

A choral arrangement in the background gradually rises in the mix as the apes move almost silently through the trees. Then as the hunt begins, the entire system bursts into life, surrounding the viewer with a cacophony of simian sounds that here retain a marvellous sense of spaciousness.

This opening scene is a fantastic test of everything from detail retrieval to precise effects steering and dynamic range. The amplification may have been downgraded to Class A/B but this AVR still has sufficient power to drive a decent system in a medium-sized room.

In order to evaluate the AVR390’s immersive audio capabilities I started with Everest (Blu-ray), which has a fantastic Dolby Atmos mix. In a 5.1.2 configuration the Arcam scaled the heights in the scene where the storm hits the climbers, blasting them with snow and ice and tearing the sky with lightning and thunder. And yet within the terrifying grip of the storm, dialogue was clear and the various effects were located with accuracy.

When I switched to a full 7.1.4 system the limitations of the previous arrangement became more obvious; now sounds were spread evenly overhead, and effects were steered with greater precision around the room. The result was incredibly visceral, revealing the full breadth of the object-based audio’s capabilities, and delivering an experience so realistic that I was in danger of developing hyperthermia and hypoxia.

The 4K Blu-ray of Atomic Blonde, and its no-holds- barred DTS:X soundtrack, came next. LFE is used in this spy caper to add weight to every savage punch and kick, delivering them with a solid percussive thump. This is particularly true during the protracted fight in the apartment block, as Charlize Theron kicks ass and takes names.

The AVR390 not only displayed its ability to steer effects, integrate bass and keep dialogue clear, but also showed skill with transients, instantaneously reacting to sudden bursts of sound like gunshots. And, as is typical for an Arcam receiver, it also showed a pleasing musicality, effectively delivering the music that peppers the soundtrack (David Bowie’s Cat People sounded particularly good).

The big question is: how does Arcam’s AVR390 compare to its more expensive big brother? Well, I use the AVR850 every day as part of my reference system, and there’s no doubt that it has greater horsepower under the bonnet, with increased headroom and a better transient response, and is better suited to larger systems.

That being said, the AVR390 doesn’t exactly feel underpowered and it has the same processing and room correction. It’s also worth remembering that even if you do opt for the AVR850, you’ll still have to budget for additional amplification to run more than seven channels.

Overall, this receiver delivers exceptional value considering its build quality, features and capabilities, and offers the potential of high-end performance at a mid-range price

The combination of effective processing and superb room correction make this impressive AV receiver a great choice if your focus is performance rather than bells and whistles.

Arcam AVR390 Open Box 11.2 Pre-Amplifier / 7 Amplifier Channel...
As one of the very few audio specialists in the world to design AV receivers, Arcam has developed a reputation for balancing a finely honed technical specification with world class audio performance. The AVR390, AVR550 & AVR850 are, quite simply, the highest performing AV receivers Arcam has ever...
$1,249.00 $2,500.00
out of stock

A clever idea from Arcam, the full-width, half-height P429 packs the necessary four amplifiers to create 11-channel systems with its seven-channel AVRs.

Not cheap, but offers plenty of Class G grunt.

3. The AVR390 has no analogue video inputs at all. It’s HDMI or bust